The Indian capital is a vast and overwhelming city. The big sights are well known, but lots of other things you’ll have to discover for yourself. Trot Op! lends you a helping hand, and showcases three alternative things to do in New Delhi.

* Look at the bottom of this article for a disclaimer on the current situation in New Delhi.

“You only need three things in Delhi,” my driver shouted as he slammed his rickety tuktuk in between two moving trucks: “Good horn, good brakes, good luck!” I had just landed, it was after midnight and I had almost crapped my pants out of sheer terror without even touching the street food. I was in my late twenties. There was a bit more hair on my head, I weighed about ten pounds less and my career as a travel journalist was – like my sexuality (ladies!? ^^) – still in an explorative phase. I found myself with two full weeks to spend in New Delhi, and no real idea of what to do with my time.

“You only need three things in Delhi,” my driver shouted as he slammed his rickety tuktuk in between two moving trucks: “Good horn, good brakes, good luck!”

I was supposed to be in India to attend a travel trade show, but it got cancelled right after I booked my flights. I decided to make the best of the situation and found myself a room. Smyle Inn (that is indeed how you write it) became my home away from home. A cheap but decent hostel in a dark alley in Paharganj: a bazaar just outside of the old centre, and one of the city’s busiest and most colourful neighbourhoods. Armed with some books, a gallon of sunscreen and a family pack of imodium, I felt ready for what would prove to be the biggest culture shock of my life. 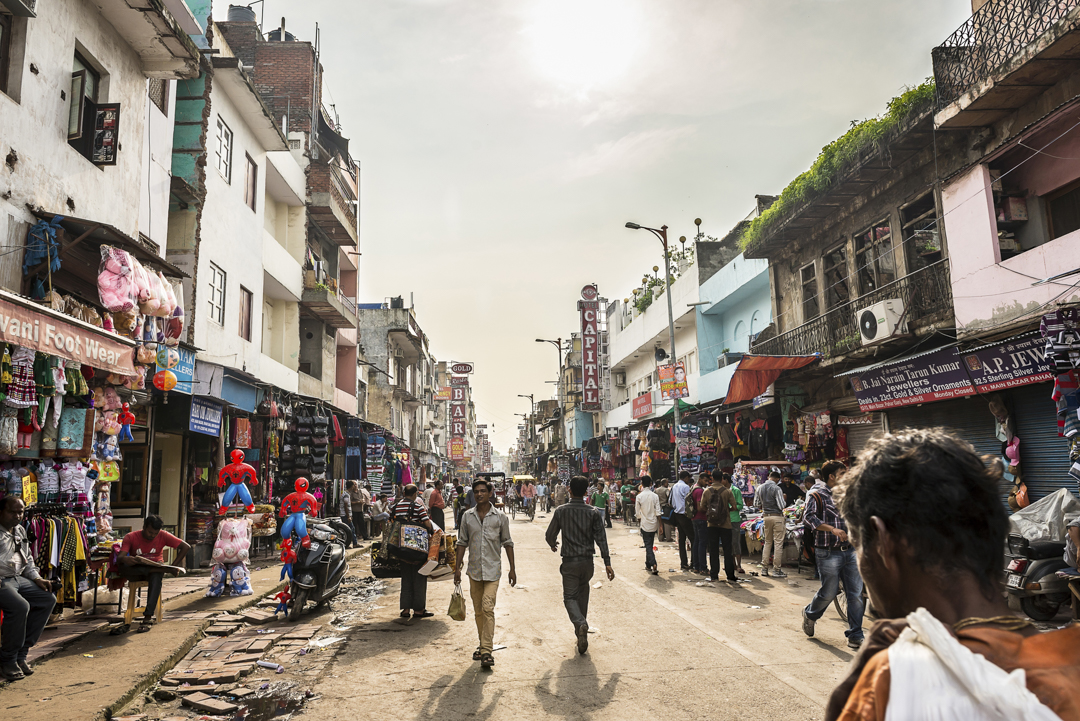 Delhi is one of the busiest and most chaotic places I’ve ever set foot in. Want to experience this first hand? Try taking a metro at rush hour. In most other Asian countries, people will patiently wait their turn to get on the train; here every boarding procedure comes with a massive two-way rugby charge. Pulling, pushing, scissor tackles, atomic wedgies: you’ll get to see it all. And yet everybody looks like they’re having the time of their lives. They’ll crawl up and over each other just to get to work, all while joyously smiling from ear to ear. “First time ey?”, the friendly student whose rear I was forcibly pushed into asked me. “Yup”, I said, as I tried to visualise some very unpleasant scenes in order not to cause him any further inconvenience. 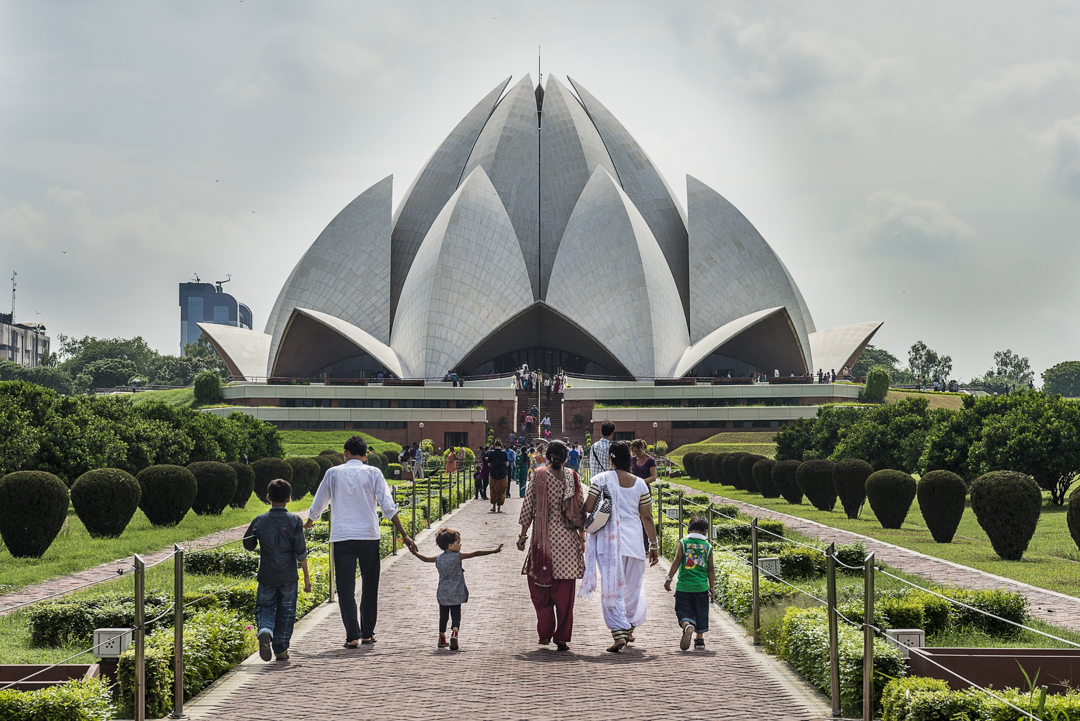 It might be completely mental, but culturally and historically New Delhi is one of the richest places on earth. Throughout the course of history, half of the city was demolished and rebuilt at least seven times, and for millennia multiple different cultures have lived here together – sadly not always peacefully*. Alexander the Great and his army fell just short of conquering it, but Hindus, Buddhists, Muslims and ultimately with the British also Christians, all built powerful kingdoms here. Sights and remnants from almost every period can still be found, and between the slums, colourful markets and holy cows you can discover an impressive collection of historic treasures. More on those later in another article, let’s go for some off the beaten track stuff first. Here you go: three alternative things to do in New Delhi. Thank you, come again! 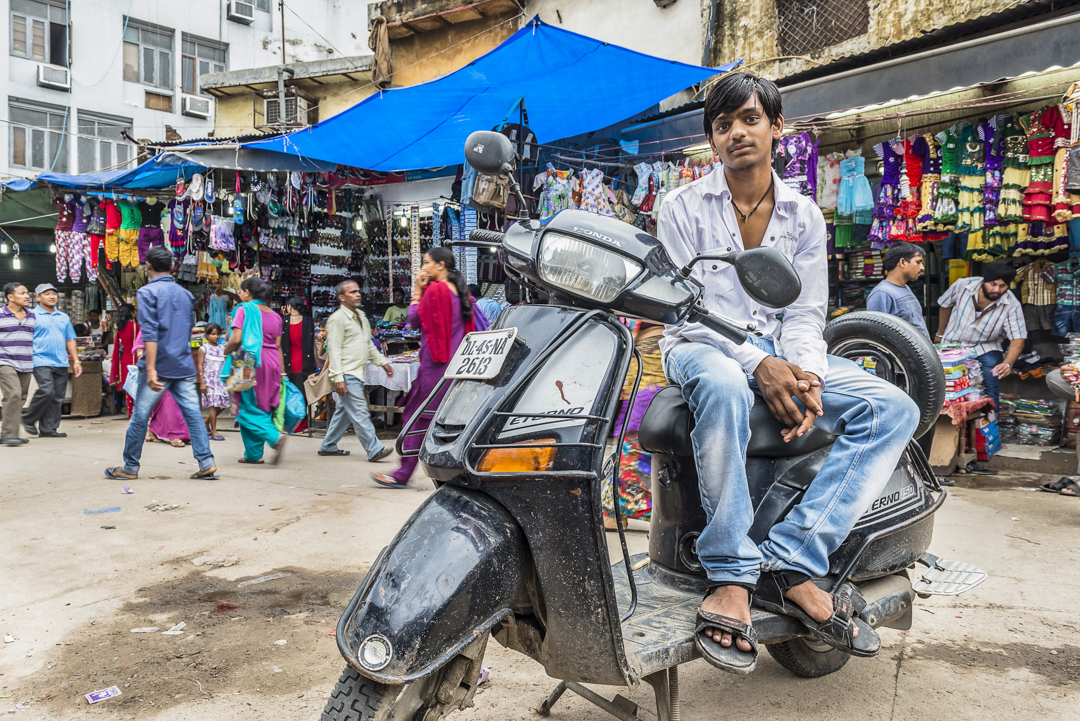 Delhi is a fascinating city, but some of the things you’ll see on its streets will haunt you. Crippling poverty is everywhere. It is estimated that more than 200,000 people live on the streets here, of which 75,000 are children. Those aren’t happy numbers, and in my opinion they could even be an underestimation. Several organizations try to improve the fate of the homeless, and Salaam Baalak Trust is one of the best. They provide shelter, care and education for as many street children as possible.

“Delhi is a fascinating city, but some of the things you’ll see on its streets will haunt you.”

Salaam Baalak Trust also organizes guided tours through the slums. These are led by young adults who used to live on the street themselves, but were educated and employed by the organization. This is no disaster tourism, but it will leave its mark on you. The guide’s personal anecdotes are humbling and disquieting. You’ll learn how street children get their money, how they spend the days and what you should and shouldn’t give them as a passer-by. Not everything is doom and gloom however. You also discover a lot of funny little facts. The colourful deity tiles hanging in some of the alleys for example, prevent god-fearing drunks from using the wall as a urinal. After all, anyone accidentally taking a whizz into Kali’s face, should not get their hopes up as far as further reincarnation goes.

“The colourful little deity tiles hanging in some alleys, serve to prevent god-fearing drunks from using the wall as a urinal. After all, anyone accidentally taking a whizz into Kali’s face, should not get their hopes up as far as further reincarnation goes.”

At the end of the tour you’ll visit one of the trust’s schools. You’ll attend a lesson and play with the kids if they feel like it. This makes for some very enthusiastic scenes preventing even a hardened cynic like myself from remaining unmoved. With both fists firmly clenched I quickly blinked away a single mental tear. No one of course saw it. Real men only cry when Boromir dies in Lord of the Rings. Donate to these people. Make it a lot. www.salaambaalaktrust.com 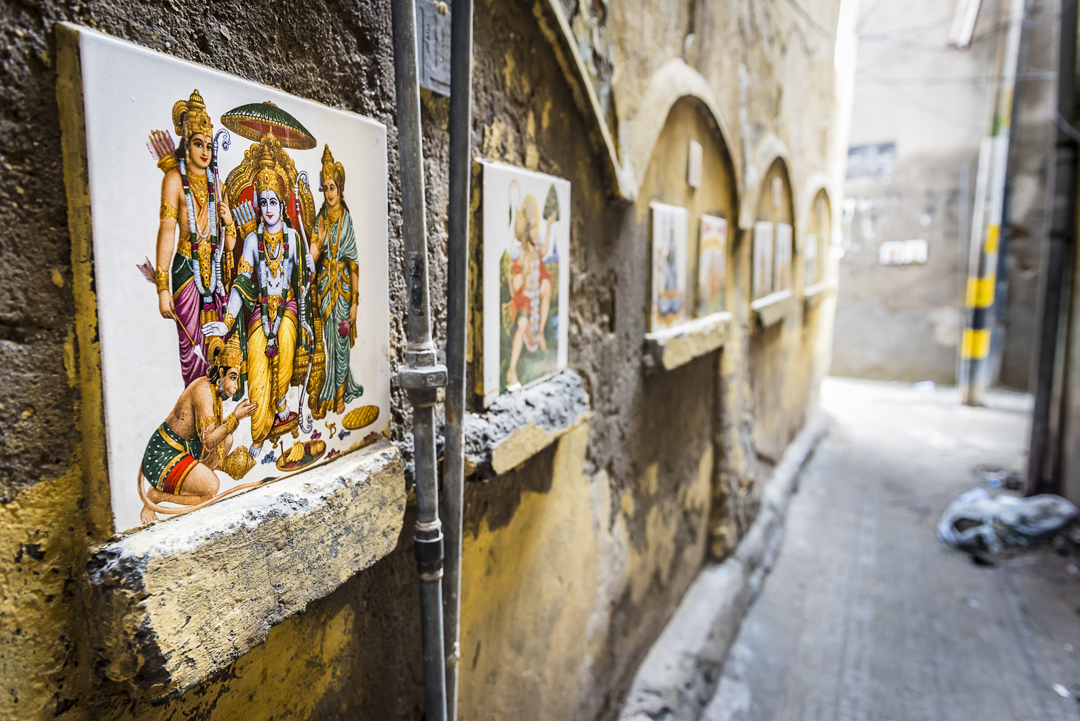 2. Smyle Inn: look at New Delhi from a higher perspective 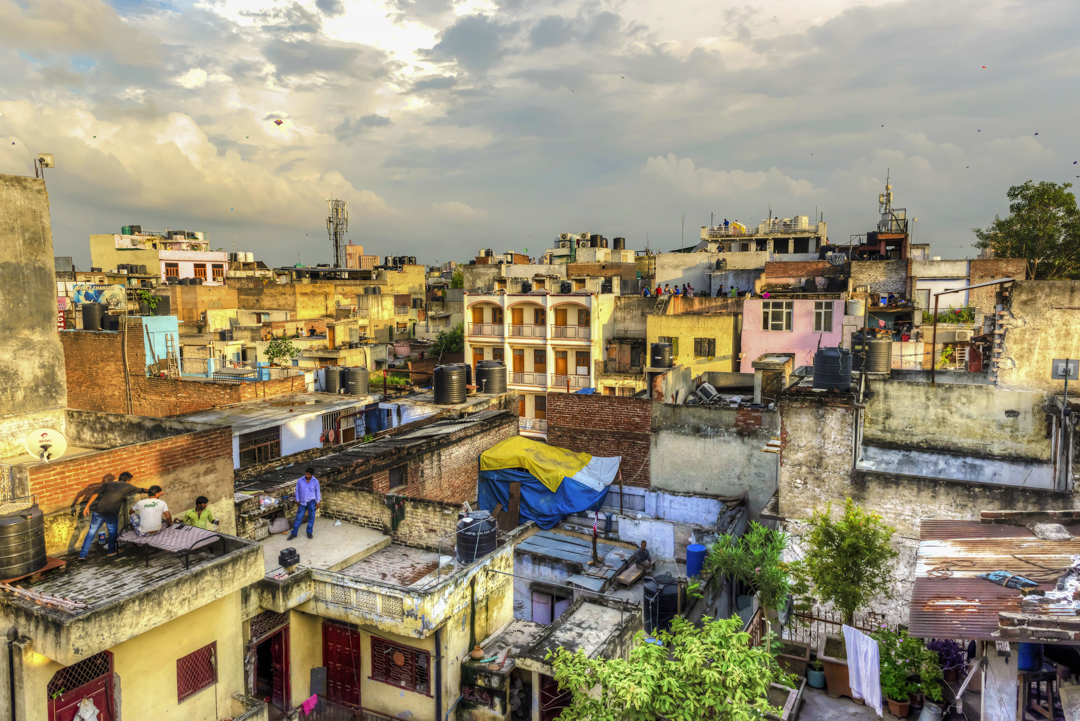 Sightseeing in Delhi can prove to be a fairly exhausting undertaking. It is ridiculously hot, and so humid your underwear immediately vacuums itself into your butt crack. Take five steps outside and you’ll have pit stains wet enough to scrub the kitchen floor with. In addition, almost everyone on the street wants to haggle with you and the roads are absolute chaos. Honking is the national sport after cricket, everybody drives as if they have nine lives, and if there are cows sitting on an intersection – and there are a lot of those roaming around – nobody has the heart to chase them away.

“Sightseeing in New Delhi can prove to be a fairly exhausting undertaking. It’s ridiculously hot and humid. Take five steps outside and you’ll have pit stains wet enough to scrub the kitchen floor with.”

Hectic stuff indeed, and it can be difficult to escape. Unless of course, you leave the street as it is, and start looking for higher ground. The rooftop terrace of my Smyle Inn hostel turned out to be the perfect spot for this. Viewed from above, Delhi completely changes appearance. A lot of people seem to basically live on their roofs during the hottest months. Mattresses are laid out to spend the night outside, cards are played, beers are drunk and loads of kids fly their little kites – another national sport. In the evening you can see dozens of them duelling each other over the rooftops. This is quite relaxing to witness, and in the evening glow, far above the hustle of the road and the sewage stink, Delhi looks like a One Thousand and One Nights fairy-tale. Order a cold Kingfisher, put your feet up and let off some steam: you deserved it, you champ you.

3. De Lodi Garden: find some peace and quiet in the city centre 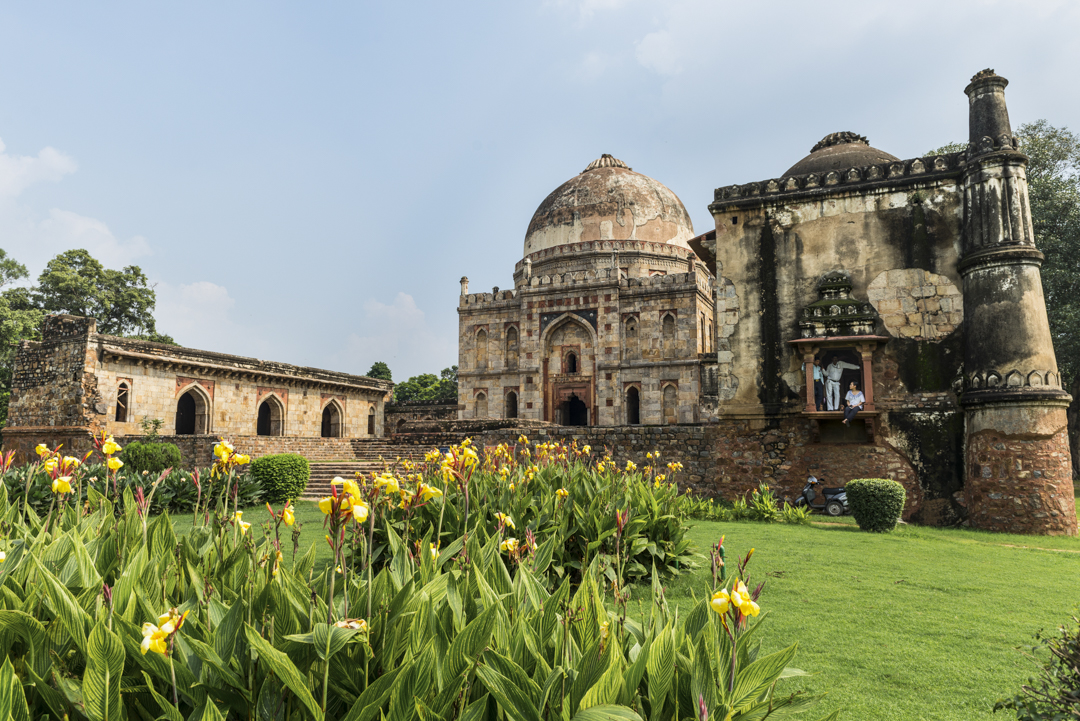 That rooftop sure is nice and cosy, but if you want to actually see anything you’ll eventually have to move outdoors again. Good news: there’s at least one place in New Delhi where you can go for a leisurely stroll, and still see an impressive list of historic sights while you’re at it. The Lodi Garden is my favourite spot in the entire city: a beautiful green park full of old royal tombs that could come straight out of The Jungle Book.

The only people you’ll see here are families on a picnic, joggers avoiding traffic and flirty, selfie-taking couples fiddling under each other’s sari in the shade of the trees. It’s the perfect spot to unwind. But if you’re a pale (but striking ^^) ginger like me, you might still have to pose for some pictures. I turned out to be a much-sought after centrepiece for Indian family portraits. My sweaty white mug probably still proudly compliments at least ten local living rooms. One of the pictures even has me holding a brand-new baby. It’s the toll of fame and fortune dear friends, and I for one am willing to pay it.

“The only people you’ll see in Lodi Garden are families on a picnic, joggers avoiding traffic and flirty, selfie-taking couples fiddling under each other’s sari in the shade of the trees.”

There you go: you now know exactly what to do in New Delhi. Have you been there already? What were your favourite places? Had some wild adventures there? Would you like me to be on your family picture as well? From Delhi and think I’m an uninformed idiot? Like to give me an online honking? Don’t hesitate and go crazy in the comments. Next time we’ll talk about a number of more well-known sights.

Want to discover some other Asian cities? Click here to read my stories on Taipei, Singapore and Hanoi. Looking for a destination in Belgium? There are plenty of weird things to do in Antwerp, Bruges, Koksijde, Liège and Charleroi as well.

I’d been writing this piece for some time when the current religious and political riots broke out in Delhi. Several people tragically lost their lives. I doubted whether I should still publish it, but I soon came to the conclusion that a number of assholes losing themselves in blind violence, is not a valid reason to cast aside an entire city full of hard-working people. These kind of horrible situations happened in Delhi before – after the murder of Indira Gandhi for example. This storm too will pass, people will salvage the pieces and day to day life will recommence. Delhi is still a fantastic city, and it will not change because of the crimes of an idiotic few. 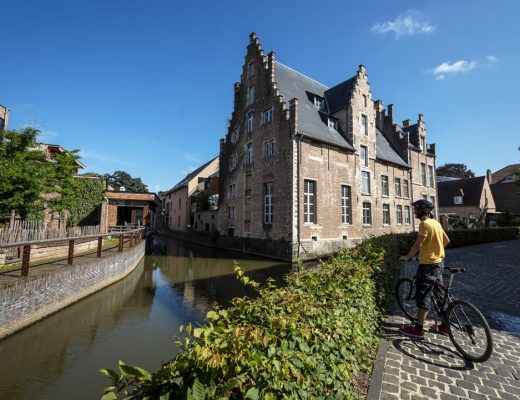 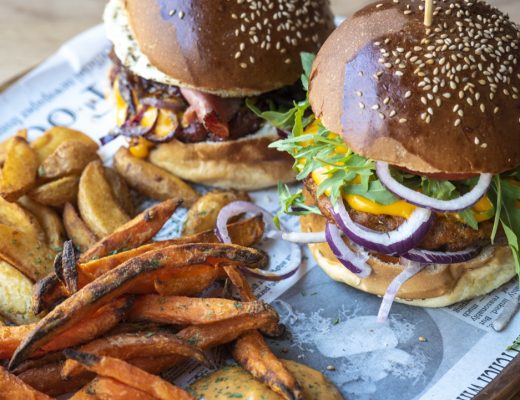 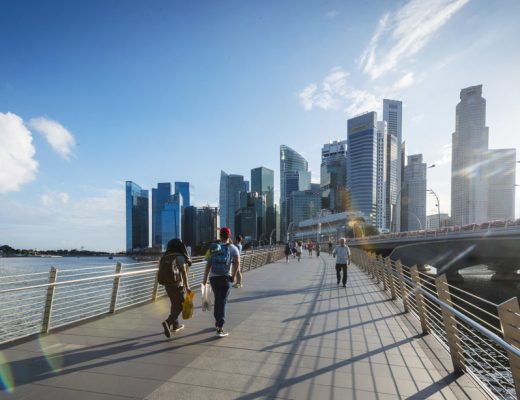