Cycling along the Elbe: from Meissen to Torgau on the Elberadweg

Cycling along the Elbe from Dresden to Dessau makes for some awesome stops. For miles you can follow the famous Elberadweg flanking the river through the countryside of Saxony and Saxony-Anhalt. Trot Op! put on its tightest pair of cycling shorts and took off to set a good example. 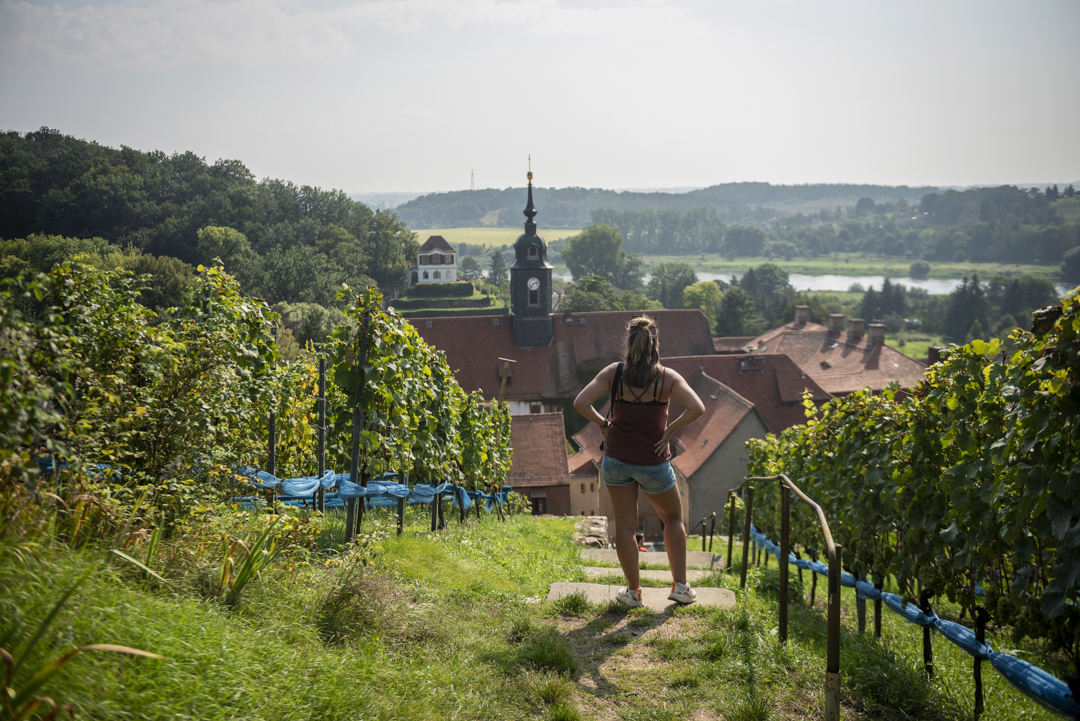 Why hello dear friends. I just took a look at my agenda, and guess what? Apparently it’s high time I started writing something on the second part of my Great German Adventure. After all, the main goal of my trip through East Germany was not a visit to Dresden – you can read all about that one here – but a bike ride along the Elbe that would lead us through the beautiful countryside of Saxony and Saxony-Anhalt. No less than two hundred and fifty kilometres to grind down. Seemed like quite the chore, were it not for the fact I got a brand new e-bike shoved under my lazy ass. One with four speeds and waterproof riding bags able to store half a household and (if needed) a medium-sized lapdog. On such a beast even the most rheumatic old crown of a grandmother will be able to climb Mont Ventoux – provided she manages to find the turbo button. In this light, a man of my physical calibre should easily be able to pedal peacefully along the banks of a lazy river. Especially knowing we had no less than five full days to successfully complete this odyssey. This allowed me to comfortably cruise through the German landscape without losing a single drop of sweat. Was kann das Leben verdammt schön sein, goddammit!

Cycling along the Elbe: from Meissen to Torgau on the Elberadweg

Those looking for a real adventure don’t have to stick to these 250 km at all. The so-called Elberadweg follows the river from the Czech mountains to Cuxhaven on the North Sea: more than 1.200 km of bike paths to enjoy on your trusty metal steed. That felt a bit much for us: from Dresden we went to Meissen, and then stopped in Riesa, Torgau, Lutherstadt-Wittenberg and finally Dessau. Unless you’re an avid Germany fan, these are probably not the most mindboggling names. Yet each of these towns (only Dessau can be called a somewhat larger city) has its own character and is more than worth a visit, especially if you can string together a number of them pedalling on your bike. Saxony – I’ll talk about Saxony-Anhalt later – is historically no unimportant region. It was one of the main electoral principalities of the Holy Roman Empire, played a crucial part in the Reformation and was one of the only German states to side with Napoleon. If you visit today, you will see a rural region full of green hills, vineyards and imposing castle fortresses towering over the landscape – not bad at all. Did I get you sufficiently excited? Then enjoy these six stops you shouldn’t miss while cycling along the Elbe.

1.  Meissen: get lost in the beautiful old town 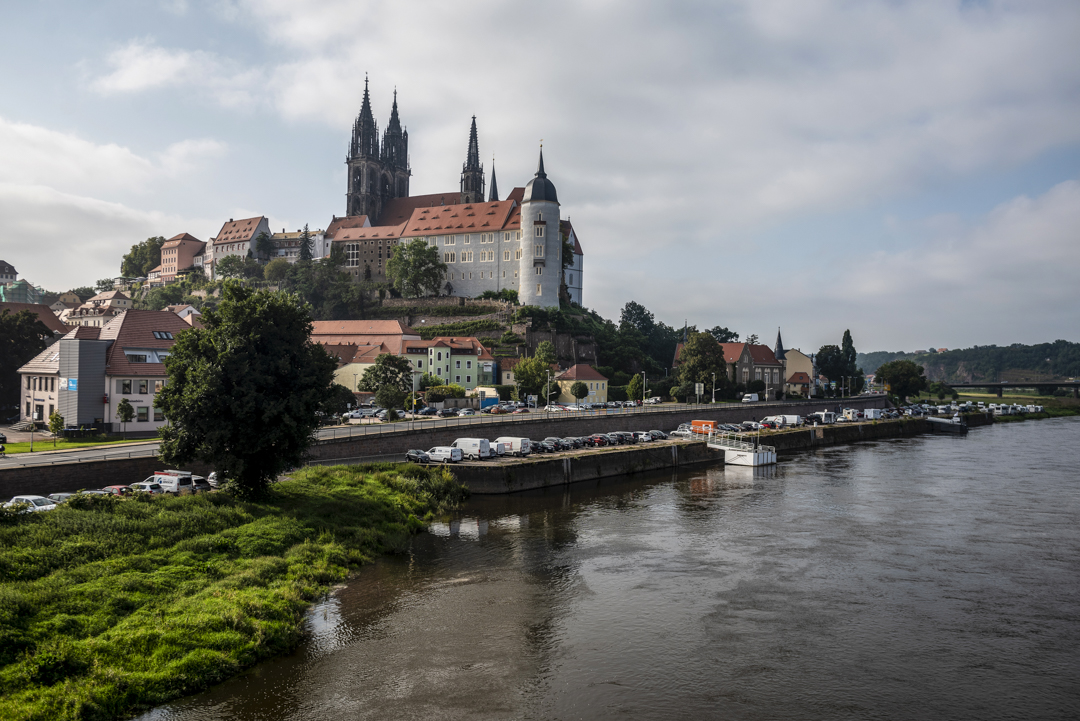 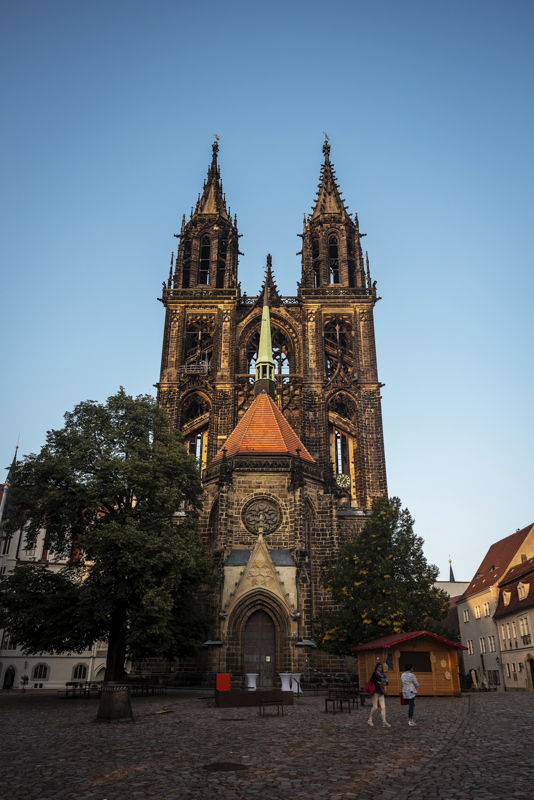 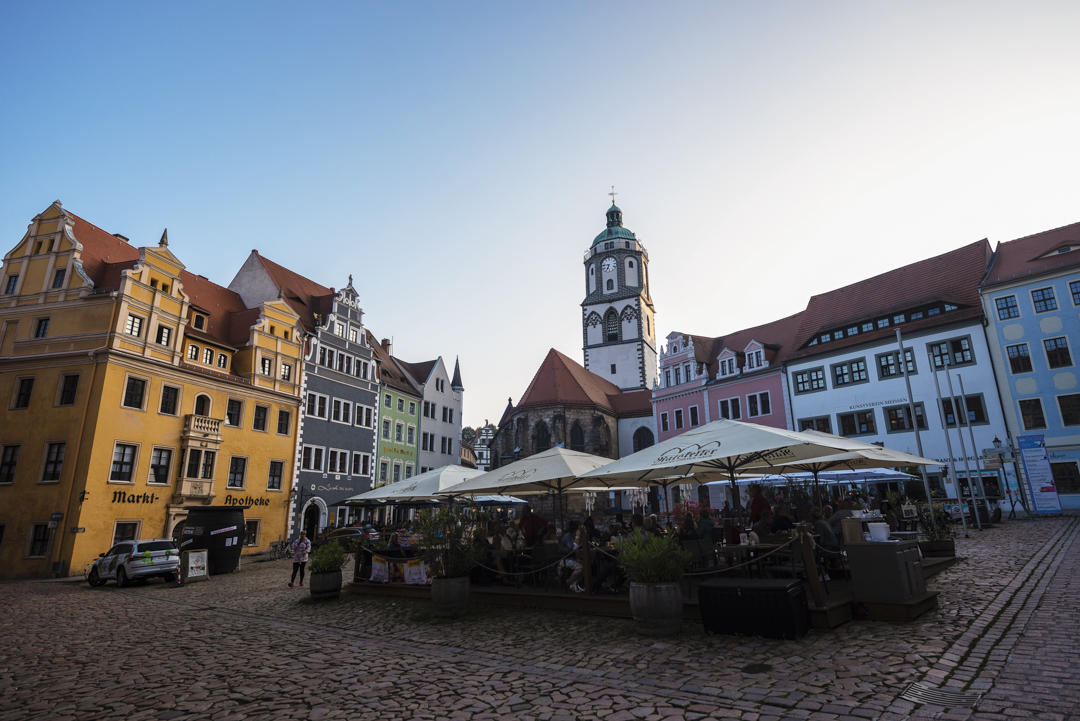 Meissen is only about thirty kilometres away from Dresden and is the first town of any acceptable size you will encounter on the Elberadweg. The centre is a colourful jumble of arty facades around a lively marketplace. From there, all kinds of alleys and stairways lead up to an impressive castle. This Albrechtsburg not only offers a beautiful view over the surrounding area, it’s also the place where porcelain was first invented in Europe. This happened in 1710. We will quietly disregard the fact the Chinese already produced porcelain while we were still wearing animal pelts in shit covered huts. Well done nonetheless, guys! Apart from this historical footnote, the new industry created a lot of wealth in the region. This was mainly because everyone suddenly no longer had to ride all the way to Beijing for a proper set of dishes. By the way, if you want to taste real traditional German food in Meissen, you should book a table in Domkeller next to the Albrechtsburg . From the terrace you can not only look out over the entire city, they’ll also serve you Sächsischer Biergulasch. It’s presented in a crispy brown bread, and you’ll even get a mug of beer from the oldest brewery in the region to go with it. Sounds like a sweet deal. www.domkeller-meissen.de

2.  Erlebniswelt Haus Meissen: learn all there is to know about porcelain 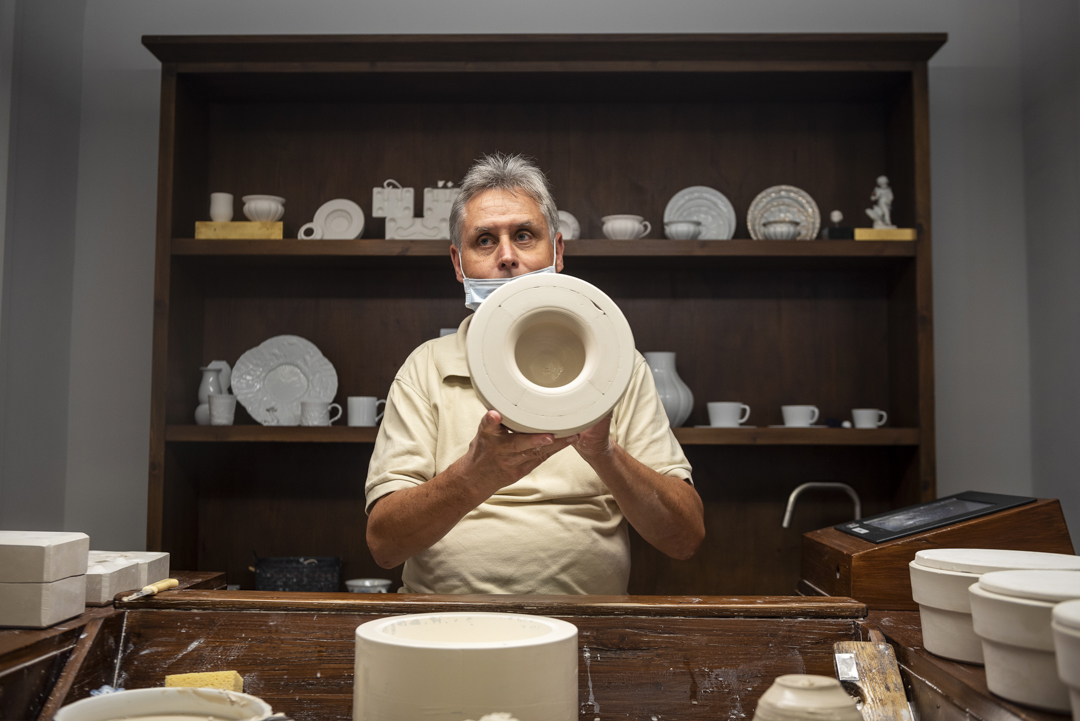 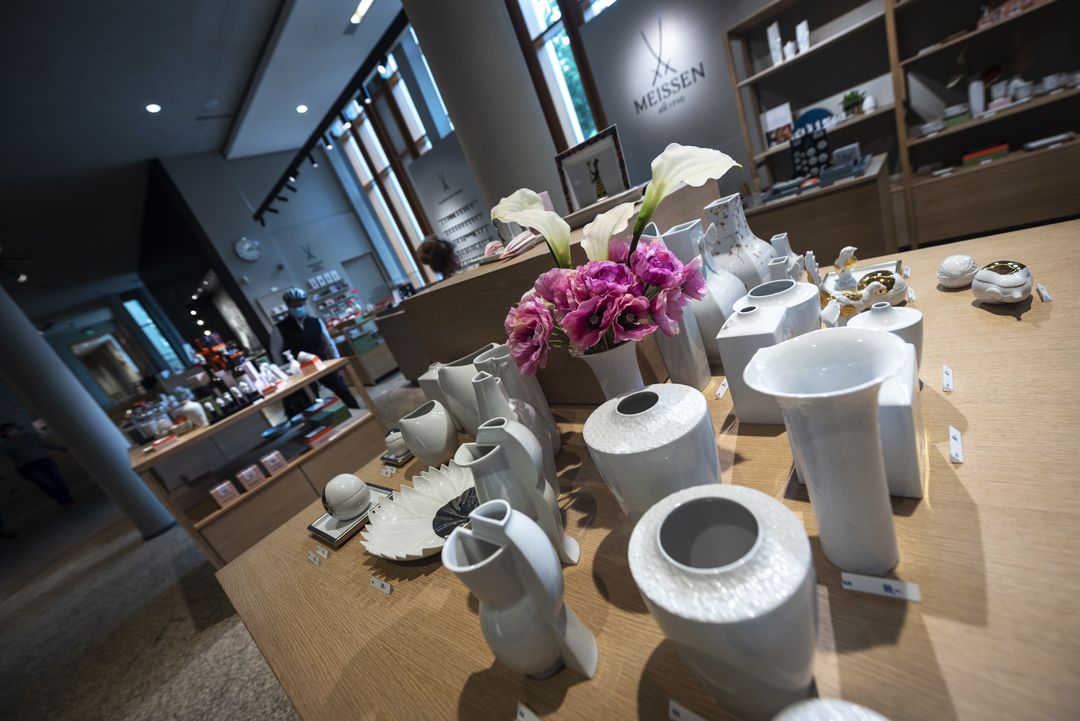 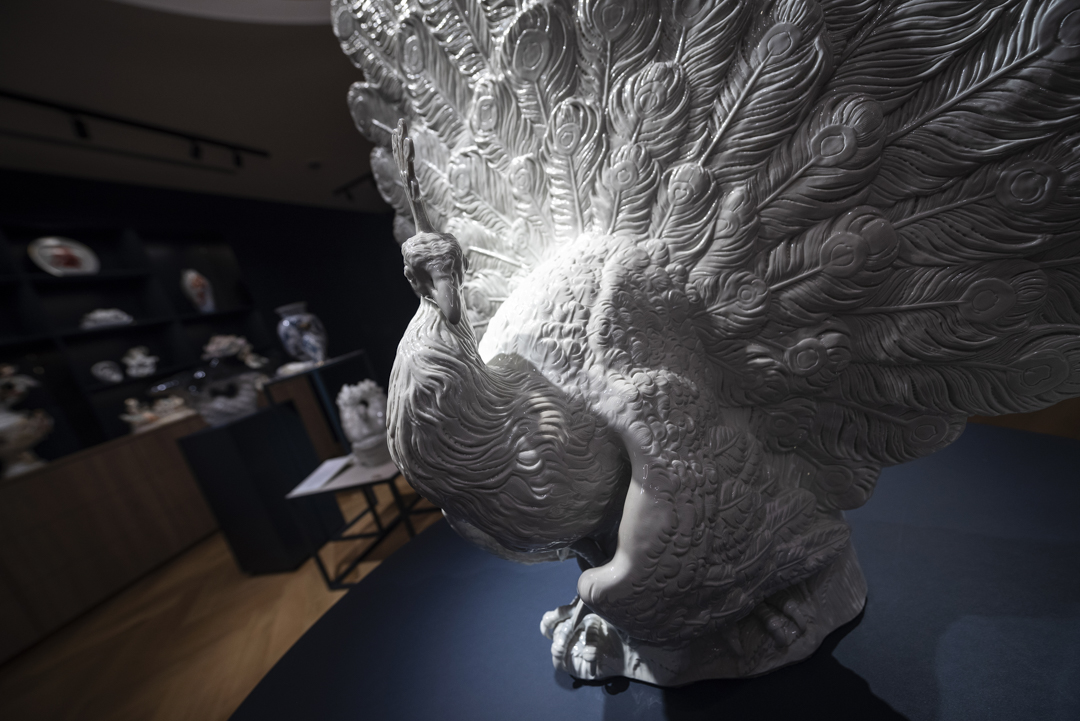 If you, like me, are crazy about porcelain (and who isn’t!?) you should visit Erlebniswelt Haus Meissen just outside the city centre. The world-famous (and very expensive) Meissen porcelain is still produced here. Anyone who bought a ticket first walks through a fancy showroom where all kinds of graceful and fragile porcelain creations are displayed completely unprotected. Lock your little brats in the toilet and carry your backpack on the front, because before you know you’ll send a figurine more expensive than a new BMW crashing to the floor. Exciting walk, especially for a klutz like me. Tours are available as well. They take you through various workshops, where extremely talented craftsmen perform extremely stressful precision work while the guide constantly bombards them with silly questions. One mistake and they can throw several days worth of work right in the trash – great entertainment for people who like subtle facial expressions. With Saxonia – top name for a career in certain entertainment circles – they also showcase the heaviest freestanding porcelain statue in the world. It’s shaped like a beautiful woman wearing a prom dress, and it weighs a whopping 800 kg. Maybe just a little too big for the living room, but for a mere 7.000 euros you can take a 35cm replica home. Pack it well: it’s a bumpy road. www.meissen.com 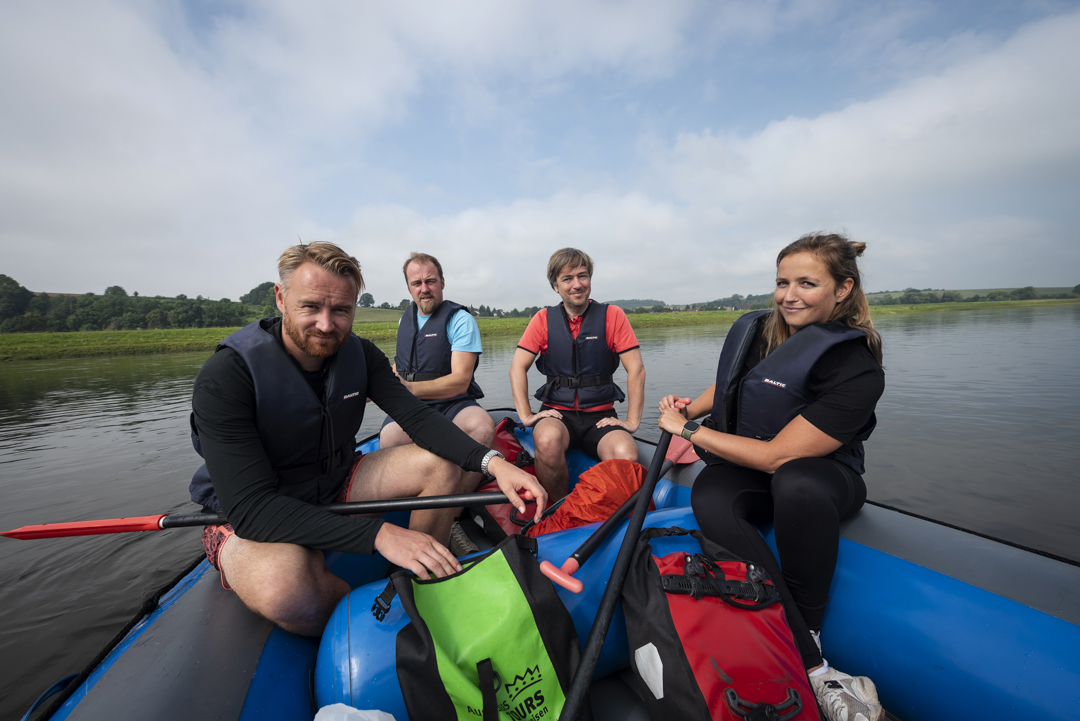 Does your tender little bottom suffer from a little saddle pain, or do you simply want to rest your legs a bit? No problemo capitano! Near the Meissen Beach Bar – don’t imagine too many palm trees – you can get out on the water of the Elbe yourself. This can be done individually or in pairs in a flashy kayak, but also with a whole group in a real inflatable raft. Don’t expect any raging rapids or rock formations: it’s still the Elbe. Here you’ll calmly float downstream while green banks glide by on both sides. Here and there you can stop to admire an old abbey or a flock of sheep, but otherwise you don’t have to do anything. In fact, you don’t even have to paddle – the current will take you where you want to go. As an intelligent and well-read man I quickly realized this, after which I dosed off into a wonderful daydream. This however, was not to the liking of my fellow rafters – including the illustrious Ben Roelants. I had to endure countless looks and comments on my supposed laziness – completely unjustified – when in reality, we were not moving forward any faster or slower with or without paddling. The injustice suffered still hurts my eternal soul. Work smarter, not harder! www.reisen-meissen.de 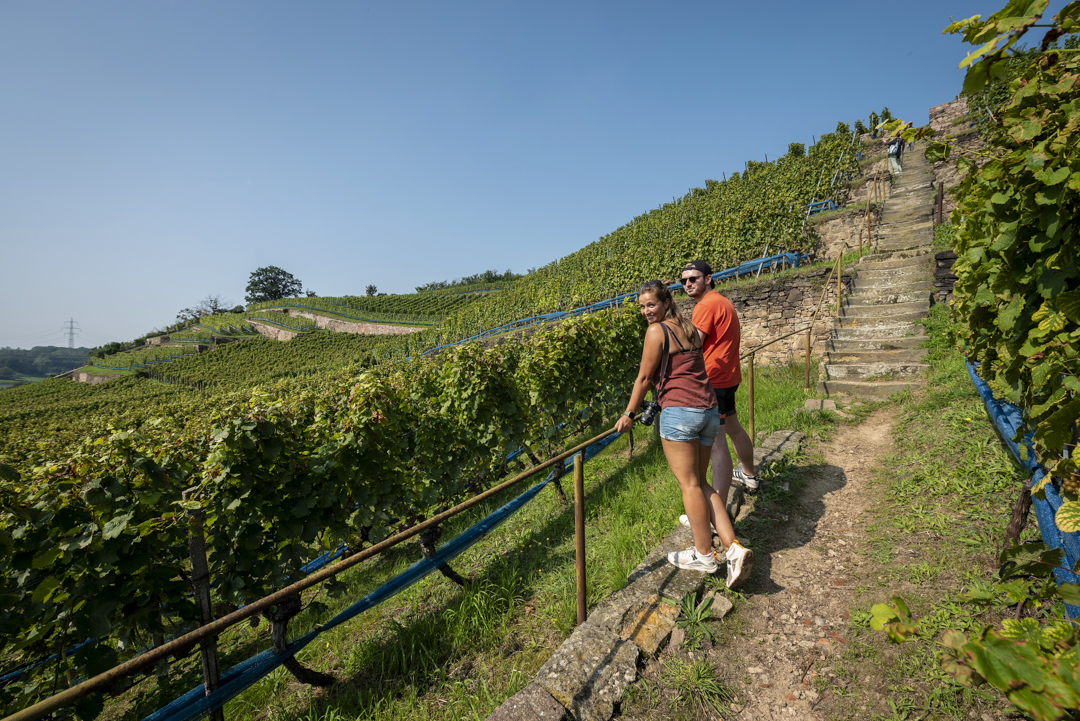 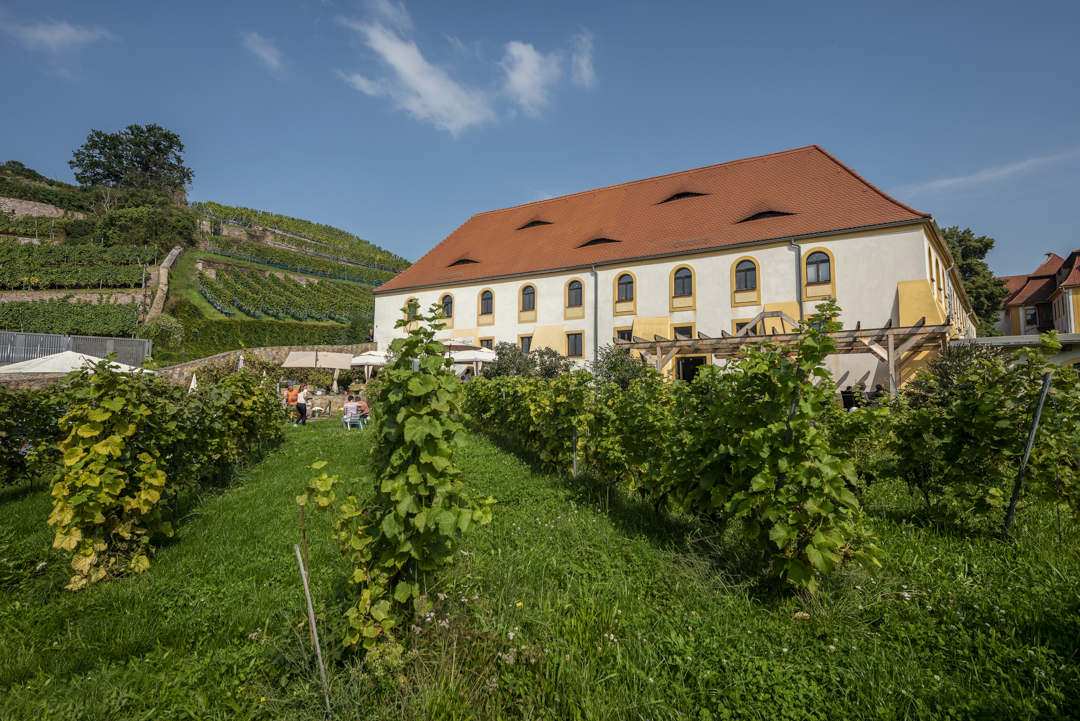 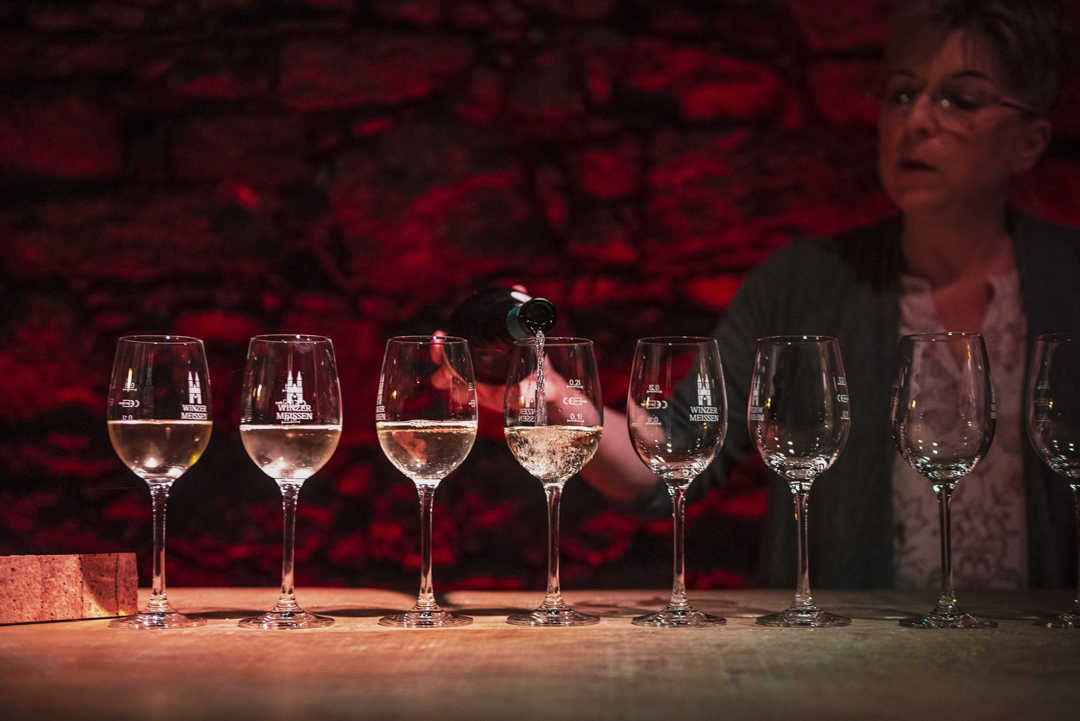 Every time I set foot on German soil, I notice it: as a wine country, Germany is completely underestimated – especially when compared to the vinegar they sometimes pour into your glass on the other side of the Maginot Line (keep it quiet). Saxony produces a lot of wine as well. We stopped twice for an extensive tasting. In the suburbs of Meissen you’ll find the Sächsische Winzergenossenschaft: not the most picturesque winery (it is located in the middle of a residential area), but they do have an attractive cellar and a wide selection of top wines. Ride half an hour further and you’ll arrive at Weinreich Seusslitz. This is a superbly photogenic place, where you can enjoy a top restaurant in a renovated country house, in a beautiful garden next to a small castle and an little old church. If you walk up the stairs next to the house, you can look over the vineyards all the way to the glittering Elbe. Magical place to get your bearings. www.winzer-meissen.de  www.elbweinevents.de 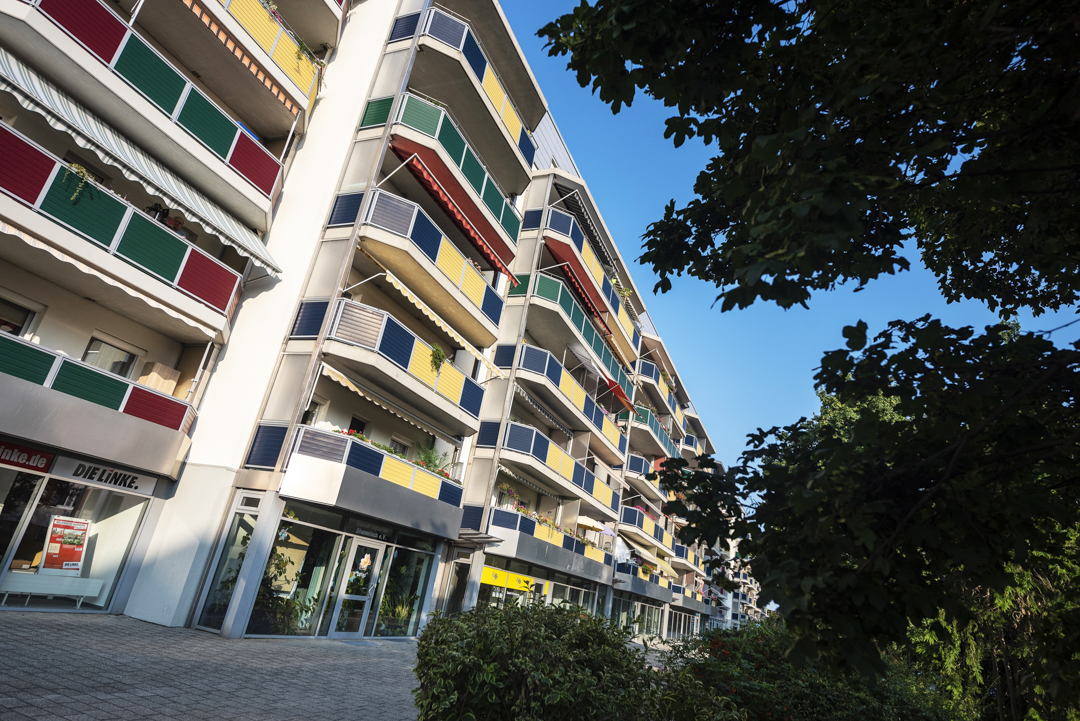 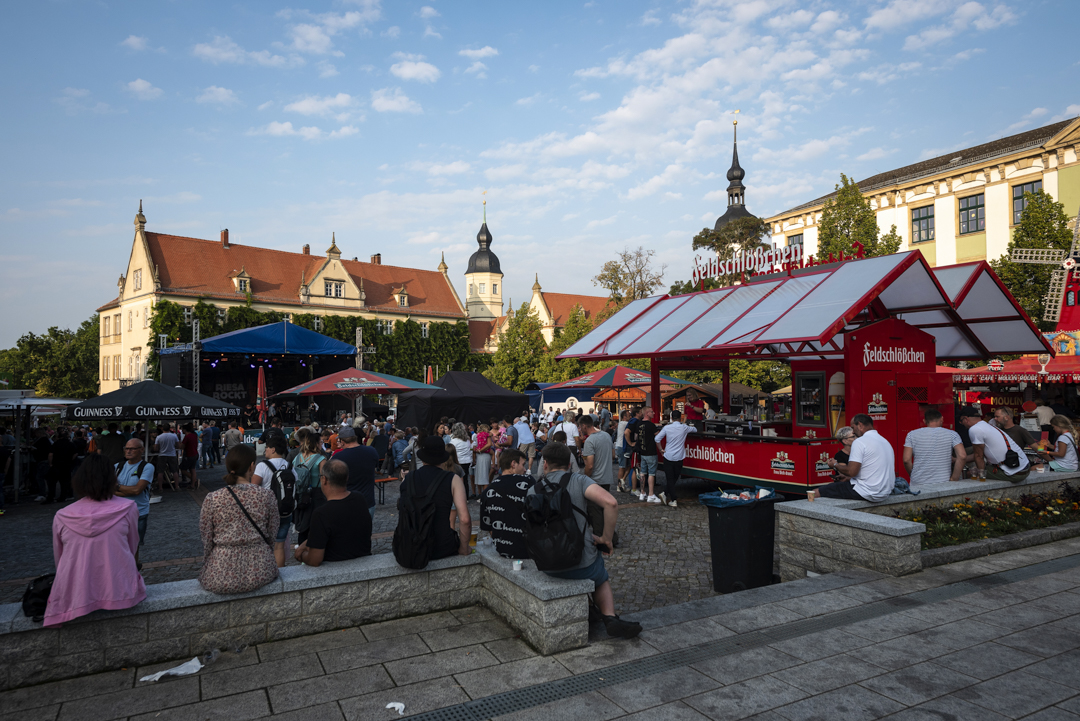 Riesa is the only town on our route you won’t find any trace of in your Lonely Planet. It’s a moderate sized industrial city with a beautiful classic market square and some pretty little parks, but most of it is completely residential – hardly any tourism here. The only hotspot recommended to me by Tripadvisor was the Nudelmuseum. This is a small museum next to an active pasta factory where you can “learn everything about how pasta conquered Riesa”. Being twelve years old mentally, this seemed like an absolutely hilarious visit, but unfortunately Sunday was their only closing day. I had no other choice but to buy some cotton candy and enjoy the local fair. What you can see here, almost everywhere, are the so-called WBS 70 apartment blocks that were built all over East Germany in the GDR days. Inside, they were completely identical all over the country. Not very exciting architecturally, but on the other hand nobody ever had to ask where the toilet was on a house warming visit. The glass is always half full. www.teigwaren-riesa.de 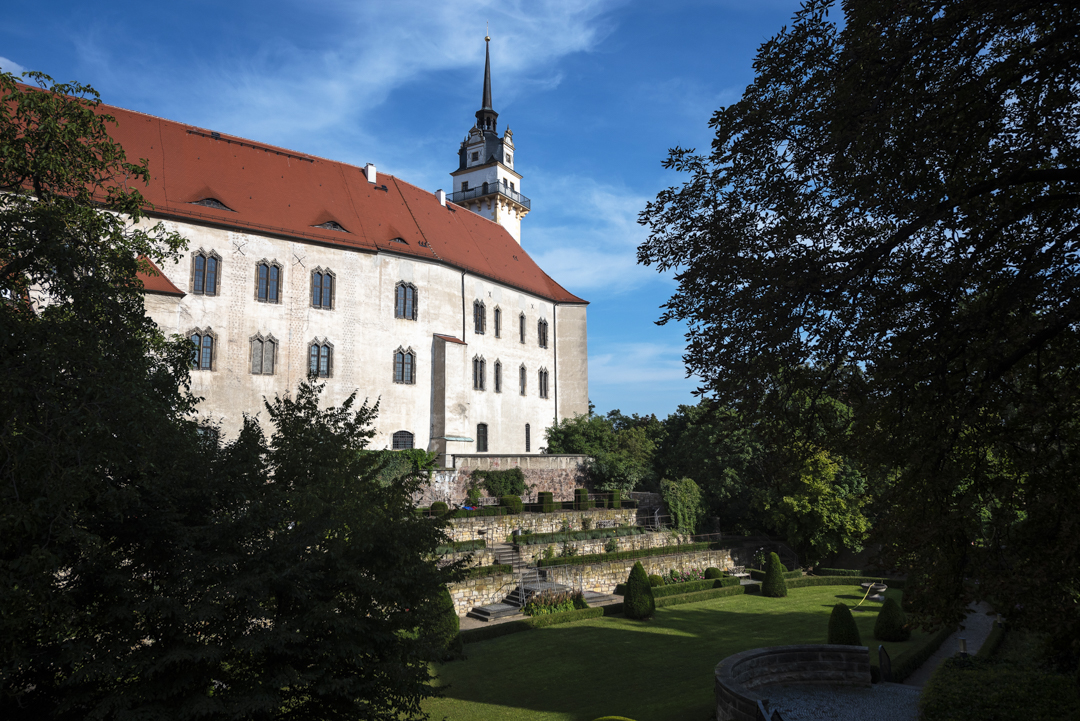 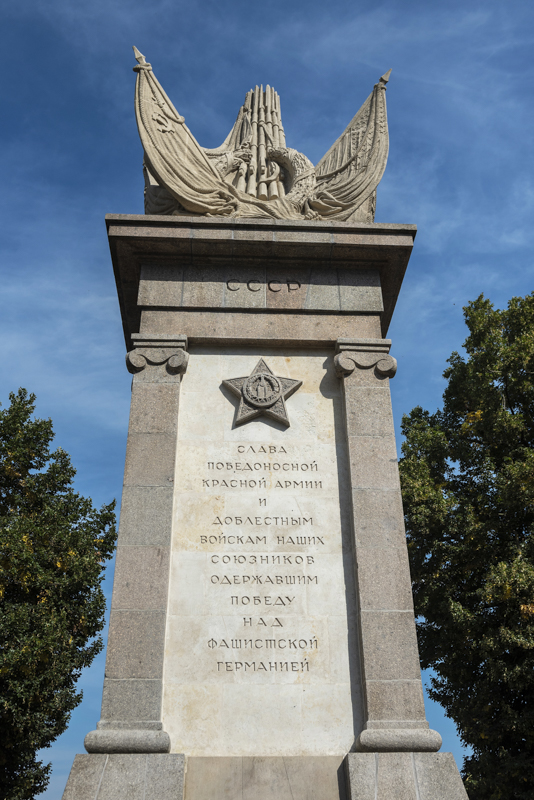 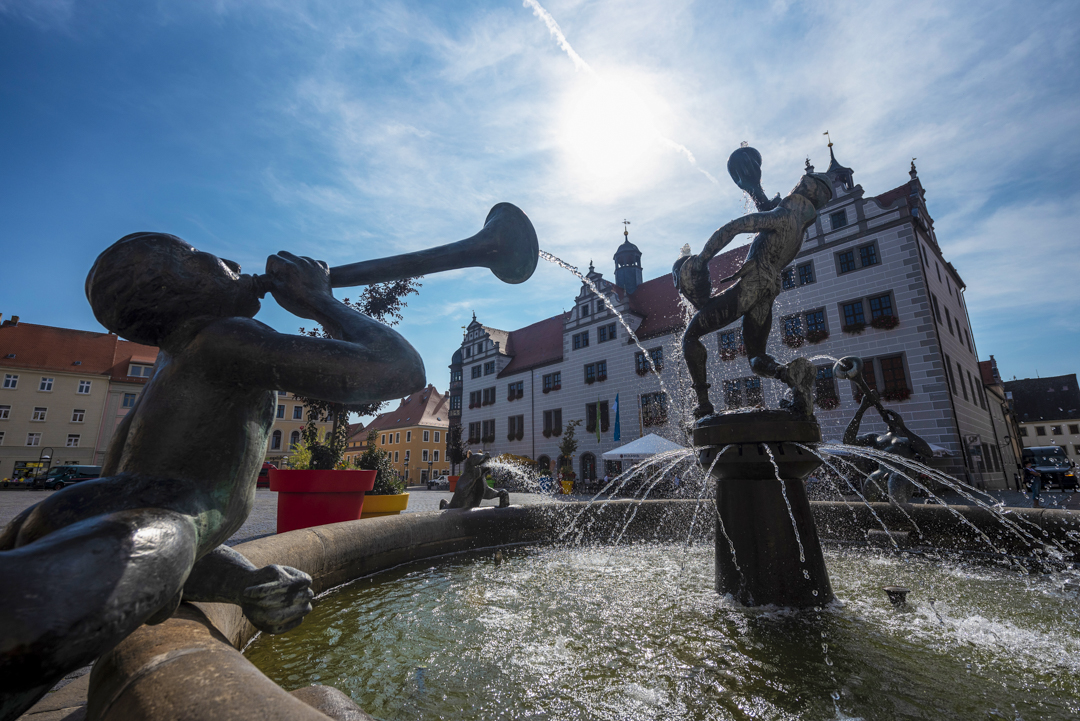 Torgau is a beautiful historic town and played a crucial part during the Reformation. The name also recurs in more recent world history. Torgau is where US and Soviet soldiers were able to shake hands for the first time during WWII. It very nearly went very wrong though. When the Soviets gathered across the Elbe, an American patrol had already moved into the city. Apart from a number of abandoned prisoners of war, they didn’t find a single soul. To avoid misunderstandings, they quickly pieced together an American flag using some bedding and a jar of finger paint from the local Aldi store (poetic freedom activated). However, the red army thought this shitty flag looked pretty suspicious, and decided to open fire in fear of an ambush. Only after a Russian prisoner was able to shout the necessary curses towards the other side (“Cyka blyat! Cyka blyat!”) did things calm down enough for everyone to start fraternizing. The famous handshake picture was staged for the press a day later. Two monuments commemorate this occasion. One was put down by the Soviets after the facts and also acknowledges the efforts of the Americans; a second was unveiled much later in the GDR period and shows how the German population received the Russians with open arms. Reality was, as often, a little less romantic.

Fietsen along the Elbe: hotels in Saxony and practical information 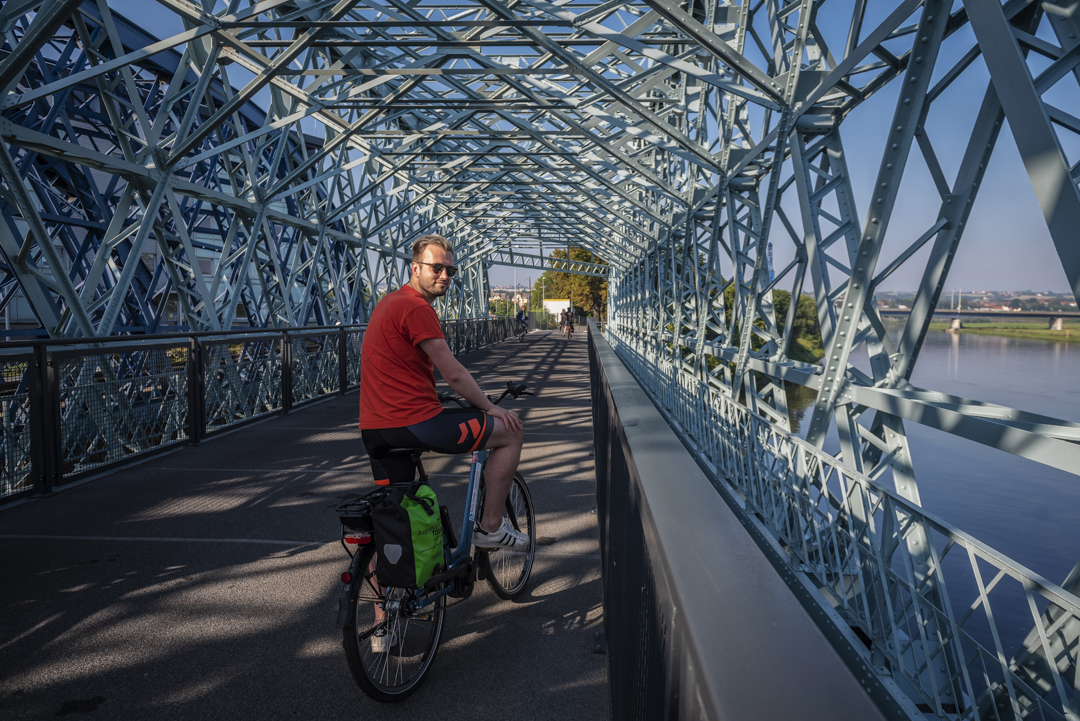 This was the second part of my story about East Germany. In my last blog post on the trip, we will pick up the thread of our journey in Torgau by talking about the town itself and its role in Martin Luther’s life. Then, in nearby Saxony-Anhalt, we’ll explore the rest of the Reformation story and the rise of the Bauhaus movement in Dessau.

For more information on Germany as a destination, surf to: www.germany.travel

For all information on the Elberadweg and the things you can see along the way, surf to: www.elbe-cycle-route.com.

If you want to know everything about Saxony, you should visit www.saxonytourism.com.

The trip was organized by www.joker.be

You can read the article by my colleagues from Travelrebel here.

In Meissen we stayed in the beautiful Dorint Parkhotel Meissen: www.dorint.com

In Torgau we booked the Goldener Anker Hotel: www.goldener-anker-torgau.de