Deinze might not be topping the list of touristic hotspots in Belgium, but it’s a surprisingly varied destination with a couple of unique stops on offer. Trot Op! went for a visit in cooperation with Lys Valley Tourism and returned with the following six tips for a weekend in Deinze. 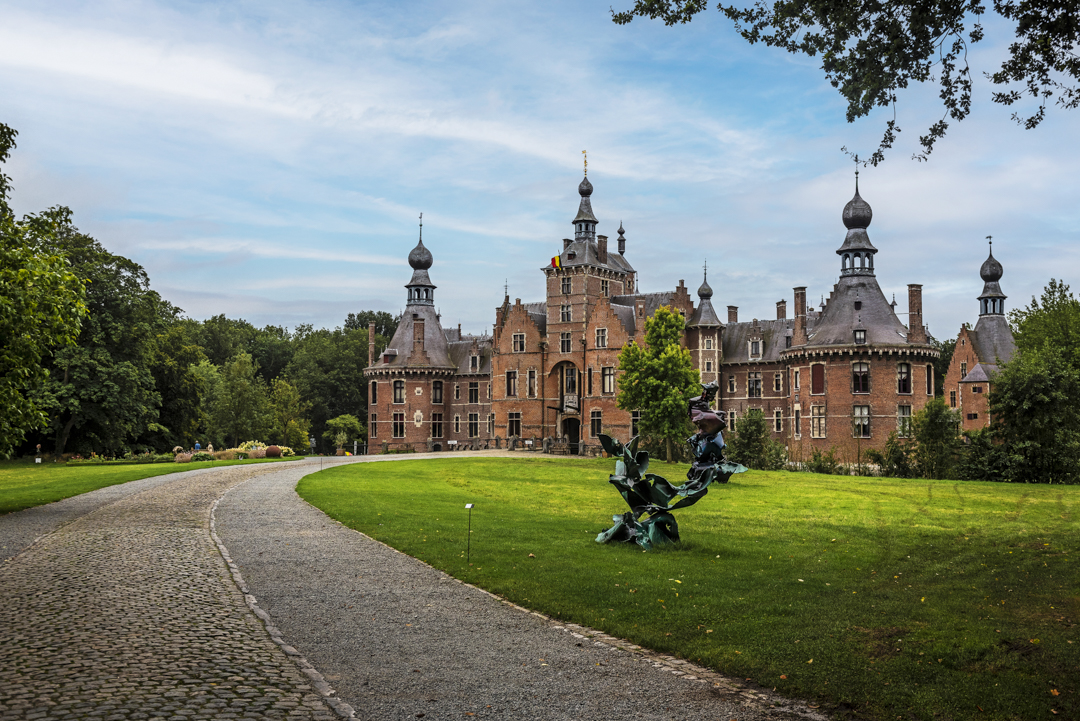 “Hey baby, wanna grab the kids and book a weekend in Deinze?” The odds of this phrase ever being unsarcastically uttered in all of human history, seemed about as likely to me as the odds of walking the One Ring to Mordor (where the shadows lie) on my next press trip. Not very. When the lovely people at Lys Valley Tourism suggested me to combine my city trips to Kortrijk and Roeselare (more on those later) with an extra one to Deinze, I had some reservations at first. Is there actually anything to do in Deinze? Do they ever see tourists there? Would the local forest dwellers come and feel my strange and wondrous beard, like in one of those hidden Chinese villagers when the first ever foreigner walks in? Where the f*ck even ìs Deinze? Pertinent questions, but none that would keep me away.  No, like a true adventurer I set my gaze on the horizon, ready to plunge straight into the deep, dark unknown. Off to Deinze it is. It might just be alright.

“Is there actually anything to do in Deinze? Do they ever see tourists there? Would the local forest dwellers come and feel my strange and wondrous beard, like in one of those hidden Chinese villagers when the first ever foreigner walks in? Where the f*ck ìs Deinze even?”

Allow me to start by answering one of my own questions. Deinze can be found pretty close to Ghent, and is the second largest city in East Flanders in terms of surface area. This not only means they have plenty of space to screw around with, but also that there’s quite a bit of nature to enjoy in between. This makes Deinze an excellent starting point for exploring the entire Lys valley by bicycle. The city centre itself is not one of the country’s most beautiful – no lies on this blog – but that doesn’t mean there is nothing to do or see. Deinze has some hip shops, unique restaurants and one of the most romantic castles in Belgium. Who would have ever thought that? Well, me of course. Otherwise I’d have stayed home. 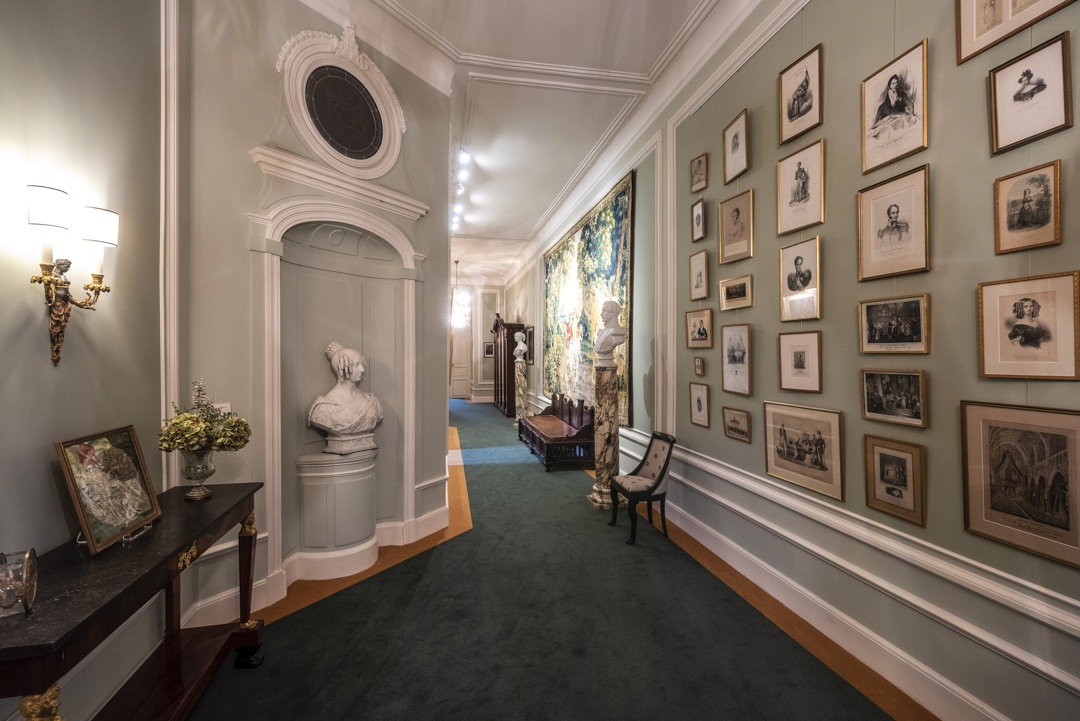 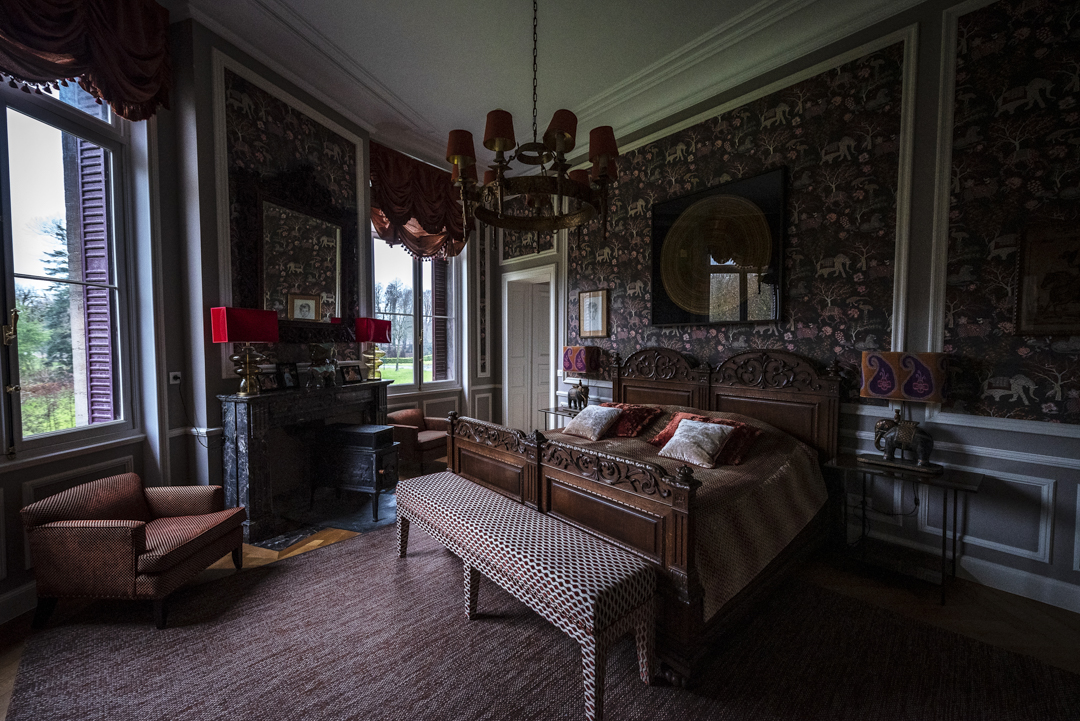 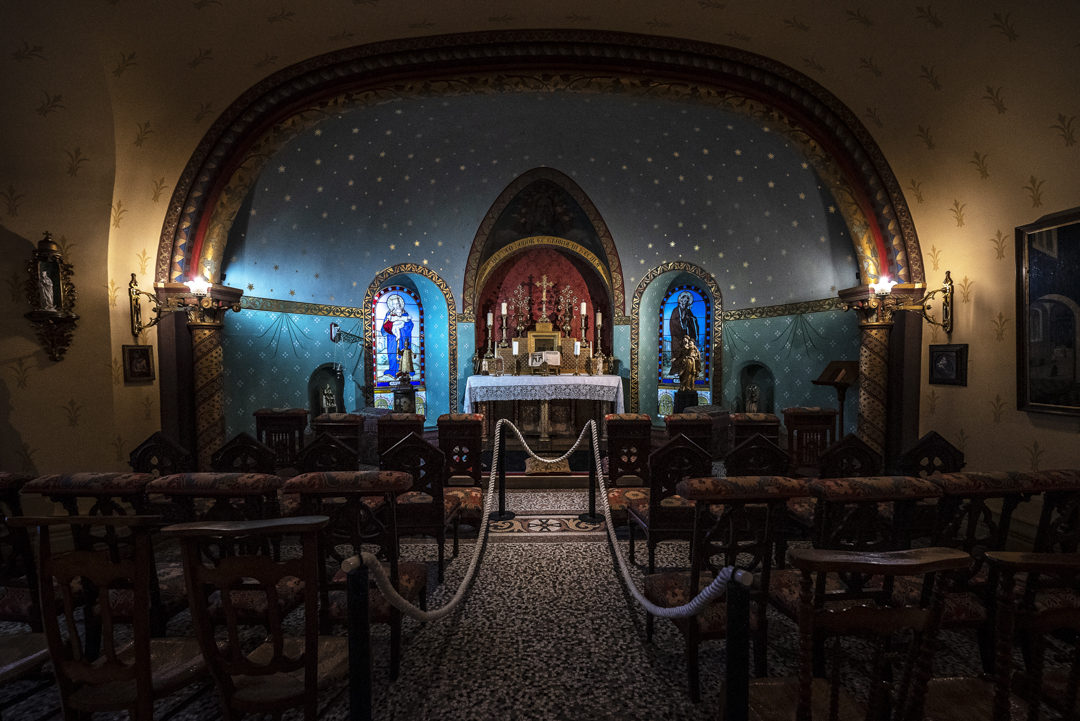 *See cover image above for a look at the entire castle

The most beautiful place in Deinze is located a few kilometres outside the city in a vast park of almost fifty hectares. Ooidonk Castle is owned by Count t’Kint de Roodenbeke, who still resides here himself – not in the main building but in one of the two towers across the courtyard. Dating back to the sixteenth century, the castle is one of the more extravagantly decorated in the country. You can book a guided tour here at set times, which will lead you past luxurious salons, sleeping quarters and dining rooms full of art and antiques from all over the world. King Philippe of Belgium and the Count were schoolmates, and today he is – as the many photos of them together confirm – still a friend of the family. As from last year, you can spend the night here just like him, because the Count has put four beautiful rooms for rent on Airbnb. Always wanted to sleep in a fairy tale castle, pretend you’re Snow white and start a whistling medley with some of the local birds? Well here’s your chance. The reviews are (what did you expect: it’s a castle) extremely positive, and when Count Henri is present, he will happily give you a personal tour. www.ooidonk.be 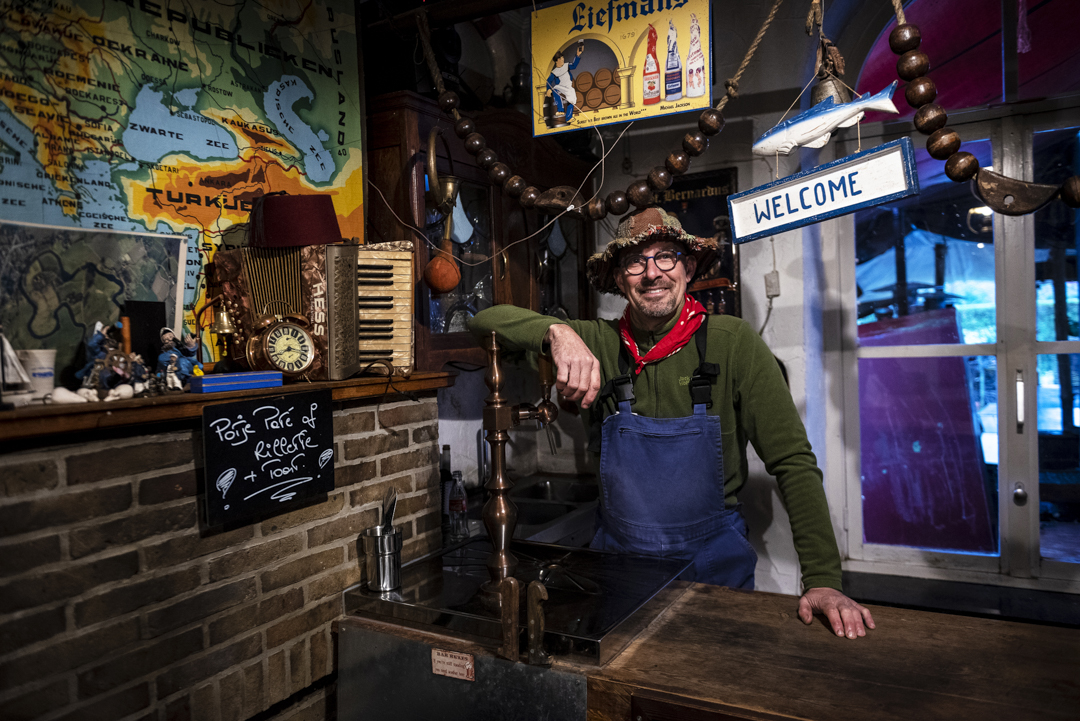 Slightly less luxurious but just as cosy is ‘t Oud Sashuis, which is located next to the Astene lock. In the past many barges passed here, and they were not pulled by horses (because a horse costs money) but by wiry old ladies with some sort of leash around their shoulders. This is both tragic and absolutely hilarious, but it’s mostly just very hard work. And the fact that the Lys River took a sharp bend here didn’t make things any easier. To spare Aunt May’s dear old back, it was decided to straighten the river and install a sluice to accommodate the water drop. This lock was continuously served by two families living in the nearby building.

“’t Oud Sashuis was transformed into an old timey bar where you can warm up next to a real Leuven stove and get some stone-baked bread topped with local pate.”

Today, only the occasional leisure boat uses this passage, so the lock is now looked after by a few on-call volunteers. In the meantime, ‘t Oud Sashuis was transformed into an old timey bar where you can warm up next to a real Leuven stove and get some stone-baked bread topped with local pate. The place is kept open by Wim Dierickx: an interesting guy always wearing his farmer’s overalls. ‘t Sashuis is located right along the cycling junction route and has a lot of local micro beers on offer. A small museum full of photos and memories of inland shipping (including photos of the grannies dragging the ships) is hidden upstairs, and there is a covered terrace outside with a couple of friendly goats walking about. We are indeed in the Flemish countryside. www.astene-sas.be 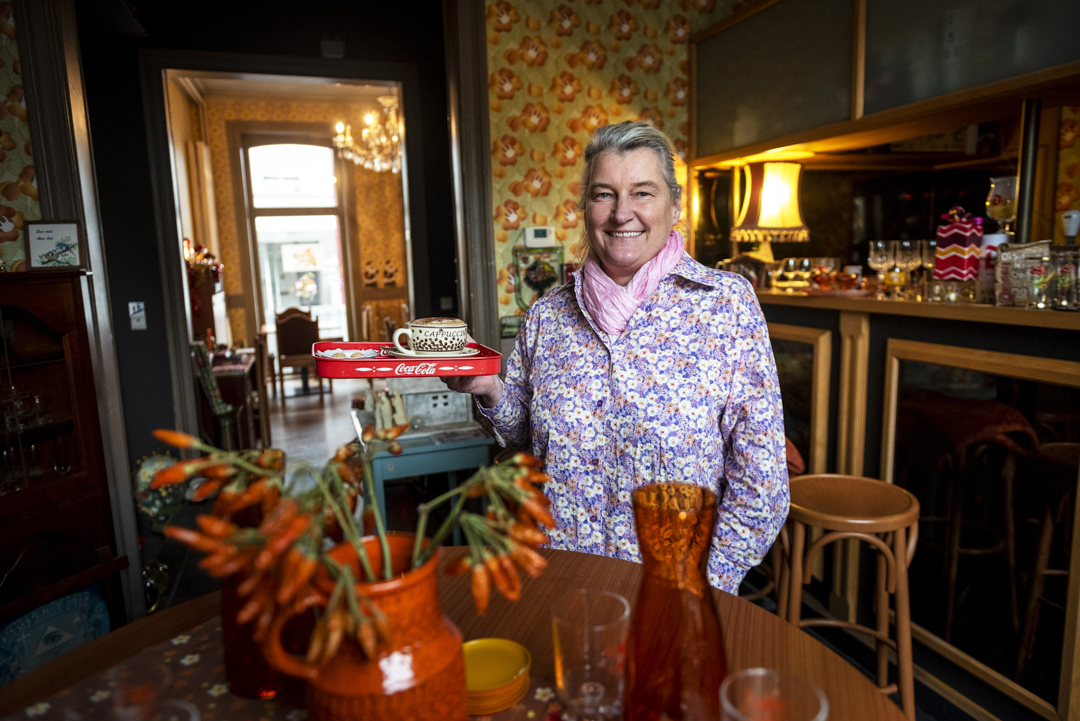 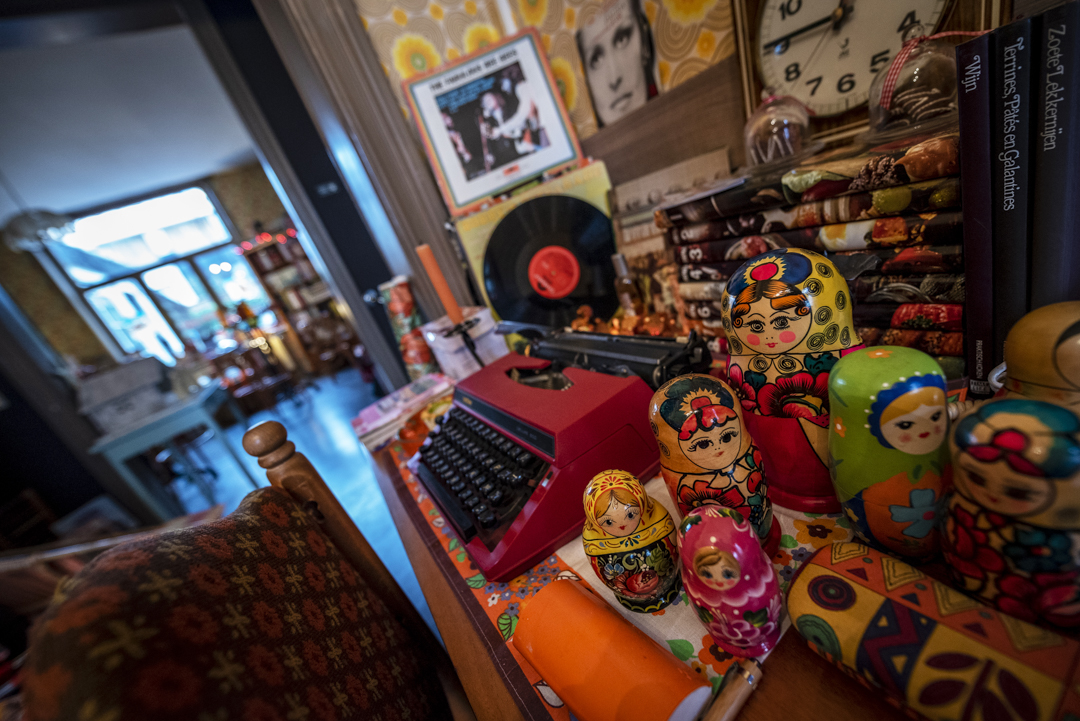 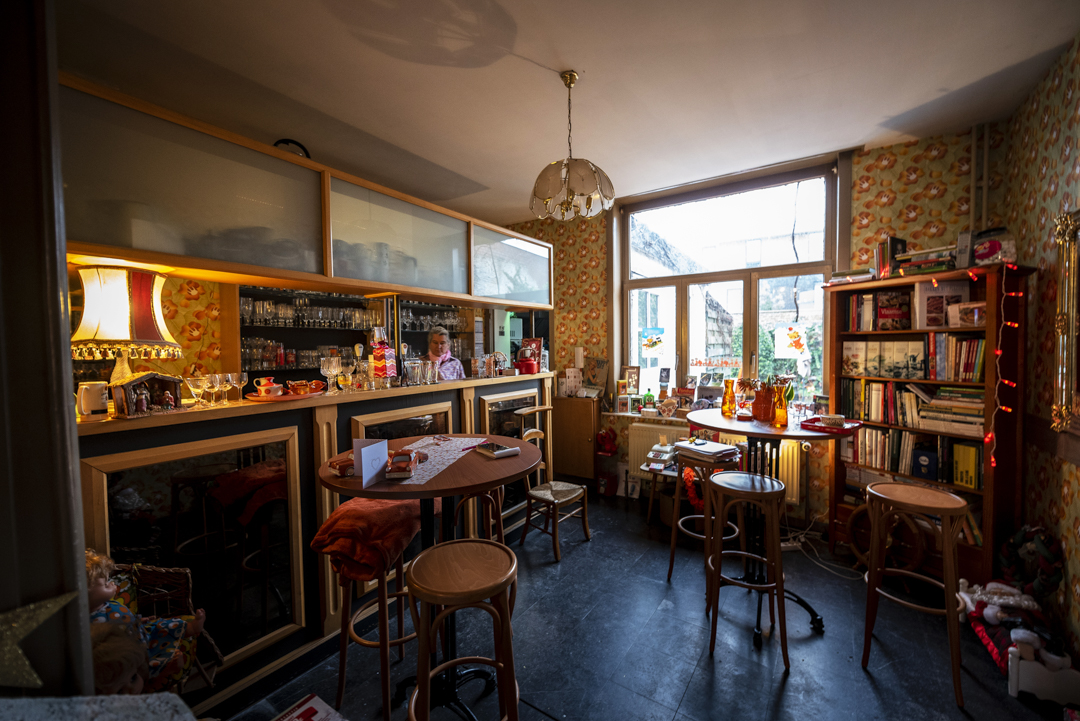 Speaking of old ladies: loved having dinner at your granny’s, but did the poor old thing die about twenty years ago? Head to the most unique and possibly cosiest restaurant in Deinze instead. In Gigi’s Retro Kitchen you step into the seventies as if they never ended. Everything here was decorated as if Austin Powers and the Golden Girls joined forces. Brightly coloured chairs and psychedelic wallpaper alternate with cupboards full of old books, vinyl and grandma’s tableware. Nostalgic homeliness with a touch of flair. On the top floor, a pile of classic toys is laid out. Visiting children can choose something from it to play with, so that the people who actually paid for their own dinner can finish it in peace. The menu is straight from the seventies as well. Traditional dishes like ox tongue in Madeira sauce, steak tartare and vol-au-vent are served with a fresh sense of creativity. Lovely place for an honest meal, and only a few minutes’ walk from the shopping area. www.gigisretrokitchen.be 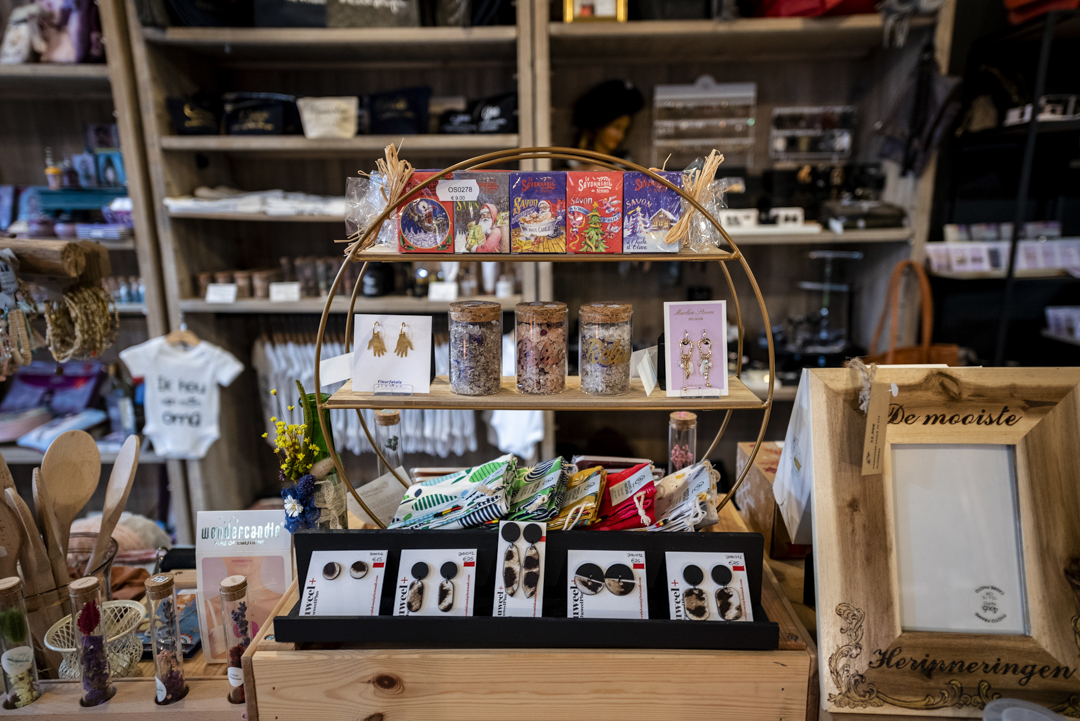 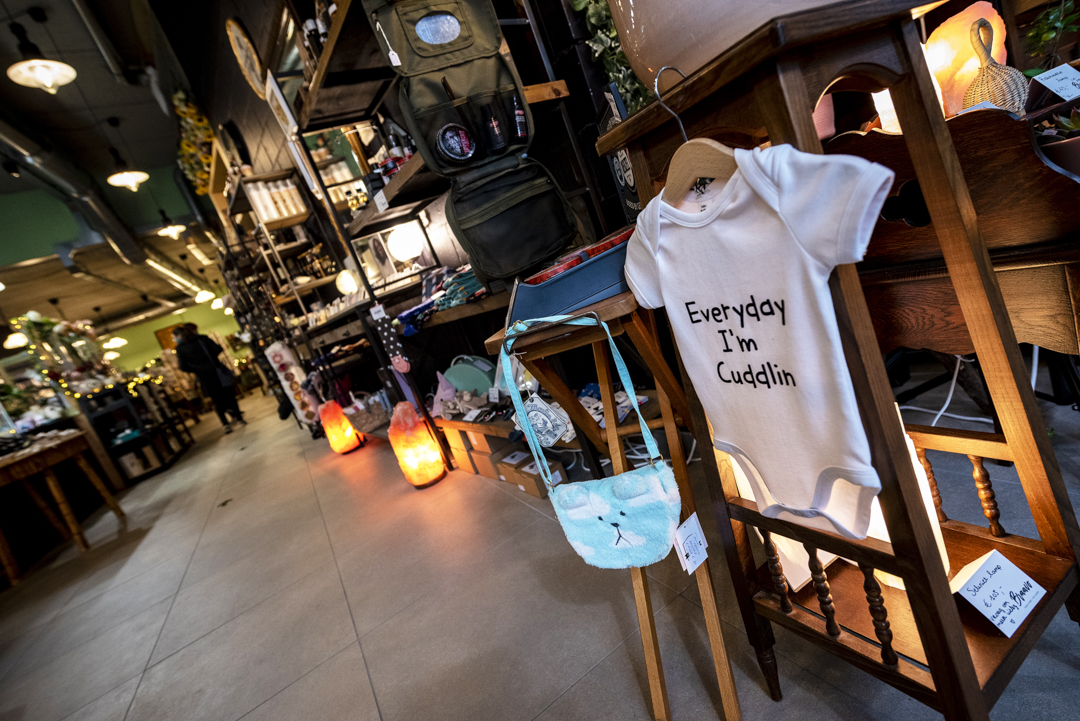 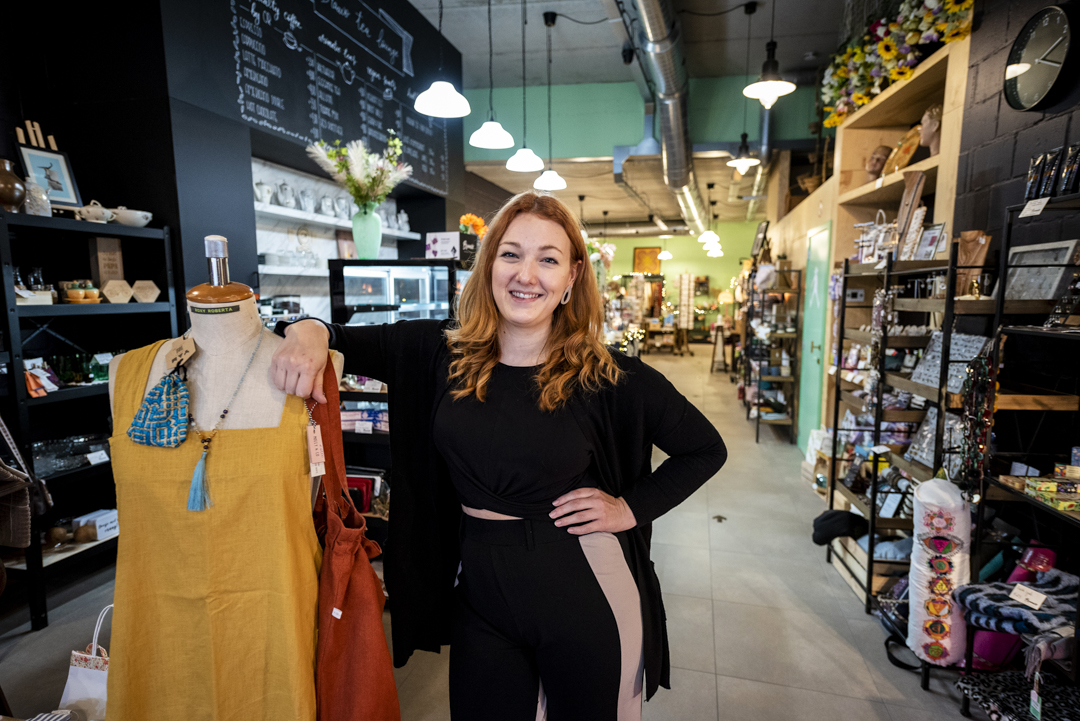 Deinze may never win the prize for Flanders’ hippest shopping destination, but one particular business can’t be blamed for this. Braavo Trendstore is run by 27-year-old Janis and houses thirty different local entrepreneurs who offer their stuff for sale here. Each rack is basically a stand-alone shop. It goes without saying a lot of handmade items are sold here. These range from clothing and toys to natural care products, household items, cool plants and all sorts of other random gadgets. This makes Braavo Trendstore the ideal stop for people who want to buy a number of unique Christmas gifts in one go without having to walk through half the city for them. Anyone who buys something here immediately knows that behind every product is a real person with his/her own small company. This in stark contrast to what’s behind most big businesses: small kids in huge hangars working the skin of their hands sewing everything together for you. Merry Christmas. If you need something to warm up with after this small sidenote, you’ll be happy to know you can get a cup of coffee and some pastry here as well, to be enjoyed in a seat of your choice. www.braavo.be

5.  Crealief: creative workshops in a cowshed 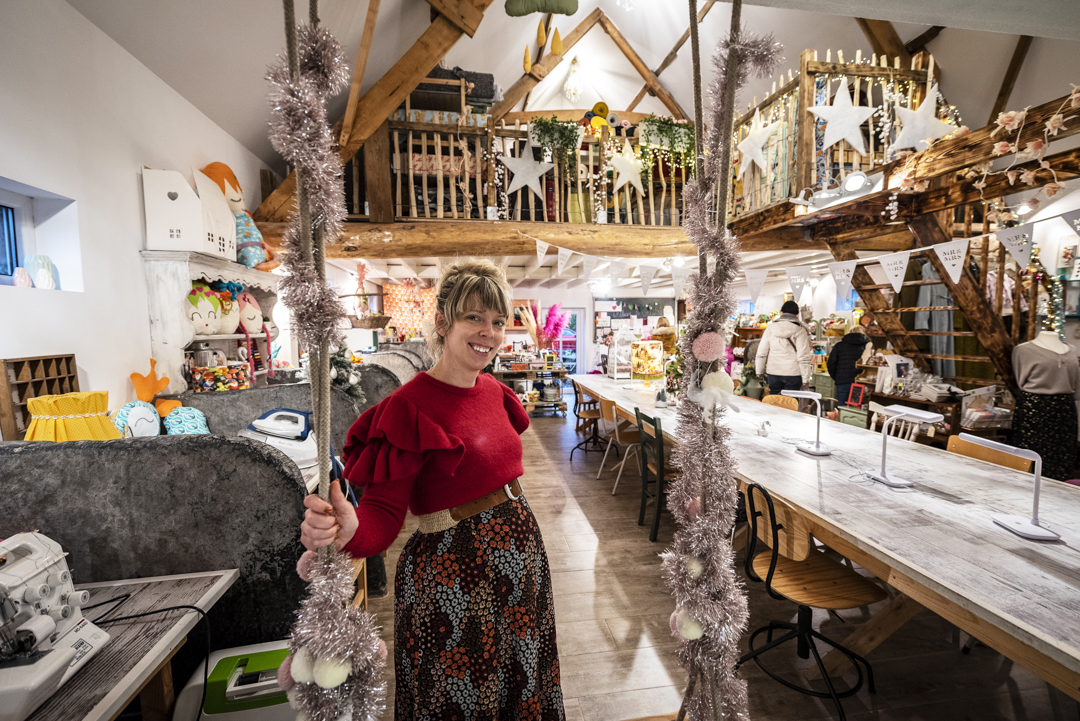 To once again outline that we are in the Flanders countryside: the next business is located in an old cowshed just outside Deinze – be it in a very nicely renovated one. Crealief is the brainchild of Lieselot Denys and a space for creative workshops that both you and your offspring can enjoy. You can take sewing classes here, learn how to make natural beauty products, and there are even classes for dads to learn how to braid their daughter’s hair. The workshops take place at one long wooden table, and along the walls the stone partitions that used to keep the cows apart were repurposed as temporary corona screens. In the old hayloft you’ll also find an extensive fabric shop: perfect for people who want to take their creativity home. Crealief is a great place for children to let off some steam, especially because it’s also a bit of a farm still. There are plenty of animals outside to play with during the breaks. www.crealief.be

6.  Mudel: a museum with extra chickens 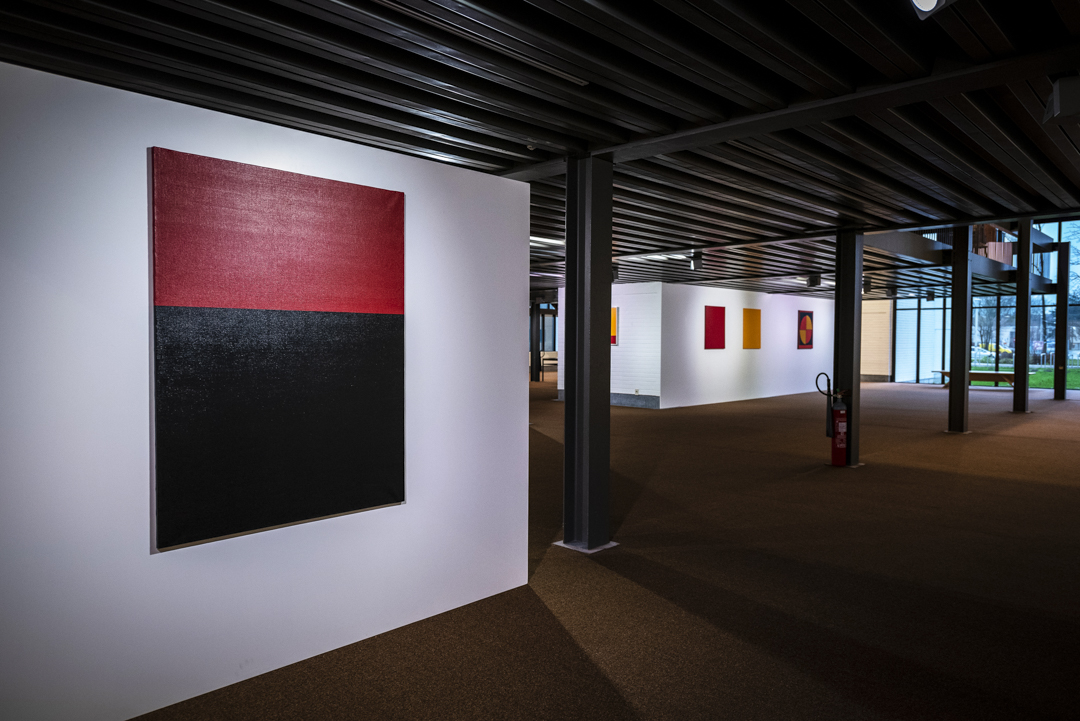 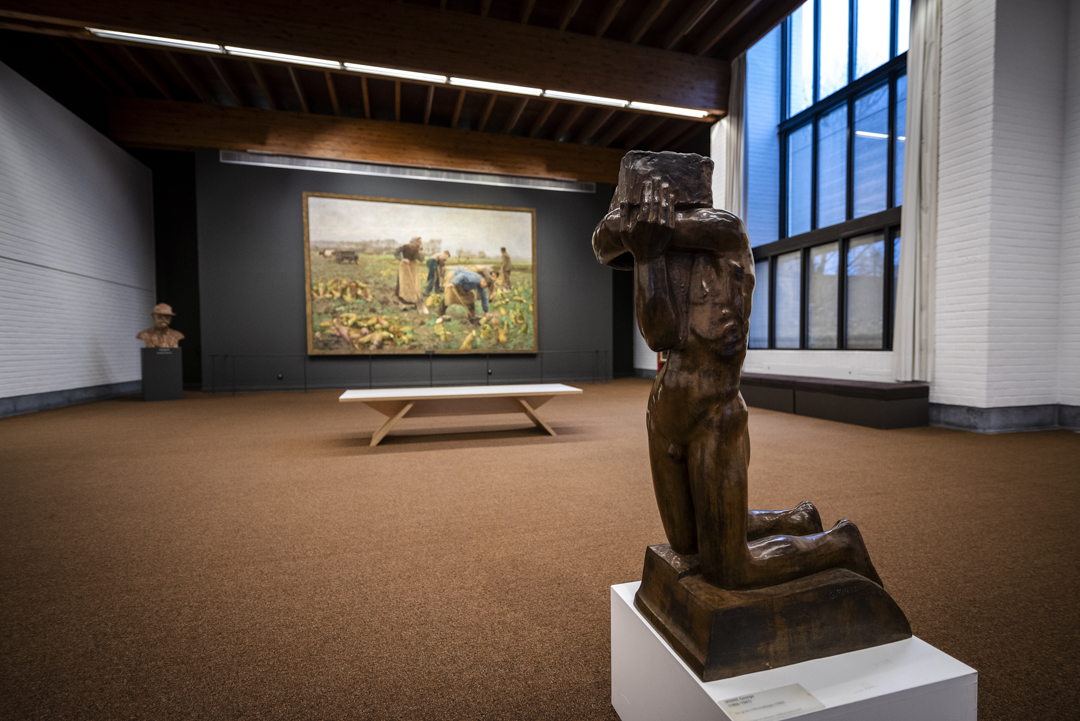 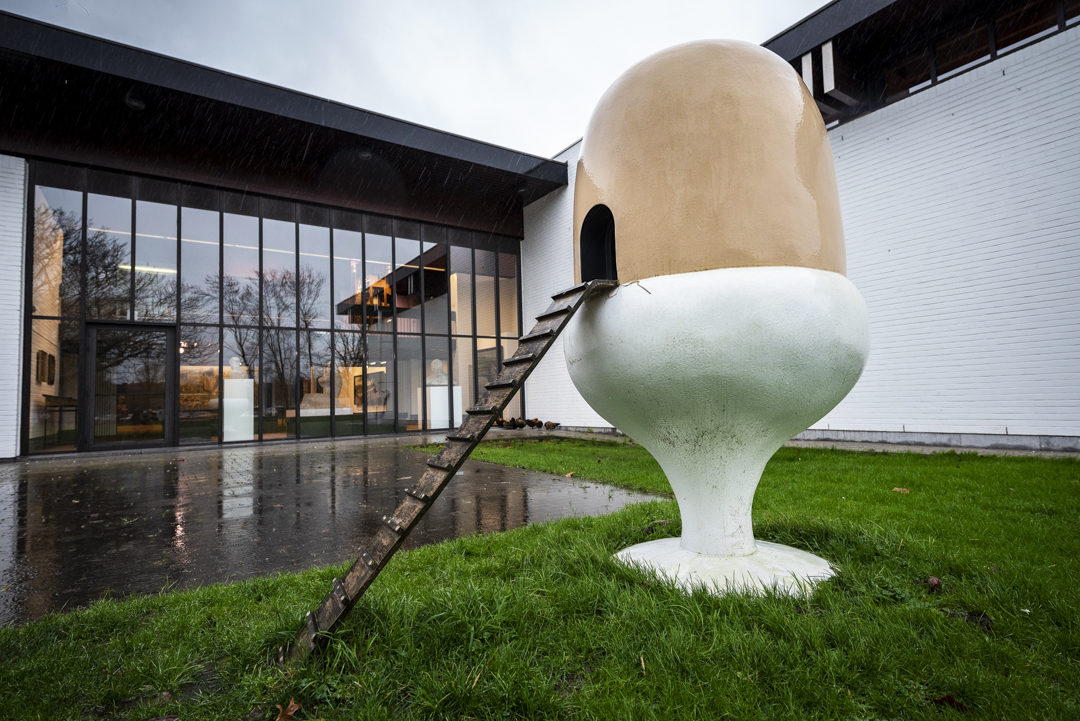 Mudel (or: “The Museum of Deinze and the Lys Valley”) is a large white building to be found on a lawn in the centre of Deinze. Here, artists from the region are showcased together with the city’s history. On the ground floor you’ll mainly find paintings by people such as Constant Permeke, Gustave Van De Woestijne and Roger Raveel (none of which you will know as a non-Belgian). On the walls are a striking number of paintings about cows, meadows and farmers: something I have – as an Antwerp resident in East-Flanders – no further comments on. On the second floor you’ll learn a lot about what life in Deinze used to be like. Two industries brought prosperity to the city: silk weaving and the production of prams and toys. Outside the museum a surprisingly large flock of chickens roam around (I’m not making this up). This is another thing I – as an Antwerp resident in East-Flanders – have no further comments on. Mudel embraced them though, and gave them a fancy new chicken coop shaped like a giant egg, designed by Belgian artist and comedian Kamagurka. What came first? The egg or the chicken in the egg laying another egg? Deep stuff. I think I’ll have to sit on it for a while. www.mudel.be

There, this should give you everything to keep you busy on your next weekend in Deinze. Did I forget anything? Is your favourite Deinze spot not on the list? Are you from Deinze and should I keep my arrogant, big city dwelling mouth? Tell me all about it in the comments below.

For all information on the Lys Valley, click here www.toerisme-leiestreek.be/en.

Looking for some other Belgian trips? Read my posts on Bruges, Waterloo, Mons, Spa and Koksijde. 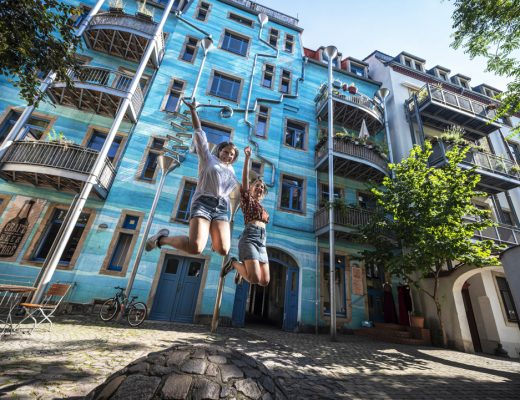 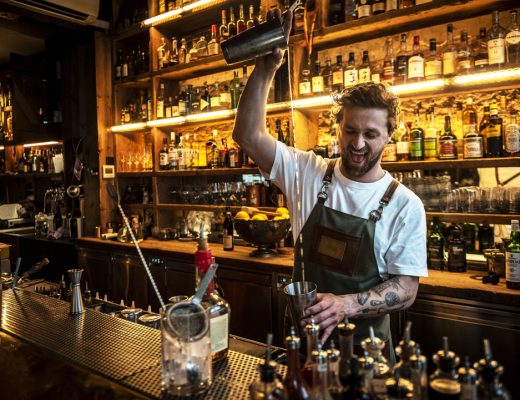 The 7 best cocktail bars in Antwerp