Fancy a fun, cultural city trip? Try Mons in Wallonia. It’s not only the capital of the Belgian province of Hainaut, it also has a rich history and is bursting with museums. Trot Op! went to visit the Art and Culture Biennale of the French Community and listed the top activities for you. 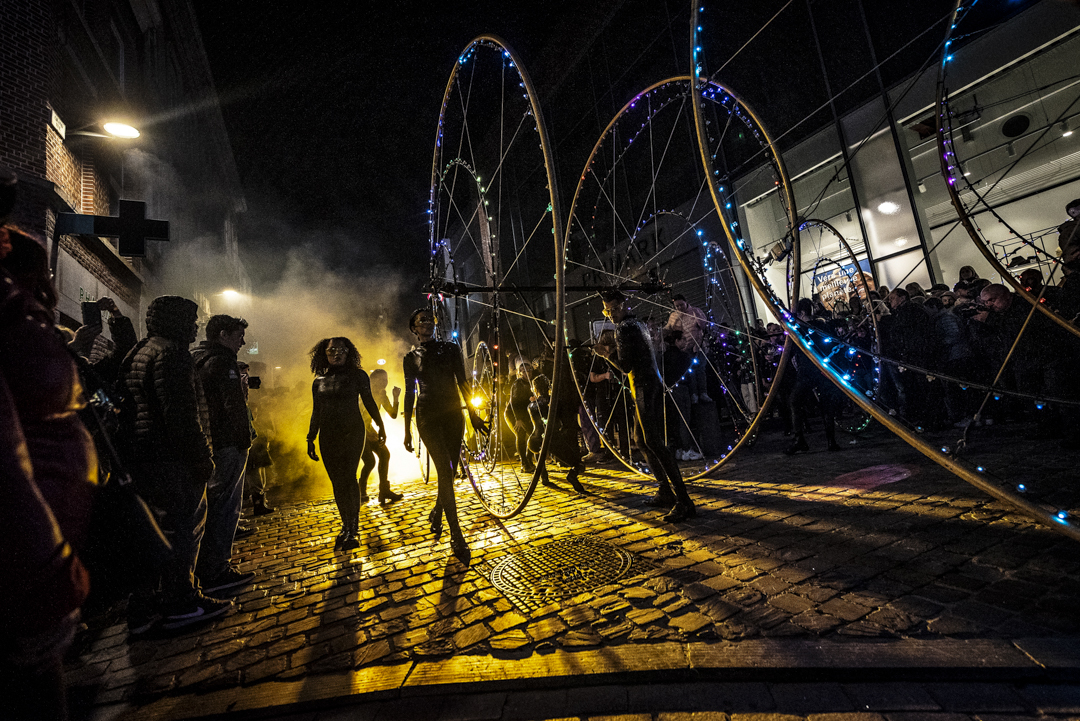 Those of you fortunate enough to have met me in real life will of course know me as both a great artist and a celebrated art connoisseur. (You know what’s a beautiful painting for example? The Mona Lisa by Leonardo Da Vinci: just wow!) Therefor it felt only natural to be personally invited to the Art and Culture Biennale of the French Community in beautiful Mons last month. The Biennale is a major event that puts everything the city has to offer in the fields of art and culture thoroughly in the spotlight. After all, in 2015 Mons was declared European Capital of Culture, and this came with many improvements and innovations of the existing cultural offer, which you can still enjoy today. This year a lot of new stuff is on the program as well, including a major Botero exhibition, four different thematic nights and a celebration of the local Italian cuisine – which will certainly delight a certain bowtie wearing former mayor. Being a graceful gazelle myself, I was invited to the Night of the Dance this October. I’ve jumped in my car for less appealling offers.

Even without the Biennale, there is of course more than enough to do in Mons to make for a great weekend out. If you want to experience Mons at its wildest, you should go and see Le Doudou the weekend after Whitsun. This is a completely crazy folk festival declared cultural world heritage.  Half the city goes into a boozing frenzy and ceremonially parades the shroud of Saint Waldetrudis from the church sharing its name, just to slightly less ceremonially shove it back in there the following day, to then finally have the chosen village idiot of the year dress up like Saint George and fight a wooden dragon, while the rest of the frenzied crowd tries to snatch horsehair from the poor beast’s tail. This apparently acts like a lucky charm, and why shouldn’t it? The church itself is a colossal building by the way, and should have boasted a spire of no less than 190 meters in height. However, because the Walloons can’t finish anything without us taking them by the hand (c’est just une blague mes amis) after more than 200 years of work, they all said screw it and quickly build a stubby little tower on top instead. As a result, the beautiful and architecturally vastly superior cathedral of my own precious Antwerp is still the tallest in the country. Haters be hatin’. But enough laughs for now. Here are 6 things you should definitely do on your next city trip to Mons. Go for it, my friends!

1.  A small Love Parade on the night of the dance 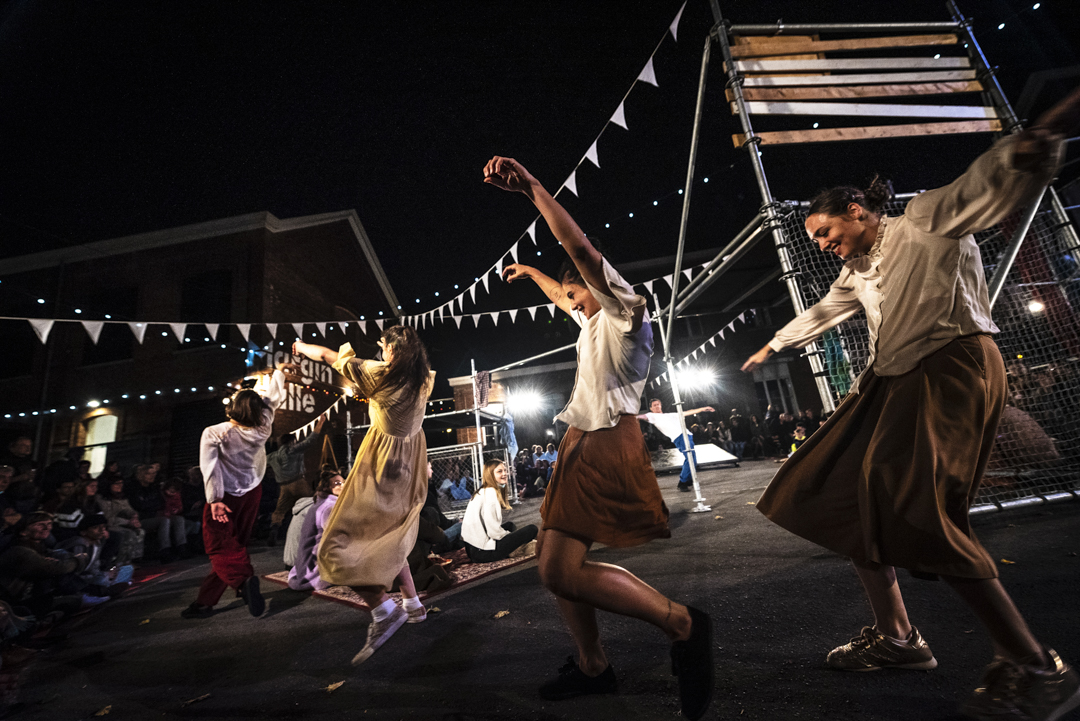 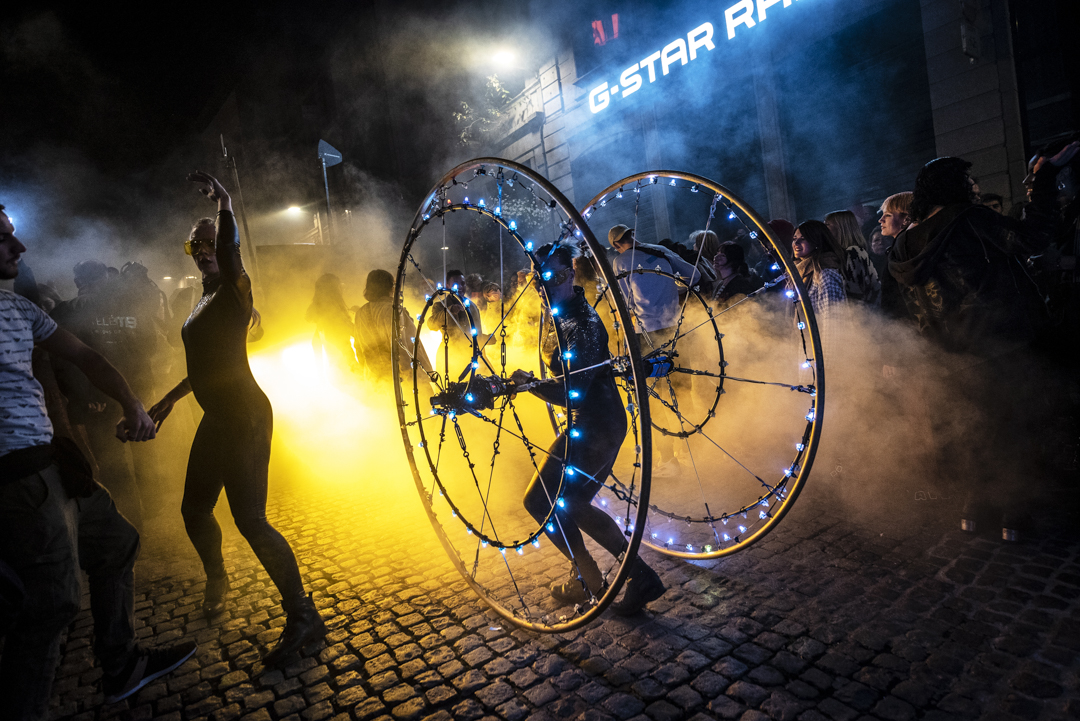 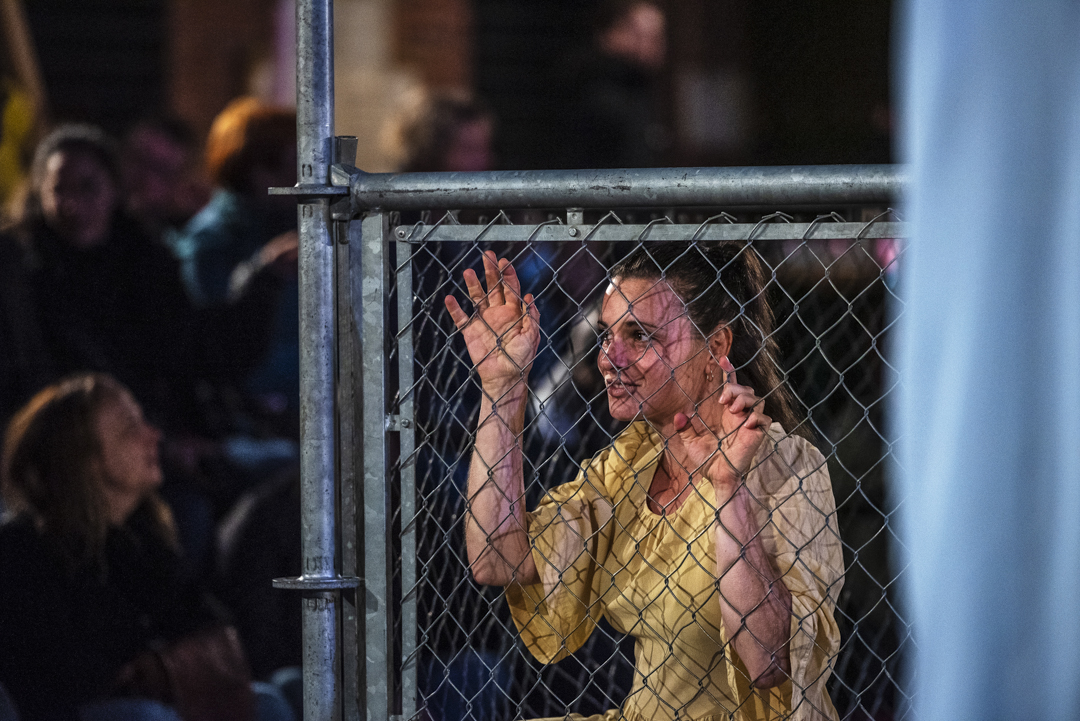 It’s hard for me to start an article about the Mons Biennale without talking about the actual event first. The whole weekend, dance performances could be attended all over the city. Some were no more than well-intentioned artistic projects or high school performances granny might leave the house for on a clear day. Three things stood out to me though. Juke-Box by Louise Vanneste came with a lot of kinky stuff done on kangaroo balls to Where is my Mind by The Pixies – what’s there not to love? Mirage (Un jour de fête) by Compagnie DYPTIK in the beautiful Maison Folie was a thrilling dance show bringing everything from modern to breakdance and rousing gypsy music. If you ever see these people on a poster somewhere, buy a ticket. The real highlight of the evening was the Color Wheels closing event. Here, a colourful procession waded through the crowds, accompanied by large, moving light installations and hard techno music. It actually gave me some Love Parade vibes. Corona was nowhere to be seen for a moment, and that felt pretty good. 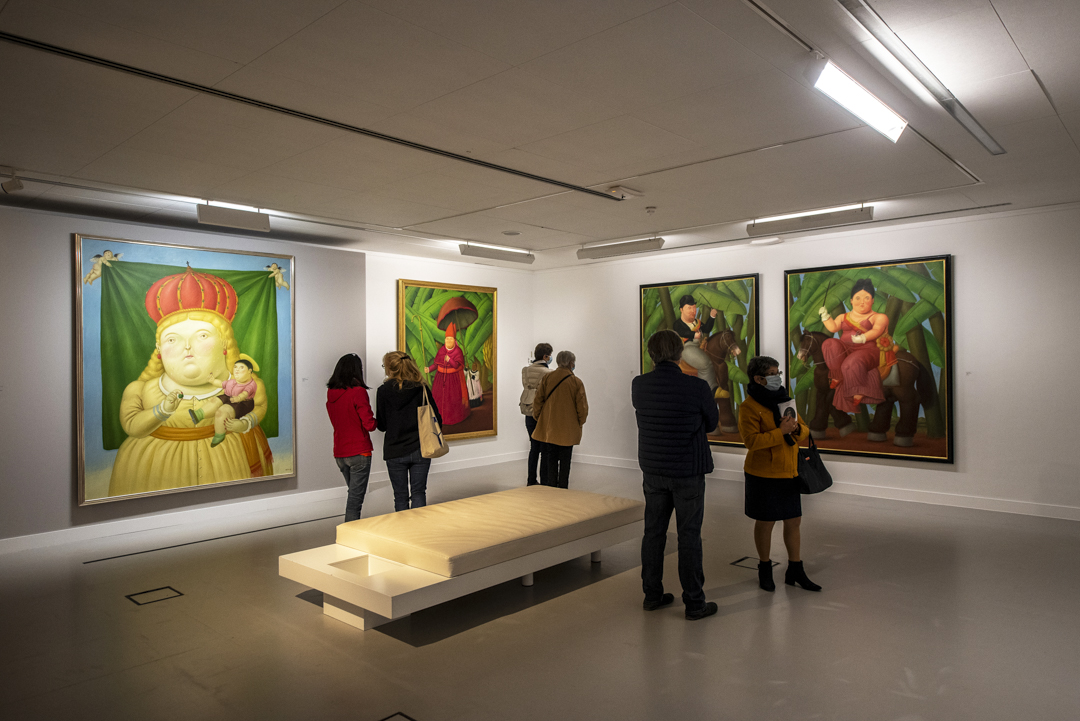 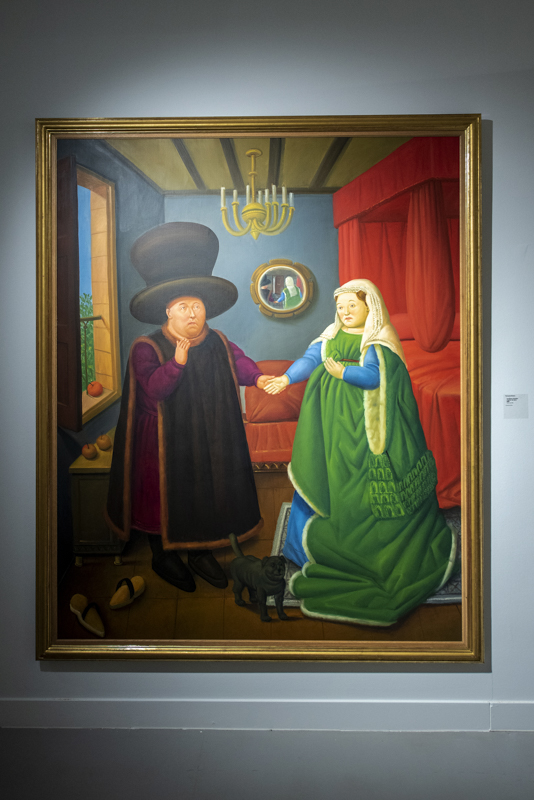 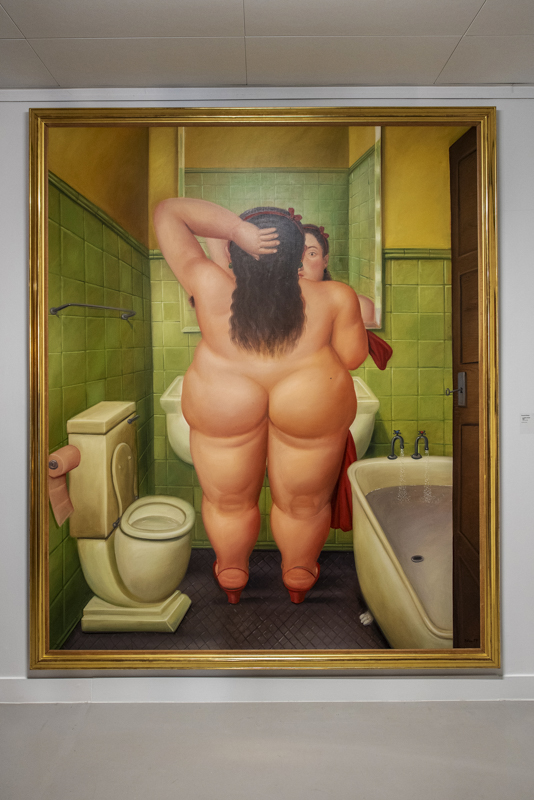 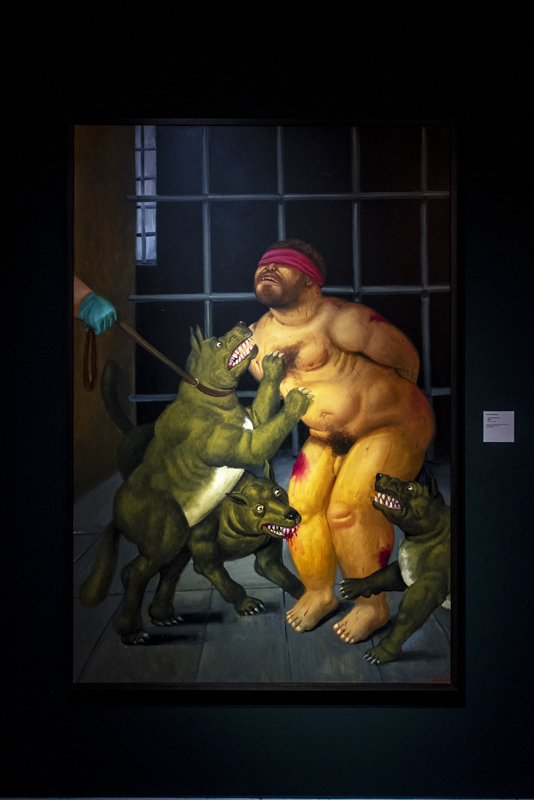 Colombian painter and sculptor Fernando Botero has to be one of my favourite contemporary artists. His models’ huge butts, bloated heads and comically small faces always look both hilarious and a little tragic to me. A Botero retrospective, occupying the entire museum, will run until January 30 at the BAM (Beaux Arts Mons) and it’s a gem of an exhibition. In the first few rooms you’ll see the man’s style evolve and blossom through a number of early works. Then all the iconic fatties pass by – ironically this also functions as a retrospective on the evolution of my chunky ass during the first lockdown. Some of my personal favourites are the works of Van Eyck and Van Gogh Botero imitates in his own style, and another painting in which he flawlessly portrays the sadness of the average bourgeoisie party through a bunch of unchaste figures having half an orgy while their faces stay completely blank. Botero suddenly gets quite serious in the last couple of rooms, with works on the Colombian civil war and a whole series of gory canvases depicting the atrocities of American guards in Abu Graib prison. Don’t forget to check the video with his interview at the end of the expo – quite an interesting man to listen to. 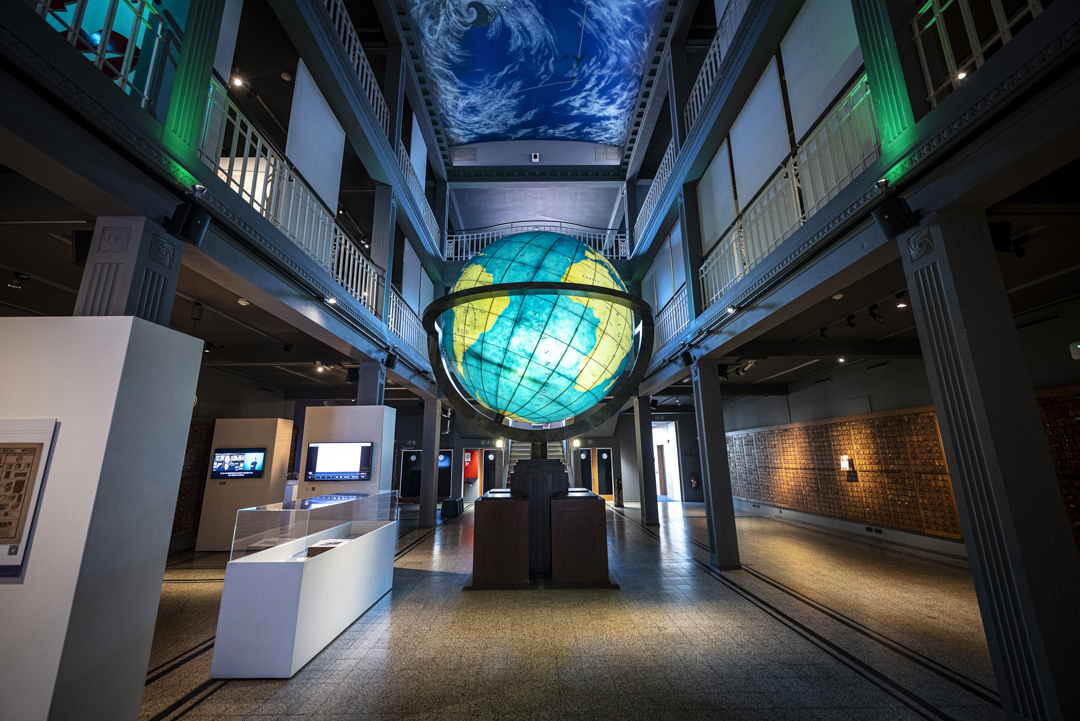 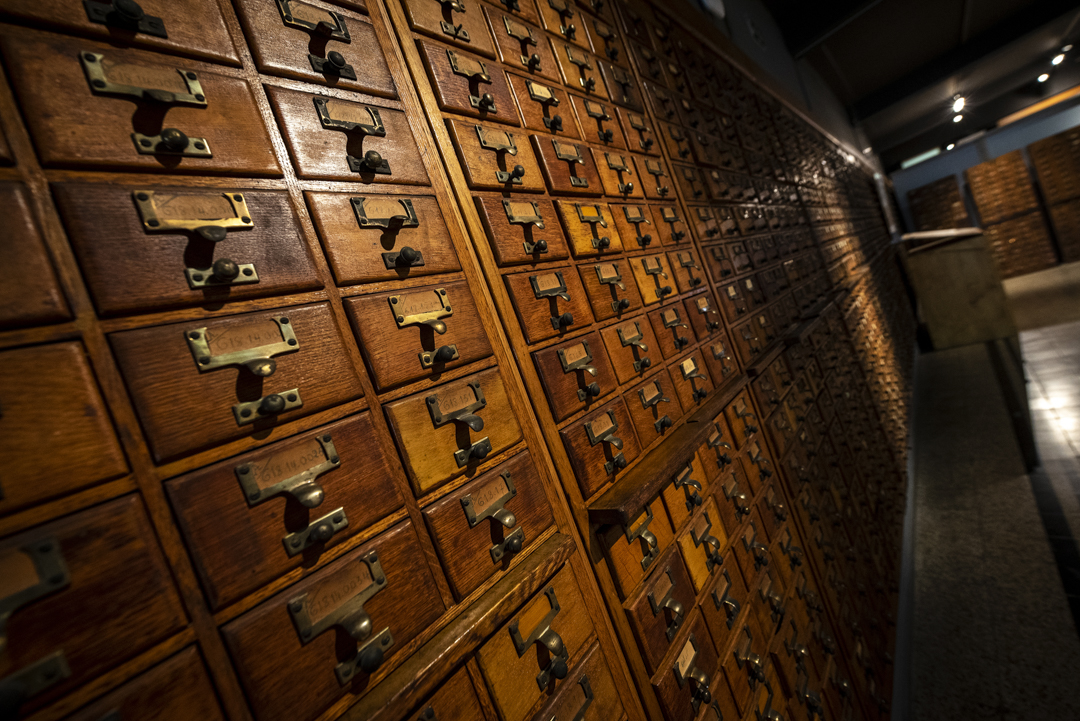 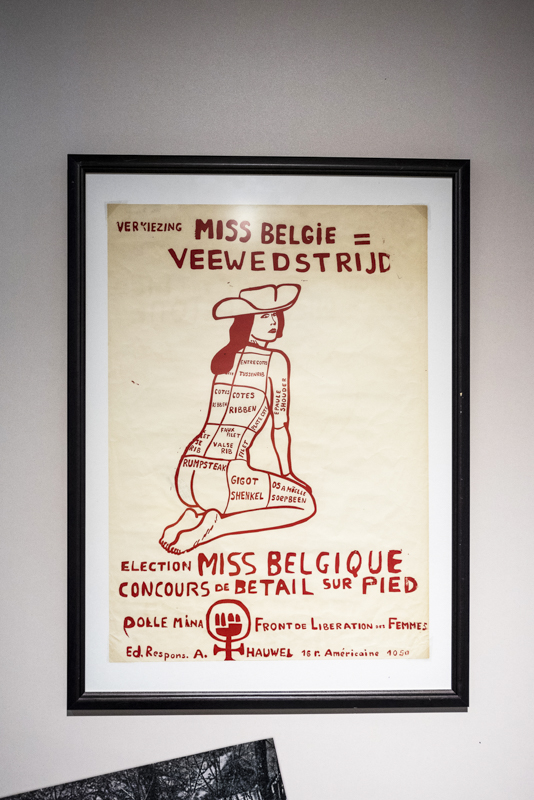 Mons boasts an astonishing number of great museums (the wonderfully old-fashioned Regional Museum of Natural Sciences, with some rather hilariously stuffed animals, was sadly closed for restoration) but perhaps the most unique of the bunch is the Mundaneum. It houses the remnants of a titanic work by Belgians Paul Otlet and Henri La Fontaine (who later received a Nobel Prize) which had the intention of bringing all of the world’s literary knowledge together on small chip cards. It opened in 1910 and in the end they accumulated more than twelve million bibliographic records, allowing one to find almost everything that was ever written down throughout the course of human history ordered by category. At the height of the project, the rows of drawers occupied more than 150 rooms in Brussels’ Palais du Cinquantenaire. Unfortunately the project – which was later dubbed the “Paper Google” – was shut down in 1934. The Mundaneum that can now be visited in Mons is just a fraction of what the original must have looked like. Nevertheless, the long rows of cabinets will give you a good idea of ​​the original atmosphere, and the interactive screens allow you to do some “research” yourself. On the upper floors you will find temporary exhibitions. Right now, there’s one on the strangest fait-divers they found in the catalogue, and another on war propaganda. www.mundaneum.org 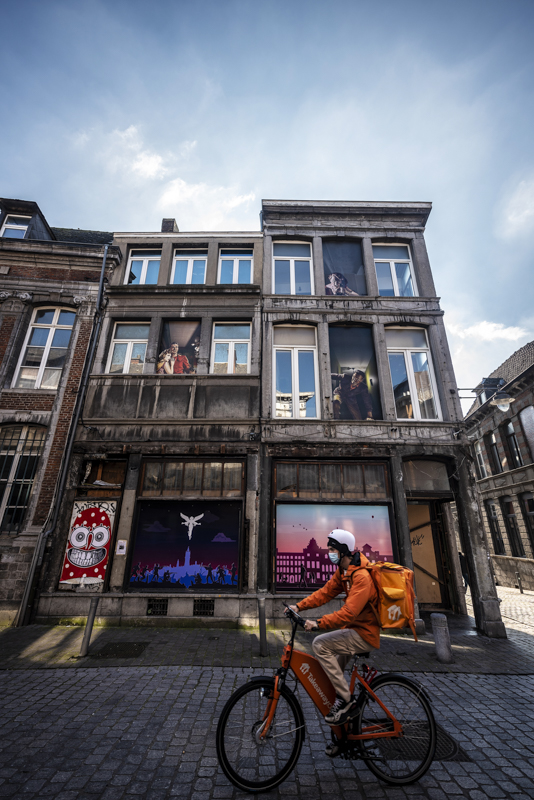 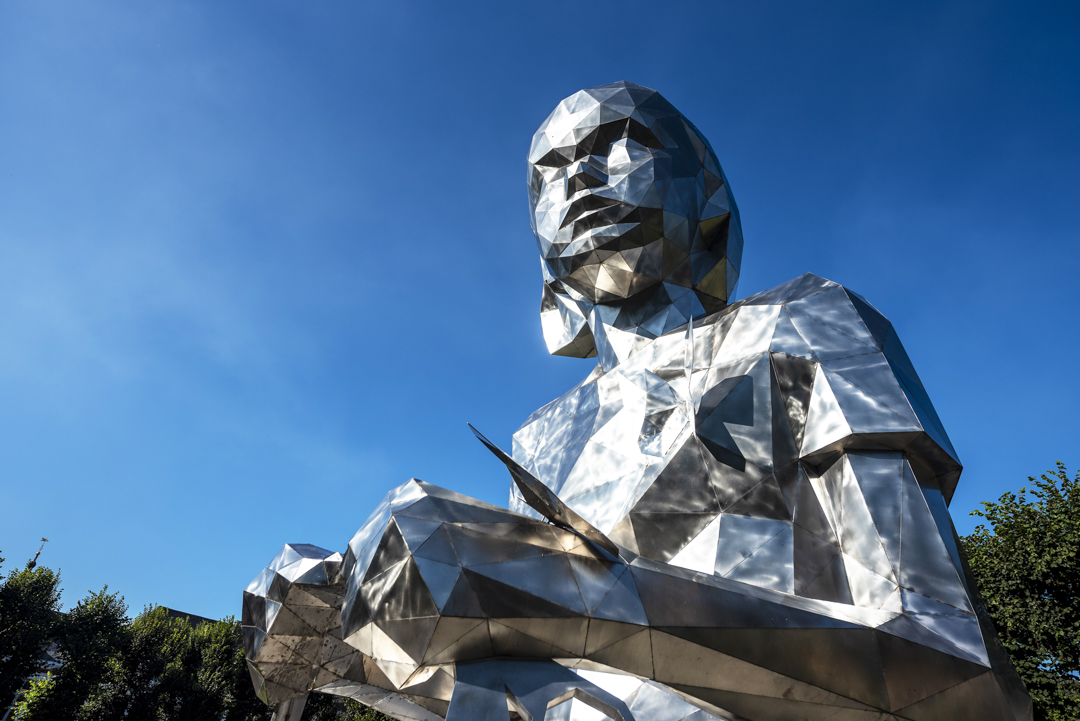 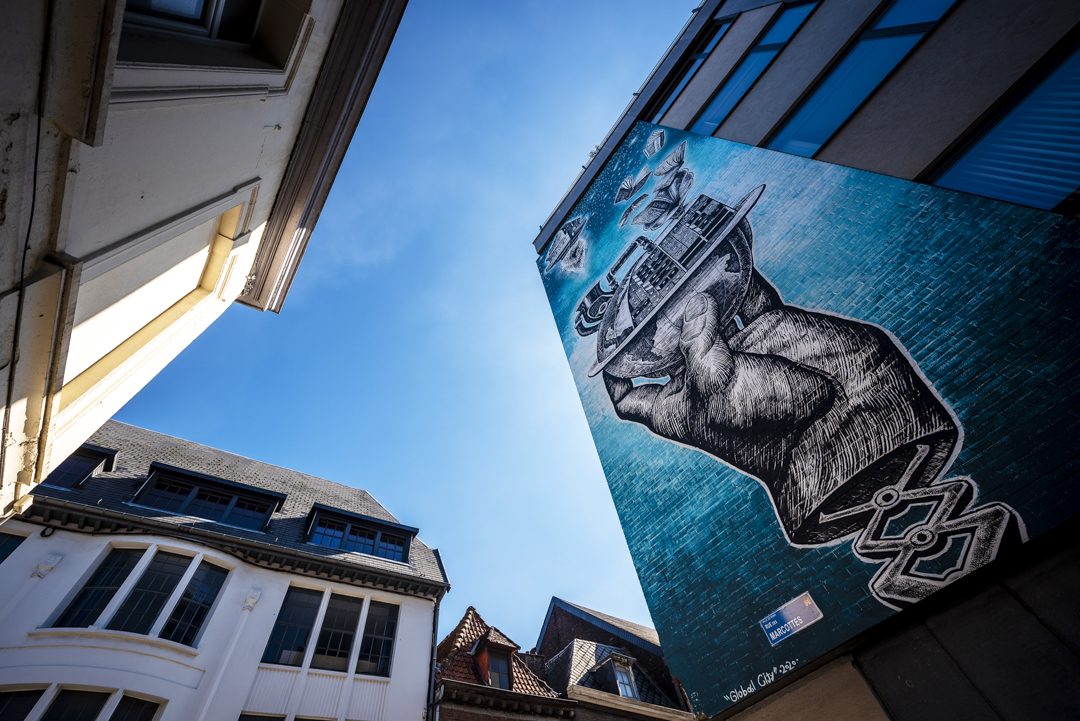 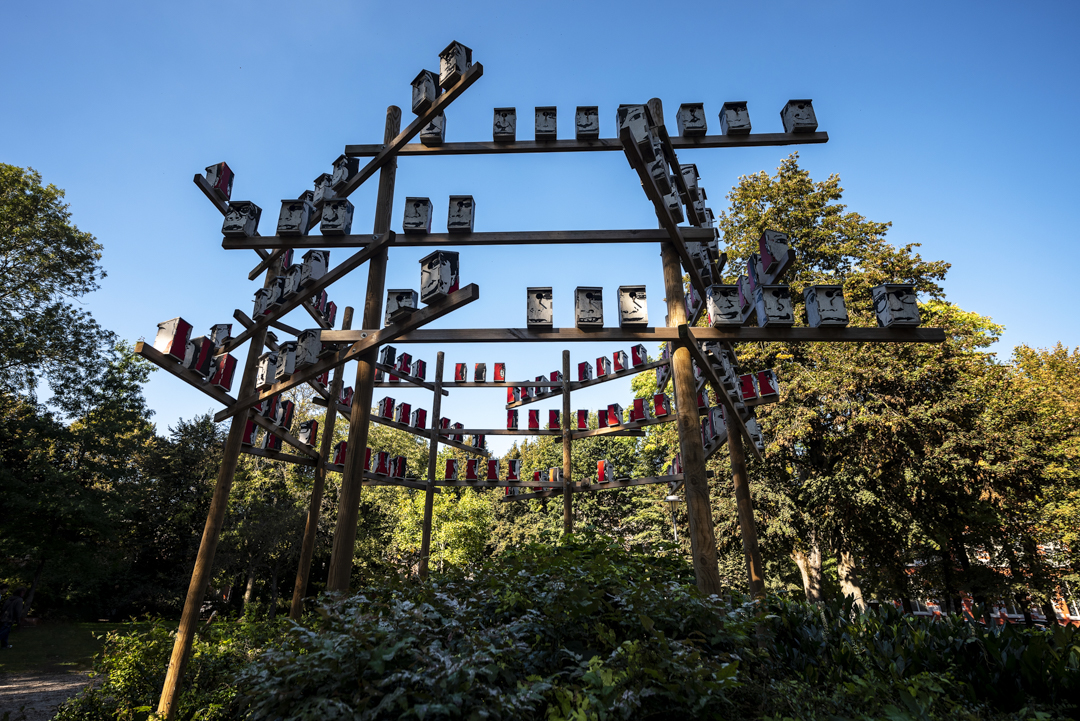 When Mons got to be the European capital of culture in 2015, quite a lot of art was added to the public space. Since then it hasn’t stopped, and with a nice map from the tourist office, you can go and have a look at all of it in a single walk.  The best known piece of street art – The Passenger by professional guy-who-puts-ugly-stuff-in-random-places-ruining-the-view Arne Quinze, semi-collapsed before the festivities even started, got reconstructed and eventually completely removed, but there’s more to discover. Lots of beautiful and sometimes even thought-provoking graffiti adorns the walls of all kinds of buildings, and even the cobblestones in one of the shopping streets got some more cheerful colouring. It doesn’t stop with graffiti though. Blanc Murmure – La ville dans la ville in Place du Parc for example, is a sort of apartment building for birds. 160 residents made their own birdhouse and added their mugs to it later. Charming. My personal favourite is David Mesguich’s Lucie et les Papillons across from Saint-Waldetrudis church: a monumental metal statue of a young girl who falls in love for the first time. As always, you can find all works on the handy Street Art Cities app. 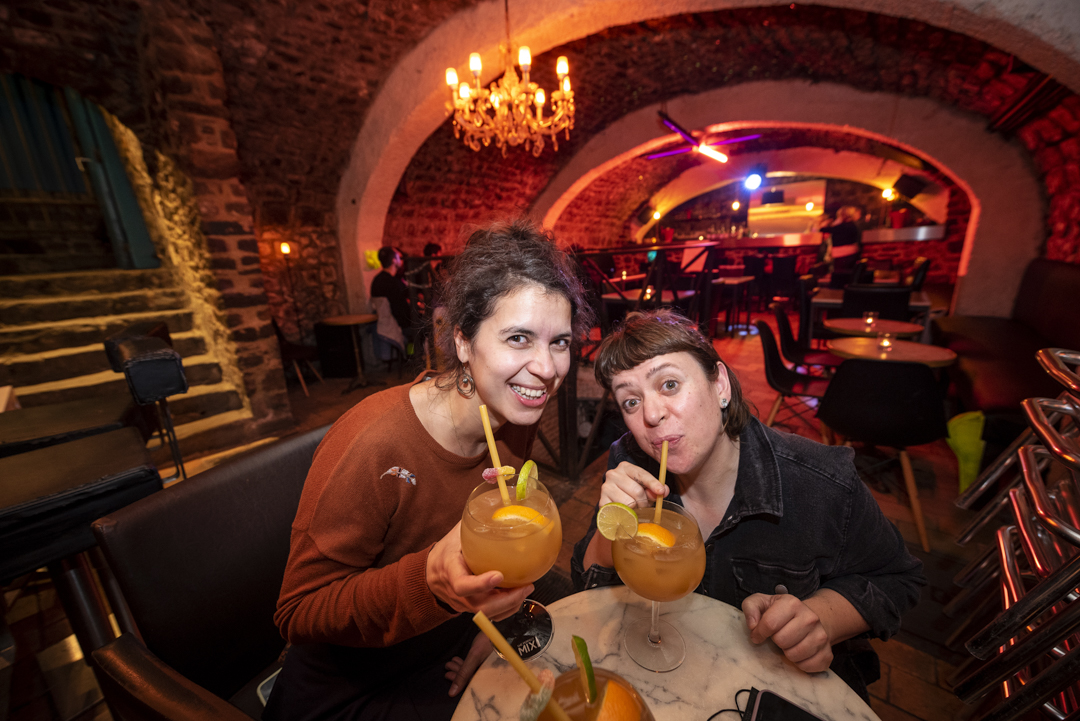 With almost a hundred thousand inhabitants, Mons is a large city by Walloon standards. Add to that 15,000 students and you quickly get a lively destination. The city was of course a bit busier than usual when I was there – first weekend of the Biennale – but there’s always a party to join on regular days as well. Want to be surrounded by a bunch of scantily clad teens while having your drinks? Head to Marché aux Herbes, where most of the student bars are located. Looking for a more diverse crowd? Wander the streets leading to the Grand Place instead. We decided to surprise ourselves and headed into some random dungeon looking cellar. This turned out to be cocktail bar Le Chinchin: a nostalgic booze hole selling its own homemade liquor, and cocktails called “French-y-pan” served with macaroni with some candy wrapped around it as a straw. Funny, but surprisingly tasty as well. Want to fill your stomach with something gastronomically acceptable before heading out for drinks? I ate very well at Brasserie Oscar, and you will too. www.oscar-mons.be 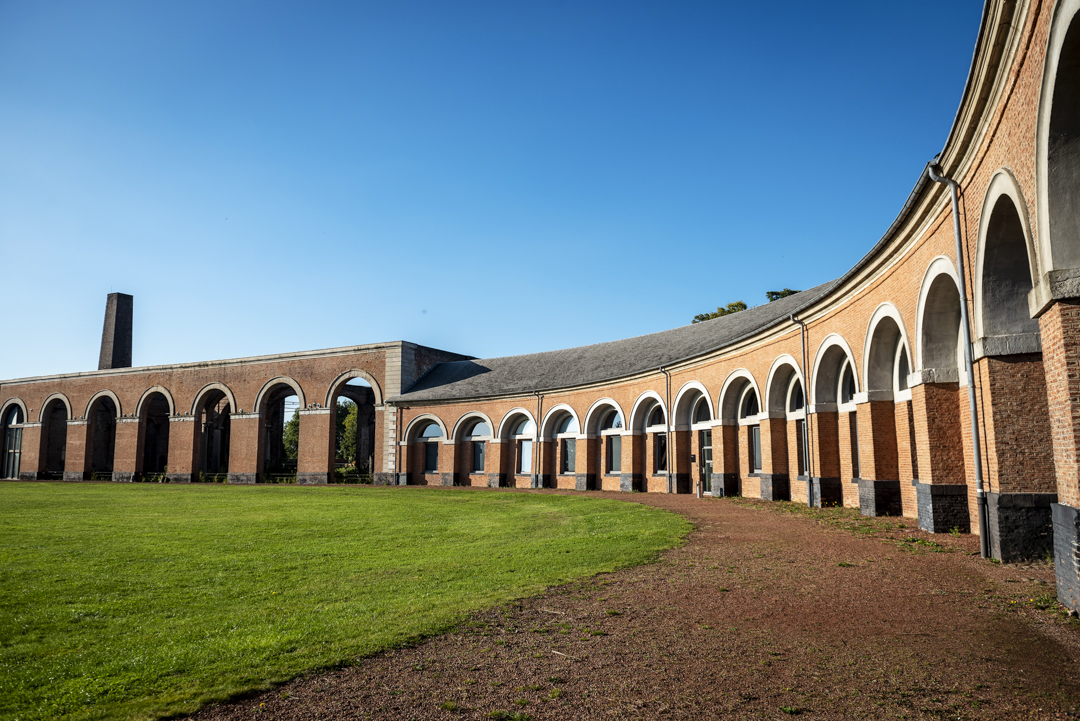 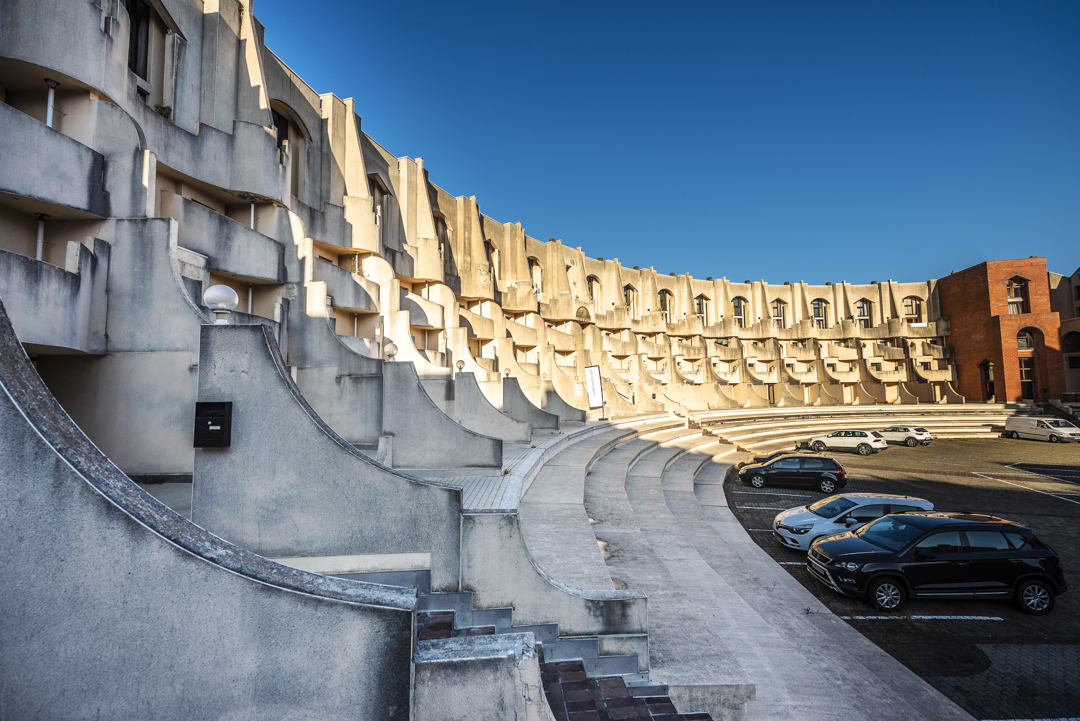 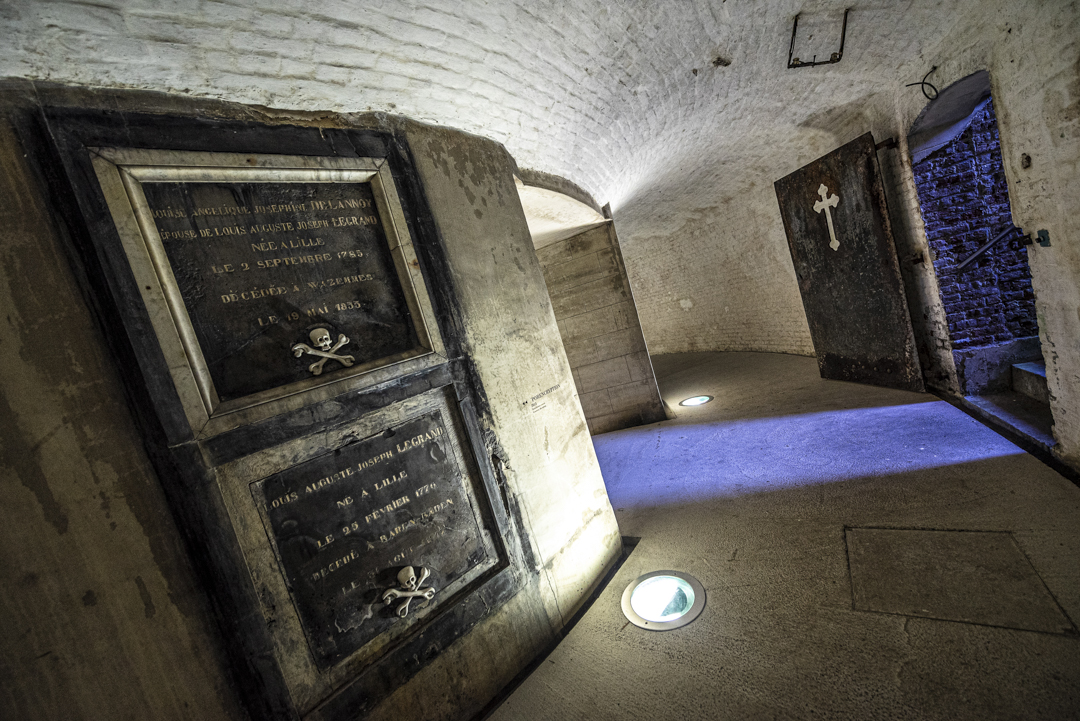 Arguably, Mons’ most important heritage site is located a 20-minute drive from the city centre in Boussu. Here you will find Le Grand-Hornu: an impressive neoclassical building complex dating from the early 19th century, sitting atop an old coal mine. This was the brainchild of industrialist Henri De Gorge, who wanted to build a residential complex offering a level of comfort unseen at the time. Each of his 450 worker’s cottages came with hot running water, a yard and a surprisingly fast Wi-Fi connection (that last one is a lie). He also built a school, a library, a ballroom and a free clinic for his labourers, which gave them something to do with their dust lungs on their days off. The mine was closed in the fifties, but the buildings got repurposed 40 years later. The site went through a thorough restoration process and now houses two museums. Grand-Hornu Images focuses on design and applied arts. MAC’s exhibits contemporary art. The Grand-Hornu site itself can be visited free of charge and is worth the drive by itself. Don’t forget to descend into the family crypt in the back, and visit the apartment block built by Manuel Nunez next to the mine while you’re at it as well. This is a fascinating, almost otherworldly ugly building built around a parking lot in Roman theatre style. In my imagination, the residents battle each other like wife-beater clad gladiators for the best spots every day.  Check out an early 90’s video on the building right here.

Hotels in Mons and practical information 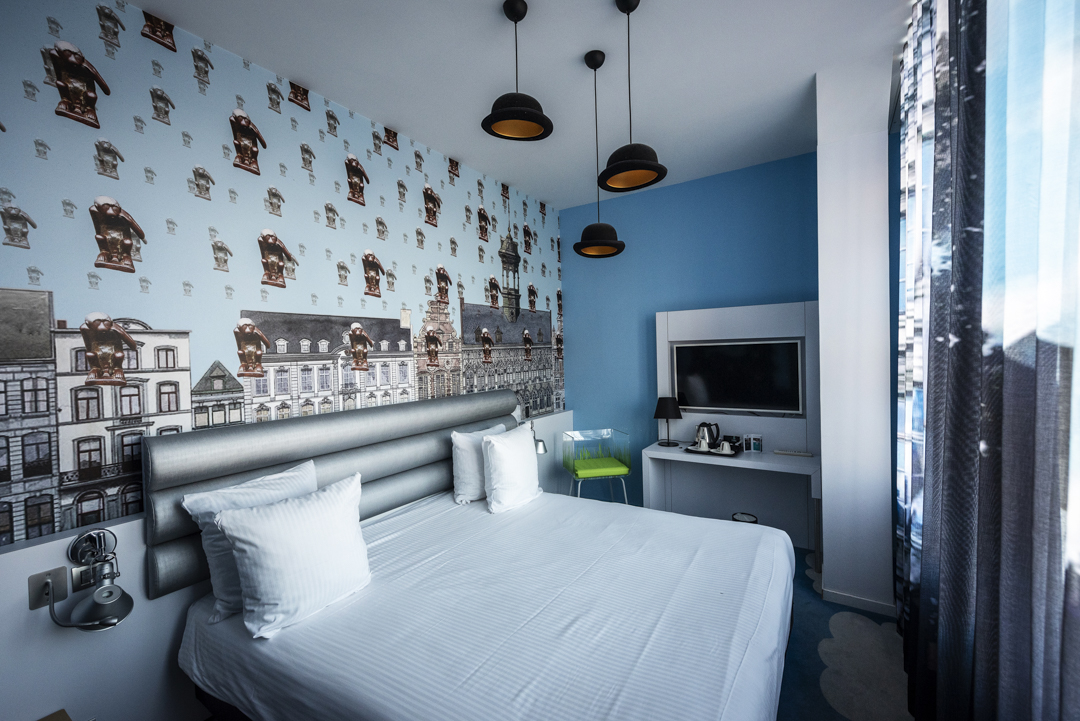 During our stay in Mons we slept in the trendy Martin’s Dream Hotel. The nice thing about this place is that many rooms have been given unique decorations matched with their name. Mine was called the Magritte room, so all the walls were decorated with his paintings – supplemented by the famous bronze monkey from the city hall – and my chandelier was made from a bunch of floating bowler hats with a lamp in them: very well done. To add to this, I could also enjoy a splendid view on the city’s baroque belfry from my bed. Ceci n’est pas une pipe de brol.

If you want to know more about Wallonia as a destination, surf to www.walloniebelgietoerisme.be.

Fancy some other visits to our Walloon neighbours? Read my blog posts on Waterloo, Charleroi, Liège, Spa, Virionval and Gaume here. 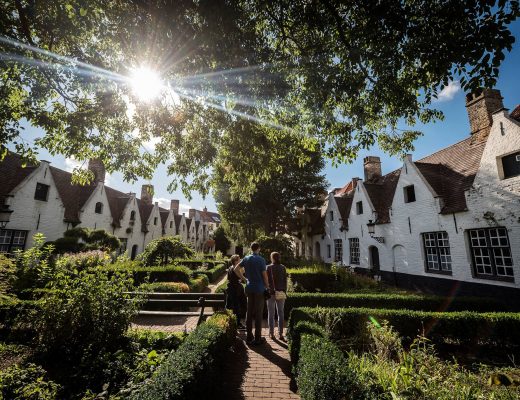 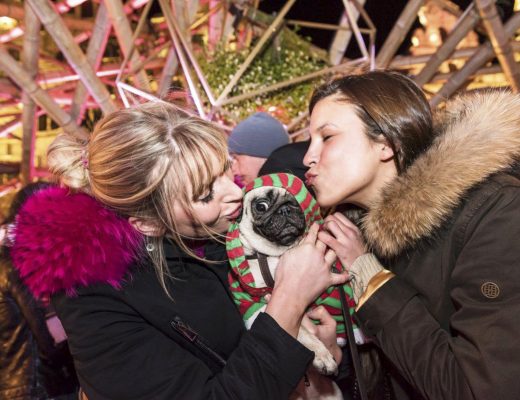