Alternative Aruba: four tips for when you’re done with the beach 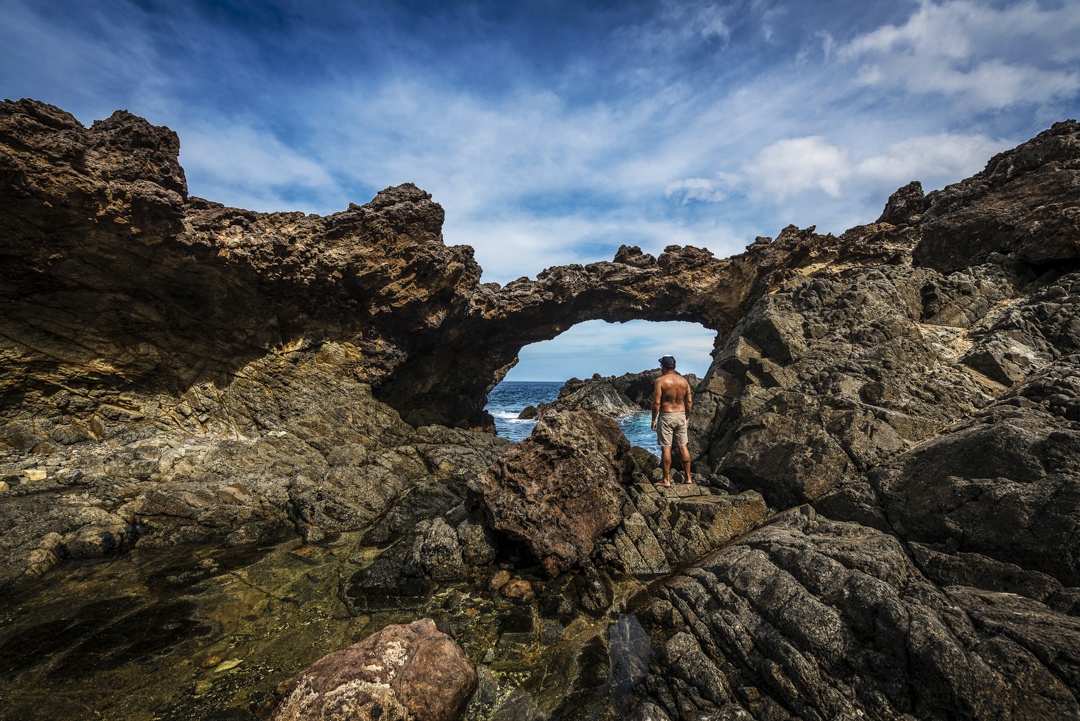 Did you know Aruba – despite having its own flag, parliament and head of state – is officially still part of the Kingdom of the Netherlands? This means that after a ten hour flight from Amsterdam, you’re still just landing in Holland. Bit sad, isn’t it? Despite all that, the island is obviously still a paradise for sun-worshippers. White sandy beaches, azure waters and resorts where the sexy samba-bottomed staff will keep pretending your dumb jokes are funny, even after your tenth piña colada. You wouldn’t get away with it at home.

“Aruba is a paradise for sun-worshippers. White sandy beaches, azure waters and resorts where the sexy samba-bottomed staff will keep pretending your dumb jokes are funny, even after your tenth piña colada.”

Aruba offers all the sun, sea and beach fun you could ever dream of, but for a semi-transparent albino like me that doesn’t necessarily guarantee a fantastic holiday. Every time I take off my shirt on the beach, bystanders start looking straight into the sun to spare their eyes, and when I was recently minding my own business in the North Sea surf, a bunch of Greenpeace assholes started pouring buckets of ice-cold water all over me because they thought they’d spotted a beached beluga. It was of my more shameful afternoons.

For my trip to the island this September, I decided to find some activities allowing me to keep my clothes on. Aruba is a tiny place, but lots of tourists don’t look further than the strip of sand in front of their hotel and an obligatory visit to Oranjestad. There are many surprising things to discover here however. I’ll show you a couple below – but just because I love you, baby. 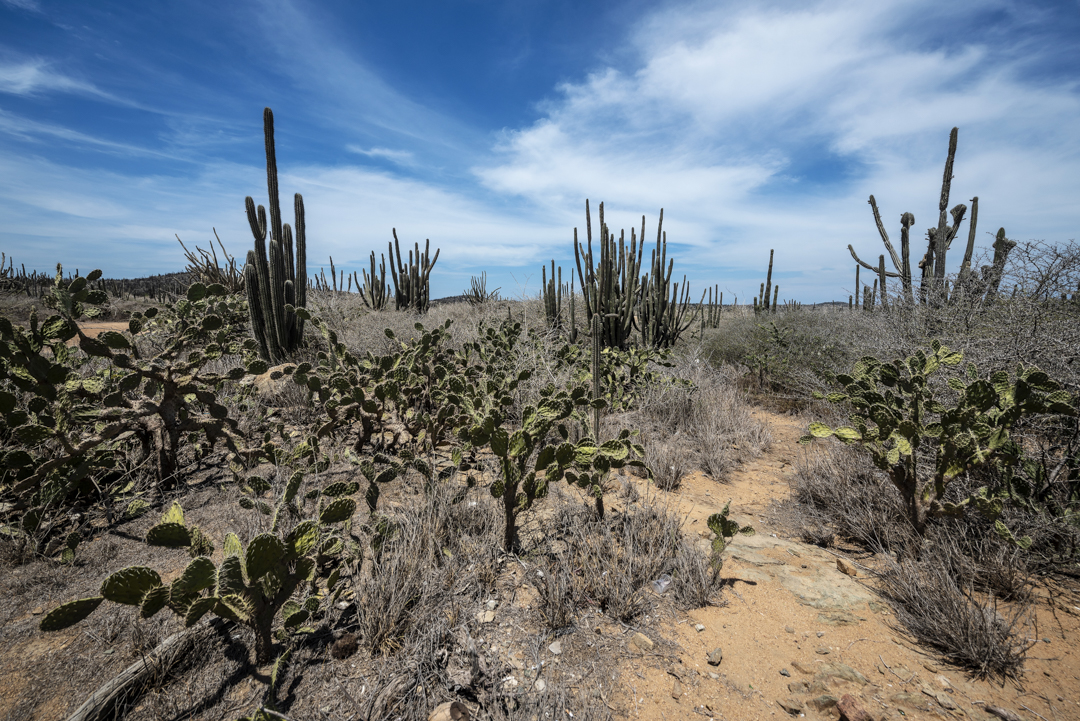 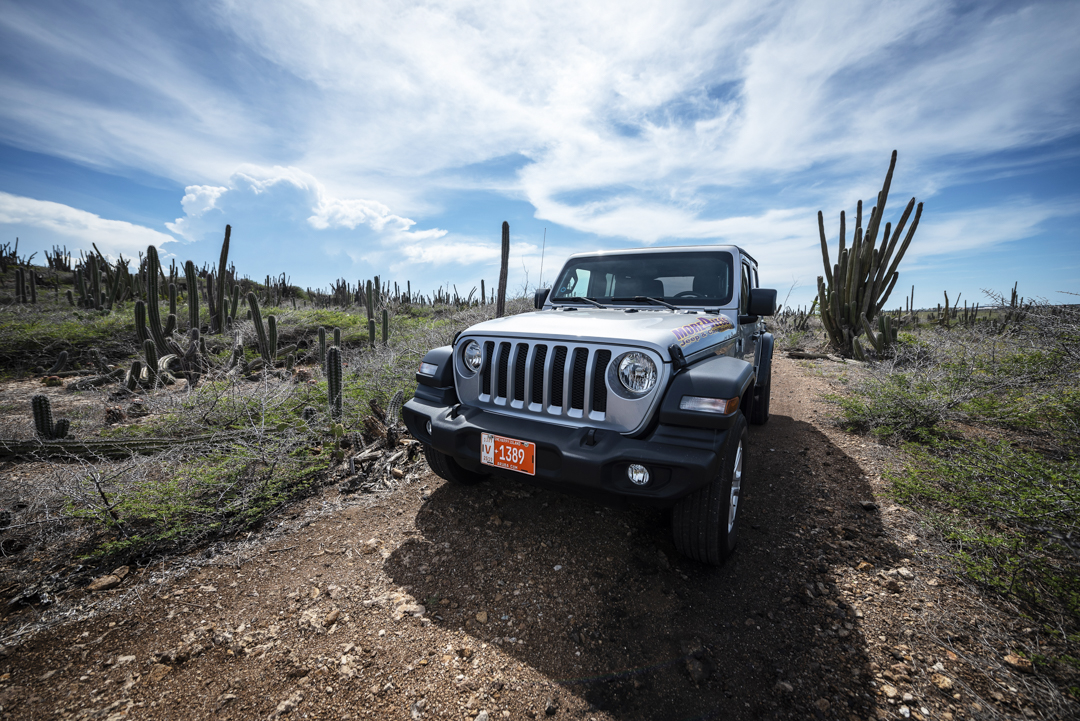 If you’re on the beach sipping cocktails all day you’ll probably miss it, but Aruba is essentially a desert. The east coast and the island’s interior are drier than your ex’s panties, and Arikok National Park is the driest place of all: a hilly wasteland full of dust, giant cactuses, rattlesnakes and extremely shady donkeys. No less than 20% of the island is covered by it, and the whole thing feels more like the Arizona desert than what a Caribbean island should theoretically look like. Several companies offer tours through the area, but do yourself a favour and just rent a car – a fat 4X4 if you don’t want to get stuck. This way, you can do whatever you like on your own time, and you’ll avoid the mind-numbing jokes of your ‘jolly’ tourist guide, while he entertains a bus full of Americans applauding themselves for knowing the answer to a question for toddlers. Mine was so unbearably lame I soon went looking for a snake willing to bite me. Ah, the sweet, sweet bliss of eternal sleep. 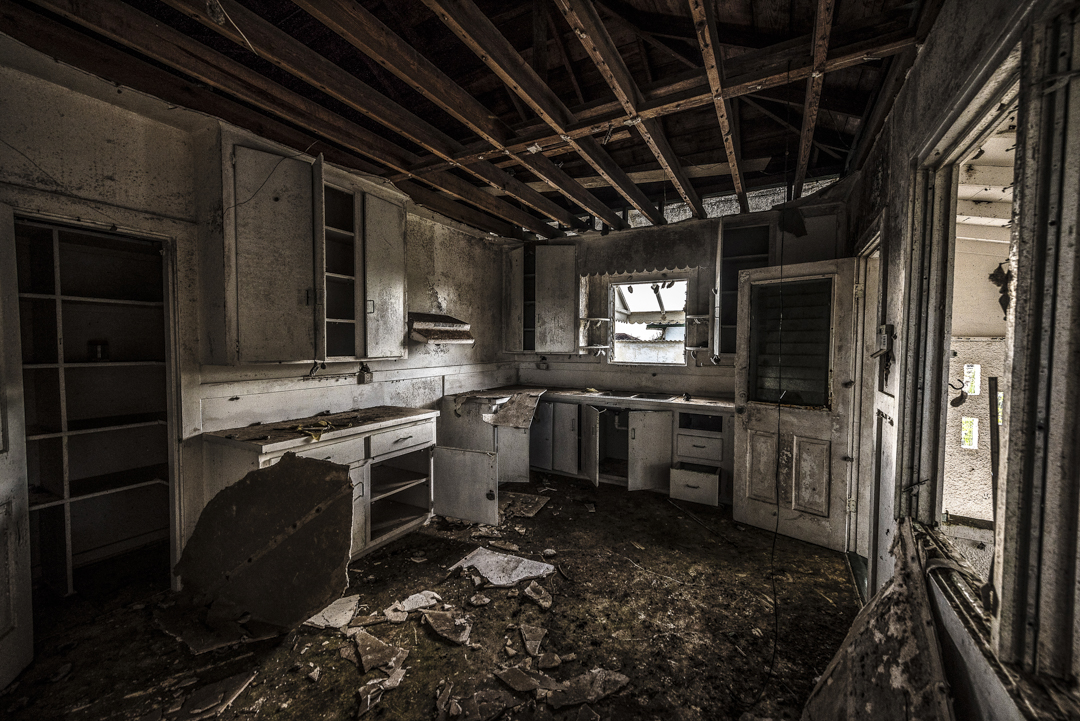 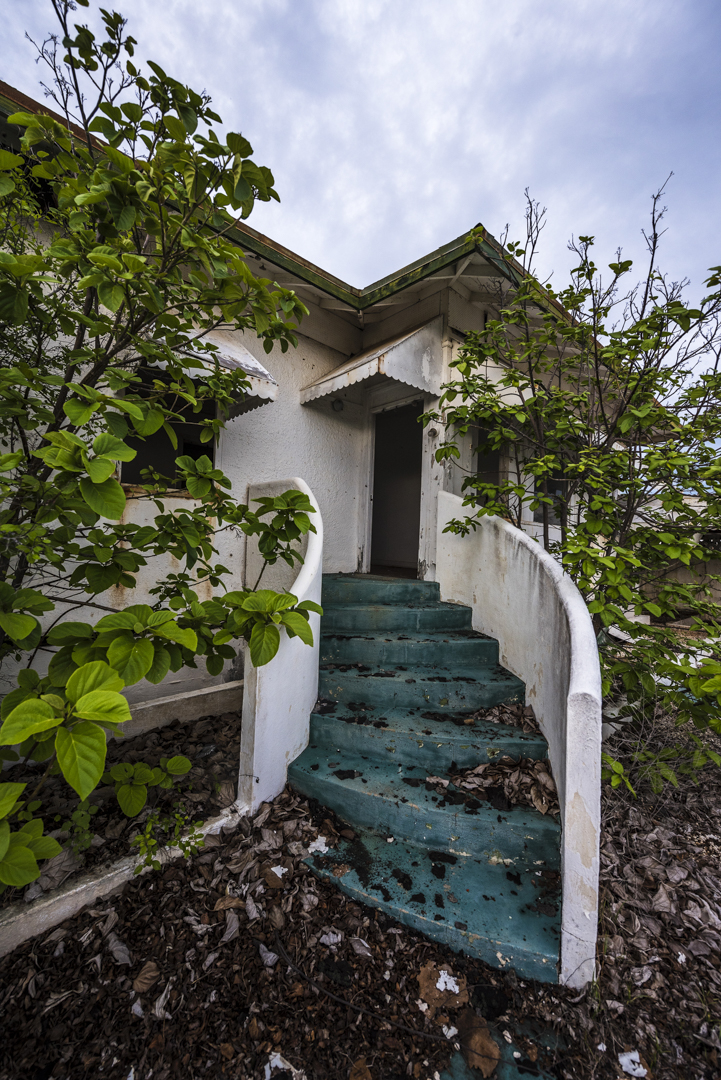 Here’s something you won’t find in any tourist brochures: Aruba is home to the largest oil refinery in the Caribbean. It’s hasn’t been operational for a couple of years now, but it can still be found right next to the lovely little town of San Nicolas. When it was still running, a few thousand people were employed here. Higher management was mostly American, and they lived in nearby Ceru Colorado: a closed community sporting its own shops, bars and private beaches. Since the refinery closed down however, most of the villas stand empty and crumbling. Years of sand, wind and unwashed hobo-squatters turned the place into a photogenic little ghost town in the middle of a desert landscape. You can freely drive through it and enter most of the buildings, and if you feel like it you can take some friends with you, and pretend you’re in a less boring version of The Walking Dead. A number of homes got refurbished and resettled recently – stay out of those ones: it’s called breaking and entering – but the majority is still slowly turning to dust. 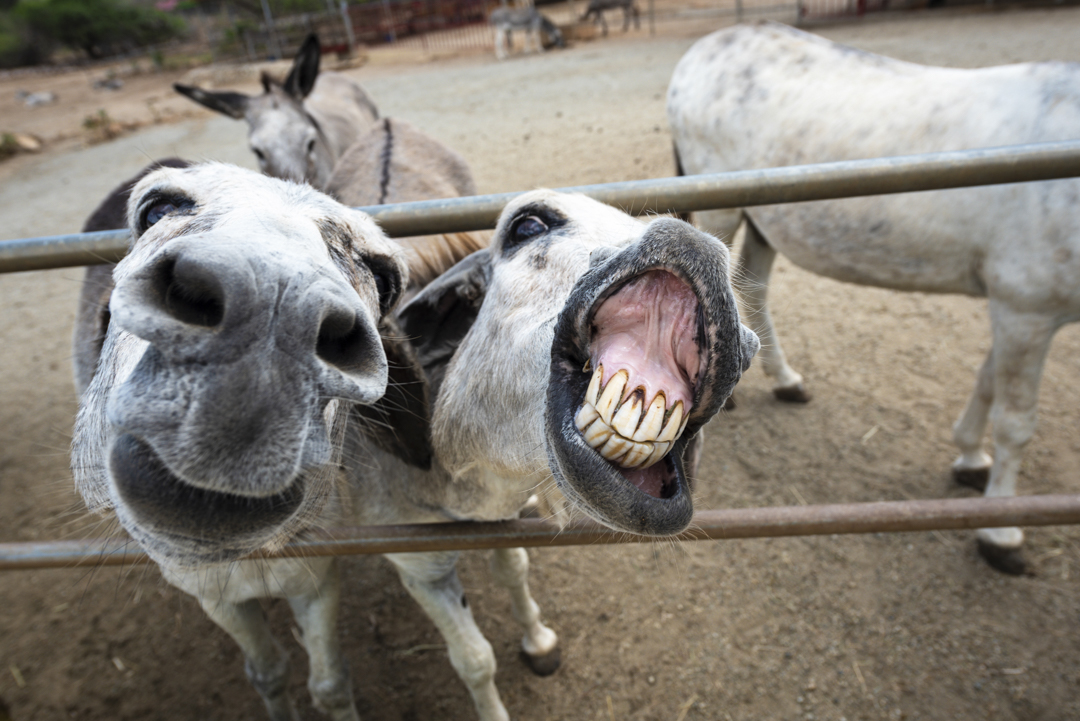 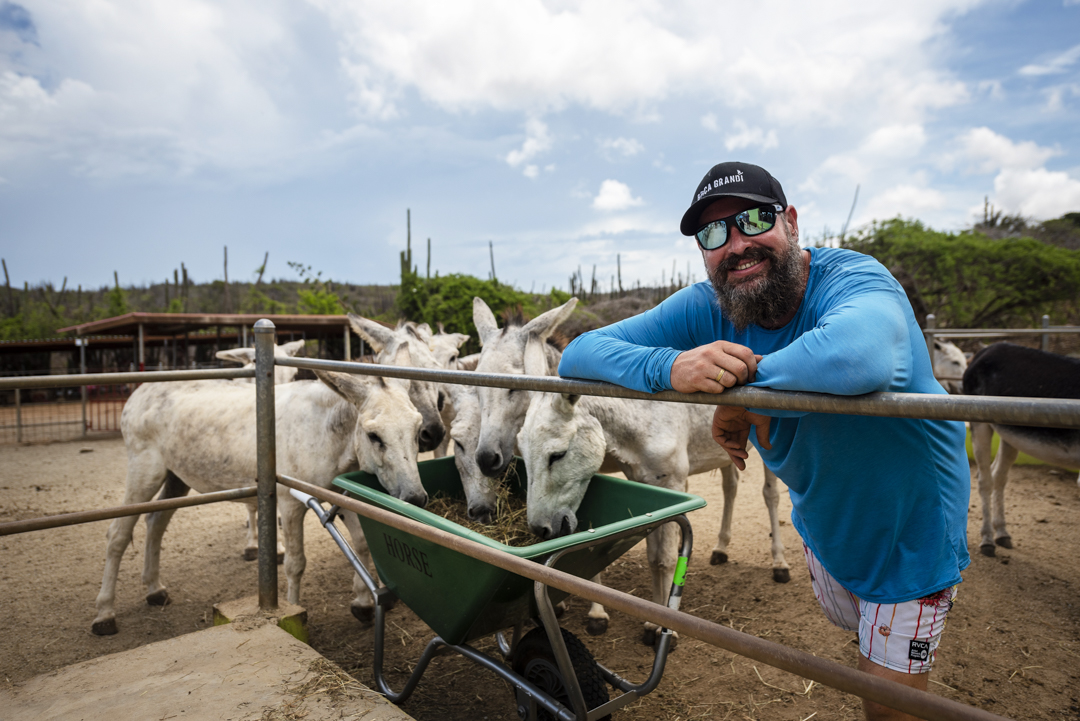 In times gone by, donkeys were the main means of transportation on Aruba. They were used as beasts of burden, and to get drunk colonial Dutch guys from bar to bar. In recent years the car was introduced to handle these matters, but that didn’t make all of the donkeys suddenly vanish into thin air. In the less populated interior, some of them still roam free. Sometimes they get hit by one of their motorized successors. When this happens and the poor animal survives, it is immediately shipped to the Donkey Sanctuary, where it will enjoy retirement surrounded by a bunch of its equally ugly peers.

“In times gone by, donkeys were the main means of transportation on Aruba. They were used as beasts of burden, and to get drunk colonial Dutch guys from bar to bar.”

This safe haven for ALDI-horses is located smack in the middle of the island and can be visited. Here, you can get acquainted with more than a hundred other jackasses, and if you want them to like you, you can even feed them. The centre is mainly run by volunteers, but two people are employed full-time. One of them is Peter from Belgium – it’s a small world after all. He met a pretty Aruban girl in college and wisely decided to follow her to sunnier shores some years later. Buy him a beer for me. He’s a nice guy. 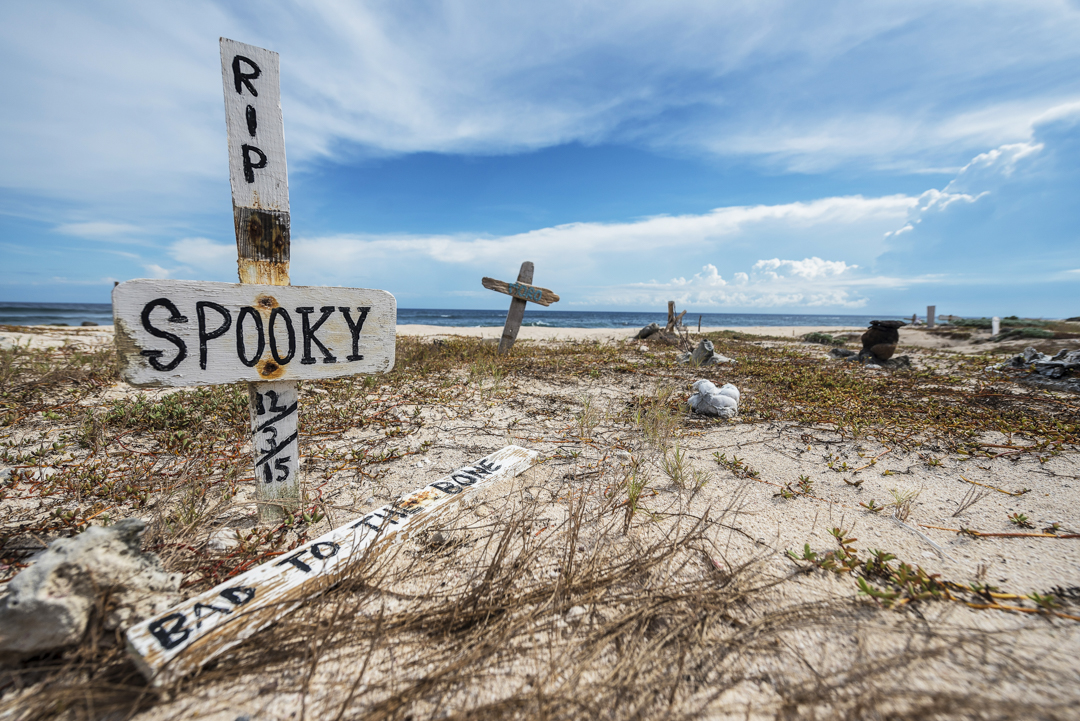 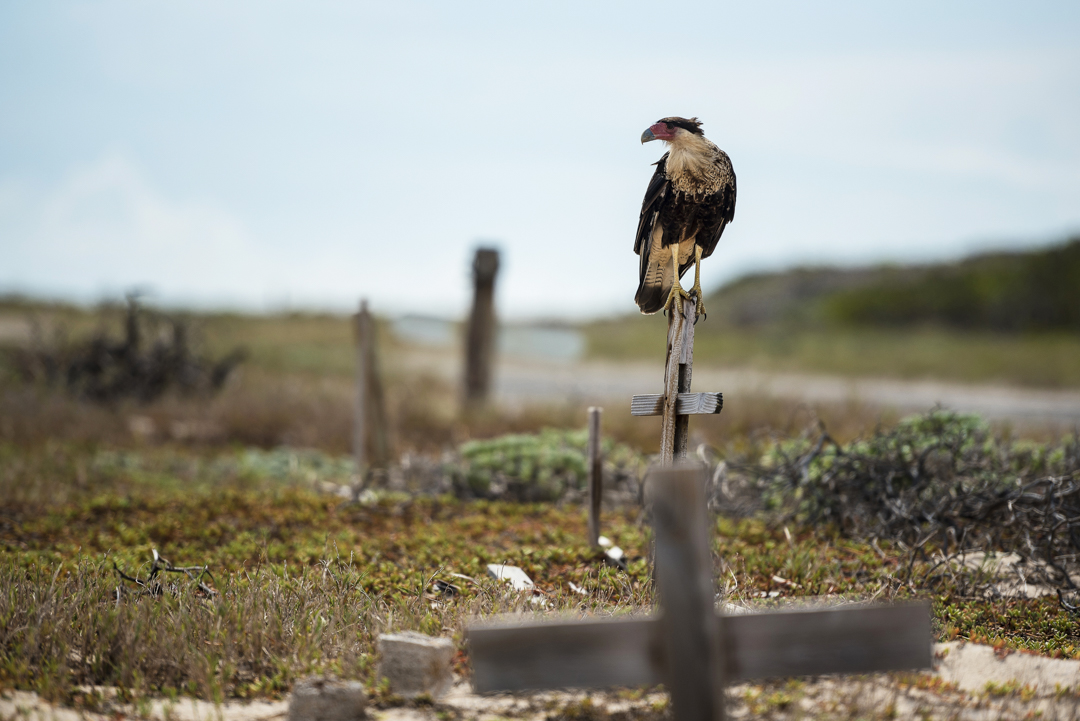 For me, the most beautiful place on all of Aruba lies on a deserted stretch of sand near the popular Baby Beach. For years, people have been using this spot as an improvised pet cemetery, where they stop and bury their four-legged friends who (just thinking out loud here) got caught under a lawnmower or something. Goldfish are still just ceremonially flushed down the toilet, but there are dogs and cats aplenty here. Peacefully standing in the dune grass, are hundreds of lovingly crafted crosses and little tombstones, many of them colourfully decorated with personal messages. Some still have flowers on them, years after the grave was dug. That’ll turn even a cynical bastard like me quiet for a while.

“Goldfish are still just ceremonially flushed down the toilet here, but there are dogs and cats aplenty.”

Lost in thought on how an elegy for a dead dog could possibly sound like (“you were the best of boys, Billy”), I suddenly noticed a giant bird of prey staring at me from a cross just ten meters away. A second one was eyeing me as well, possibly the female. An incredible encounter, and not another soul nearby. I had all the time in the world to take some pictures even, after which the couple graciously took off and left me on the beach dumbfounded. This is exactly why you should always go off the beaten path on every trip you take.

This is where my Aruban adventure ends. Are you a weird albino too and can you finally go on a holiday to the Caribbean in peace?  Are you a tanned jock looking to viciously mock melanin deficiency? Did I forget your favourite place and do you want to tell people? Don’t be shy and go nuts in the comments below!

For all relevant information about Aruba, visit: www.aruba.com.

My official article on Aruba will appear in Goodbye magazine this December. In it, you will actually find out where the best beaches and the nicest places to snorkel are. More info on: www.goodbye.be.

Want to explore Aruba with a cool-ass dude who will not only show you the most exciting spots, but will stuff you with homemade food and cocktails as well? Get on Facebook and search for “Taki Aruba”. Great guy.

Looking for another exotic adventure? Read my articles on  Taiwan, Malawi and Singapore.