Porto is one of the most atmospheric and photogenic cities in Europe, but there’s a lot to visit outside the city limits as well. In the north of Portugal several fun day trips from Porto can be planned. From cosy Unesco towns like Guimarães to the Peneda-Gerês National Park on the Spanish border. Trot Op! booked a long weekend in Porto and its surroundings, and came back with the following six things to see and do. 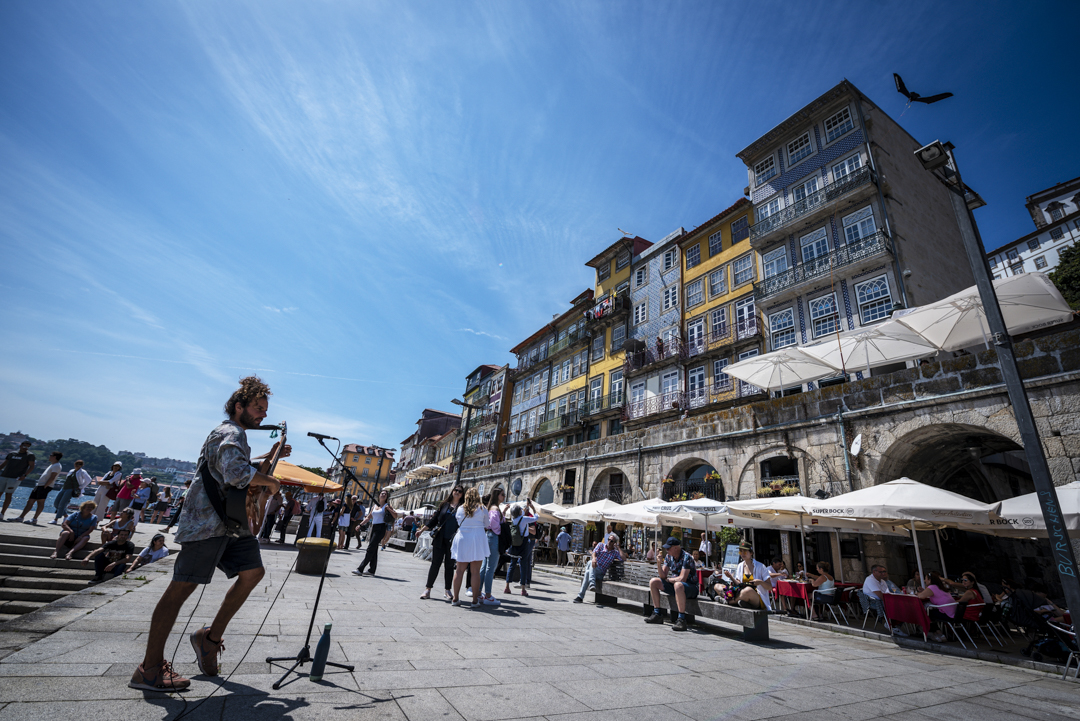 Portugal is one of the most beautiful countries in Europe, as far as I’m concerned. ‘Yeah, but why!?’, I can already hear you shout, so allow me to elaborate. For a relatively small country, Portugal offers an incredible amount of variety. Lisbon is a top cosmopolitan city; the Alentejo is an enchanting, almost empty region combining vast countryside vistas with a beautiful coastline; Madeira is a hiking paradise and even the Algarve is – looking past the colony of human whales beaching themselves under its cliffs every year – a top destination.

“You don’t necessarily have to visit Porto for the big sights, although there are plenty. Here you can stroll around for days and just enjoy the atmosphere, without having to set foot into one single church, museum or other attraction.”

Until recently, I couldn’t say much about Porto and the north of Portugal though, since I’d – you know – never been there. Fortunately that changed this spring, by means of a kindly offered press trip – I’m quite the jolly chap, so I could come along. This means my opinion is now of course law as far as the topic goes. First short observation: you don’t necessarily have to visit Porto for the big sights, although there are plenty. Here you can stroll around for days and just enjoy the atmosphere, without having to set foot into one single church, museum or other attraction if you happen to be a philistine who doesn’t feel like it. The entire city centre is a lively mix of colourful facades, bars and winding little alleys. Fun place, in short.

Porto’s been a popular city trip destination for years, but the rest of the north of Portugal is less known. The local tourist office clearly wanted to something about this, because before we ended up in the big city we travelled all over the countryside for three days. Of course, this decision was not made by accident. Carefully building up to that grand finale is always better than shooting all your guns at the start. We visited a number of smaller but no less cosy cities, and went on a trek through the only national park in Portugal. Also quite nice was the vinho verde. This is a very typical wine from the region with a bit of a sparkle to it – even the reds – which makes for quite the refreshment. Perfect wine for a summer barbecue. Now let’s get on with it before we completely get off track. Here are six sights in Porto and the north you should definitely visit when there. You’re welcome! 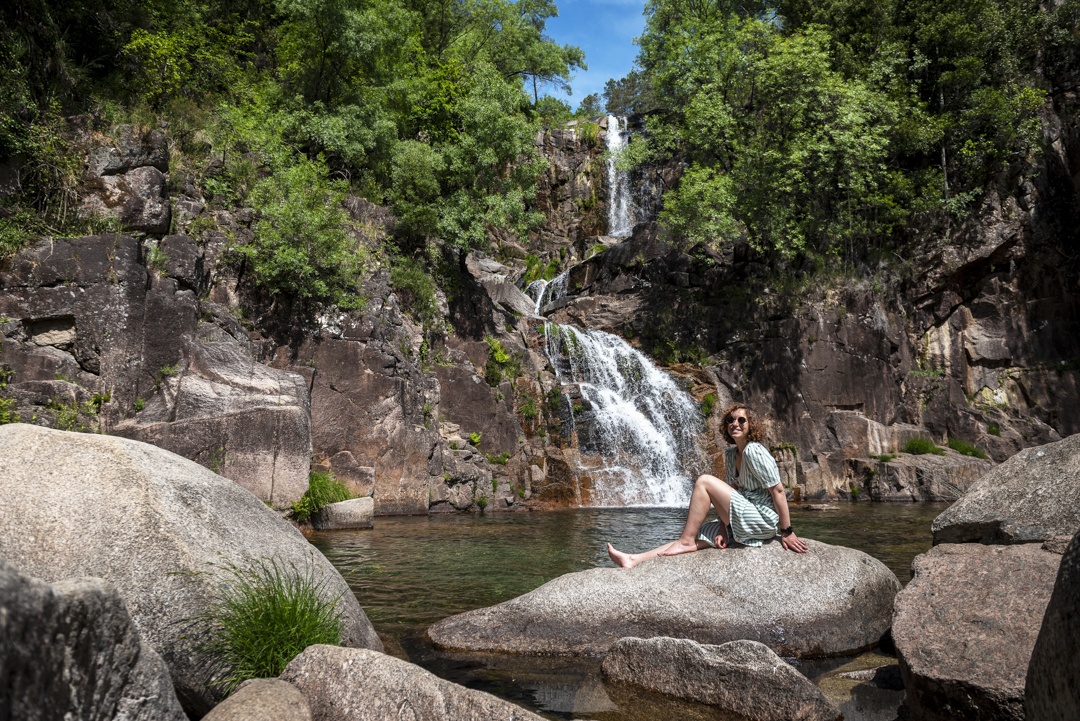 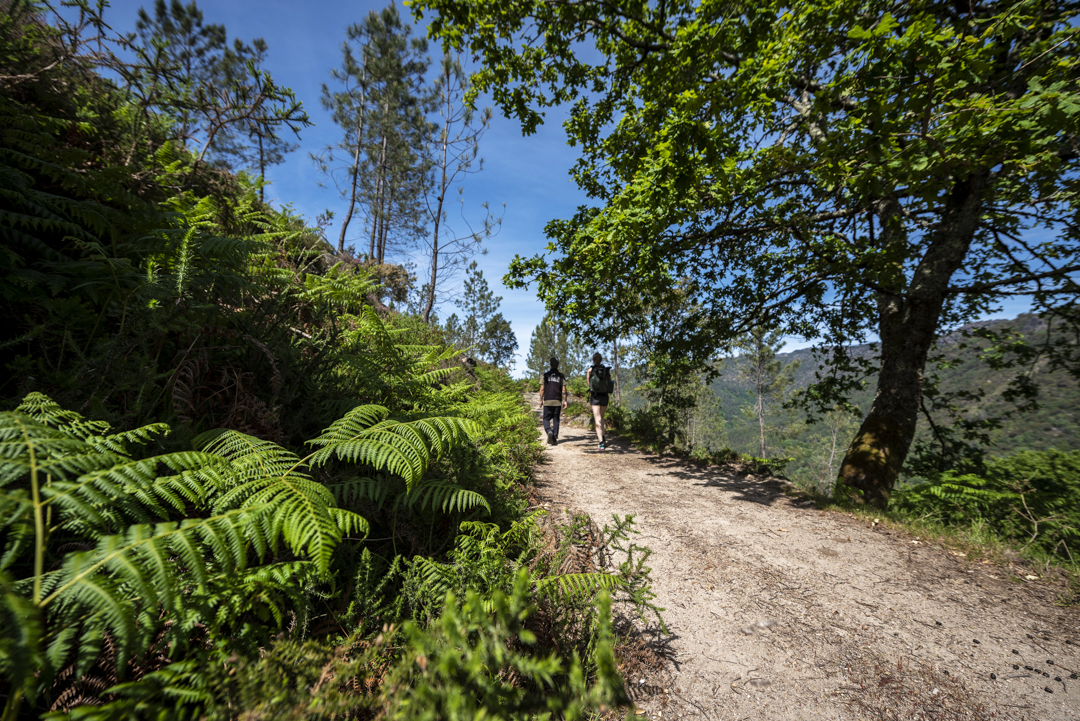 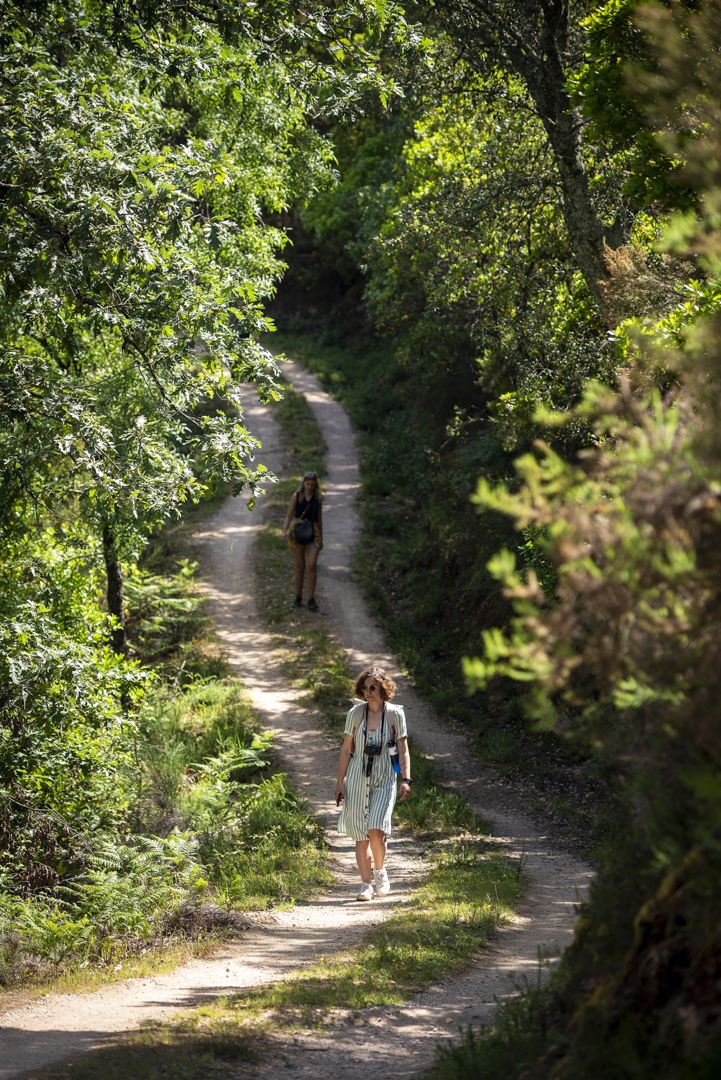 Portugal only has one official national park, but it’s worth the visit. Parque Nacional da Peneda-Gerês stretches out over the mountains along the Spanish border, making for a vast, wild area full of jagged rocks, forests and little rivers. Some wolves still roam around here, and they know all about it in Fafião village where our hike started. Here you can see an ancient stone wolf trap they used to corner and finish the animals, who were seen as a threat to livestock. These days, wolves are protected, and the local shepherds stay in the mountains with their cows in summer to prevent nightly raids. Those by the way, are impressive ginger beasts (like me) with a solid set of horns (unlike me). No wolves in sight during our trek, and so after a walk through the forest and over winding dirt roads we ended up unscathed at the Cascatas de Fecha de Barjas. This is a waterfall ending up in a picturesque pool full of large flat stones, where you can go for a (skinny) dip if you need one. Sadly I wasn’t able to convince anyone. Wonderful place nonetheless. 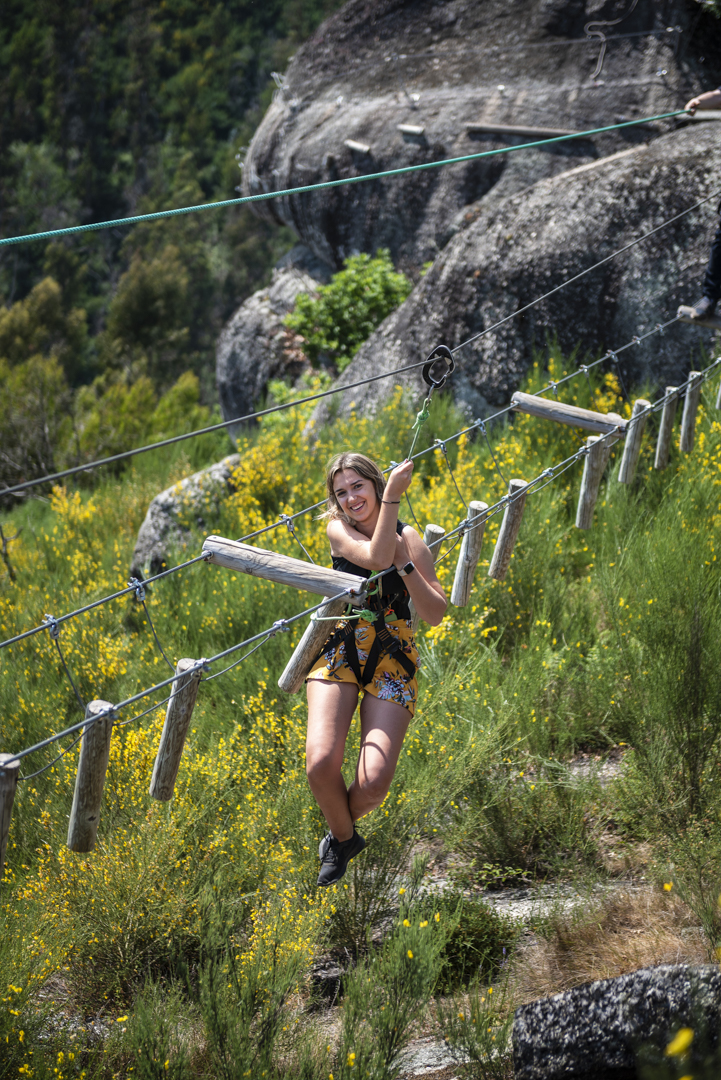 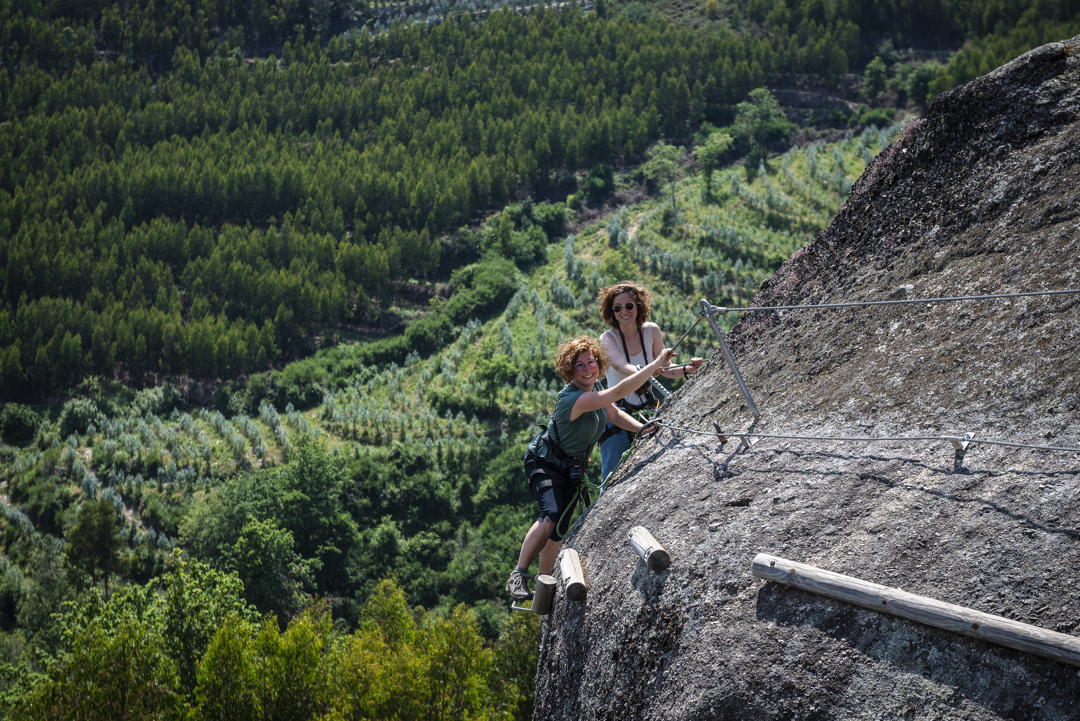 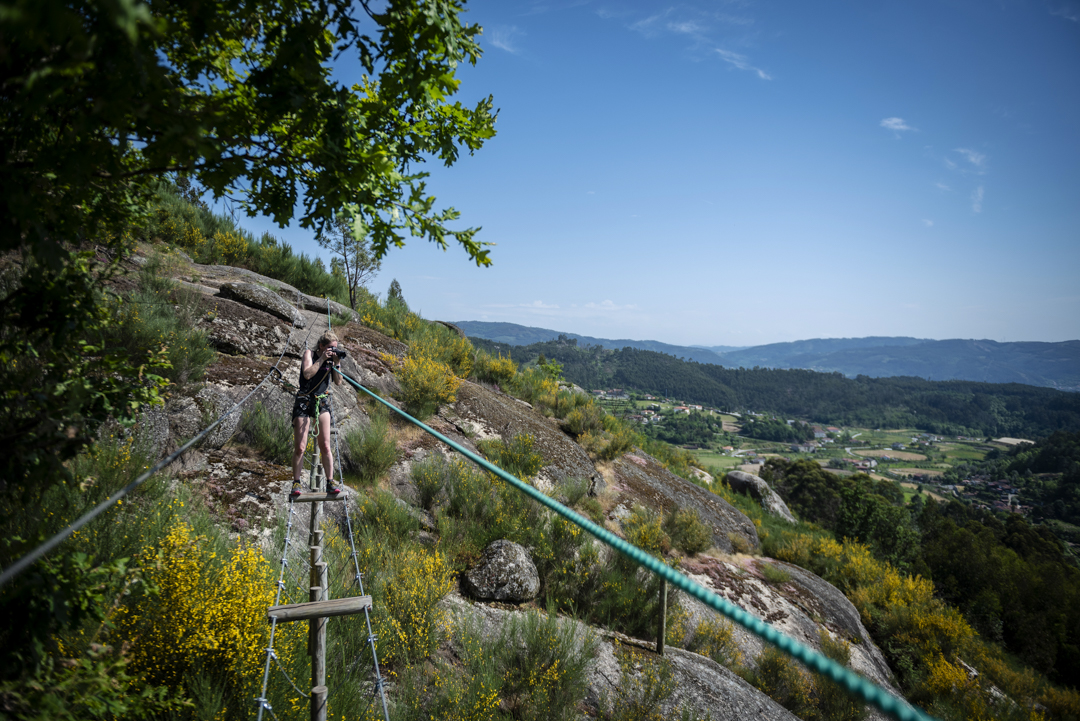 Are you a real alpha and far too tough for your standard walk through a wolf infested forest? Then head to the nearby DiverLanhoso Adventure Park instead. Here, in a 170ha nature reserve, you can test yourself on a variety of breakneck activities. Feel like gliding hundreds of meters down a hill on a cable? Want to traverse an obstacle course through the treetops? Maybe aim a couple of paintballs at your best friend’s crotch? It’s all possible here, and it’s relatively safe as well. We went for the via ferrata. This is a climbing course where you make your way over rickety bridges and steel hooks along a steep rock wall – while secured by a cable of course. This turned out to be slightly scary but quite nice, until a certain Sanne D. decided to slip through one of the bridges to helplessly dangle above the gaping abyss until a couple of rescue workers freed her from her precarious situation. Fun time over indeed. www.diver.com.pt 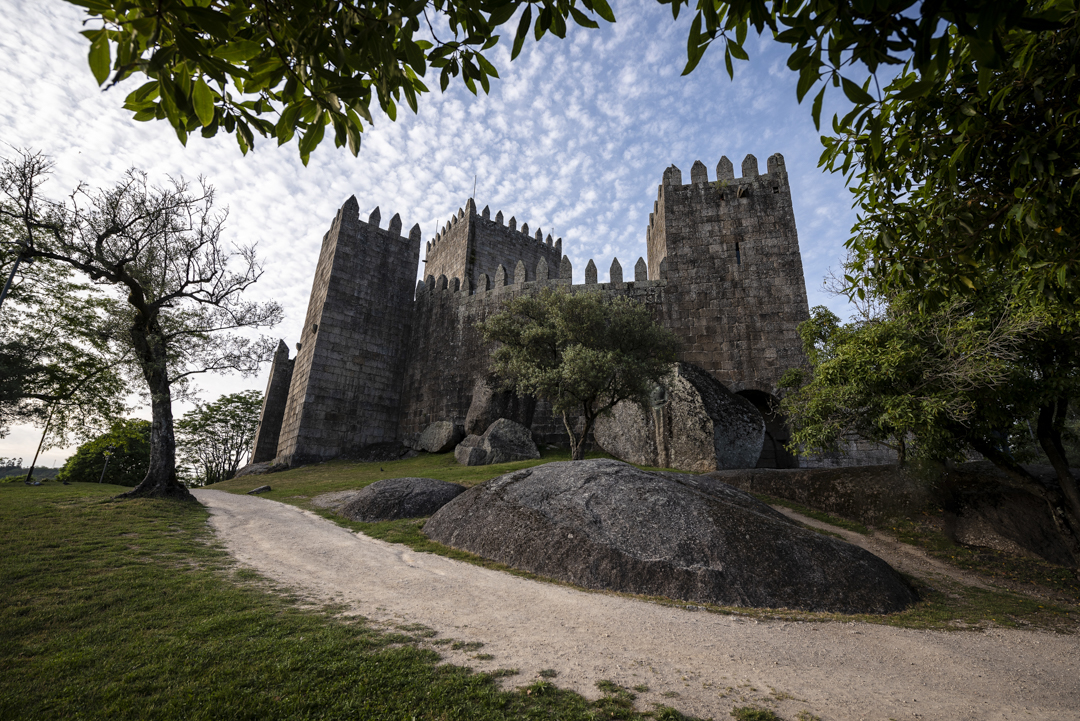 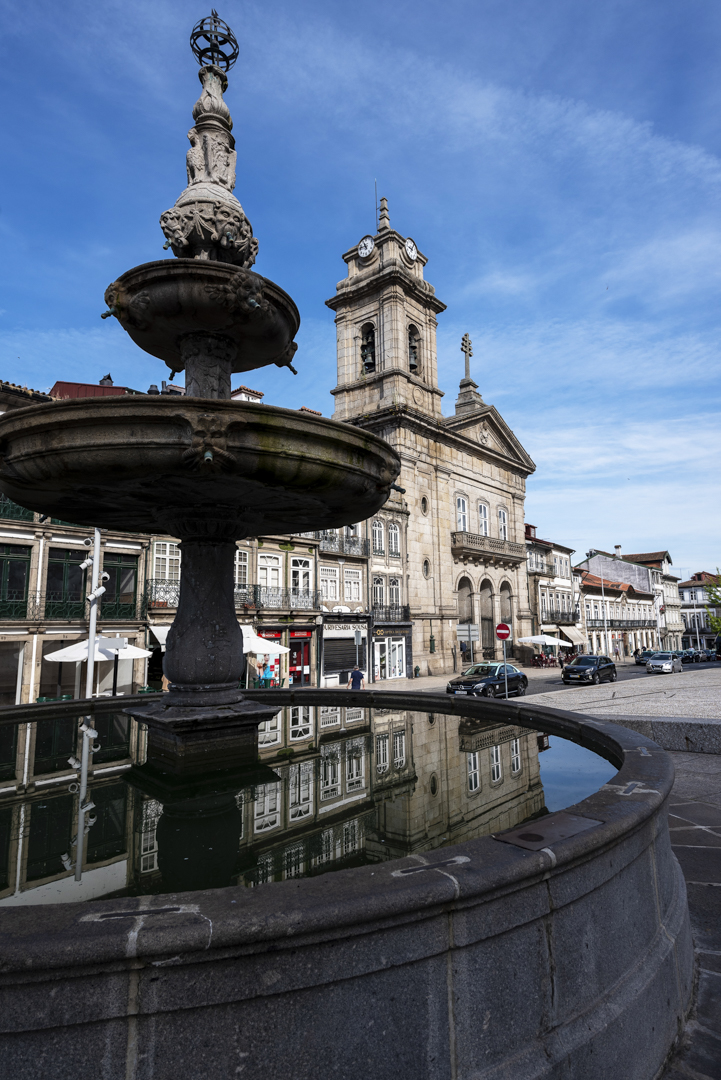 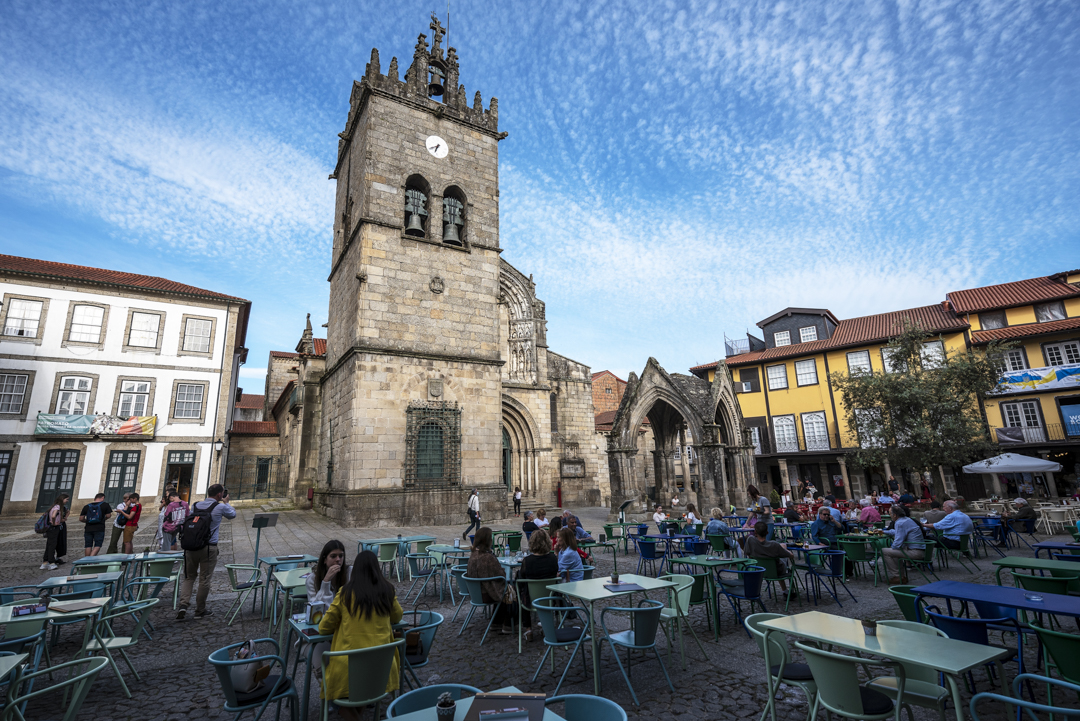 Before we all arrived in Porto, we visited a number of smaller towns in the area. The most famous of these was Guimarães. This is not only the place where the first king of Portugal was born – and therefore the proverbial cradle of the country – it was also the European capital of culture in 2012. The historic centre of Guimarães was recognized as Unesco World Heritage: narrow streets full of stately mansions, wrought iron balconies and a lot of old churches and monasteries.  On a hill above the city you’ll find a sturdy medieval castle next to the ducal palace. We stayed in a little palace of our own. The Conquistador Palace Hotel just opened, is owned by tennis player João Sousa and has a lot of rooms that would not look out of place in the mansion of some oil sheikh. Slept well, and all in all it isn’t overly expensive for what you get.  Bragança is a similar town that also comes with a very well preserved and walled inner city (including castle). Nice to visit, but more so for those on an actual road trip. It is a few hours’ drive from Porto.

4. Lose yourself in Porto’s streets 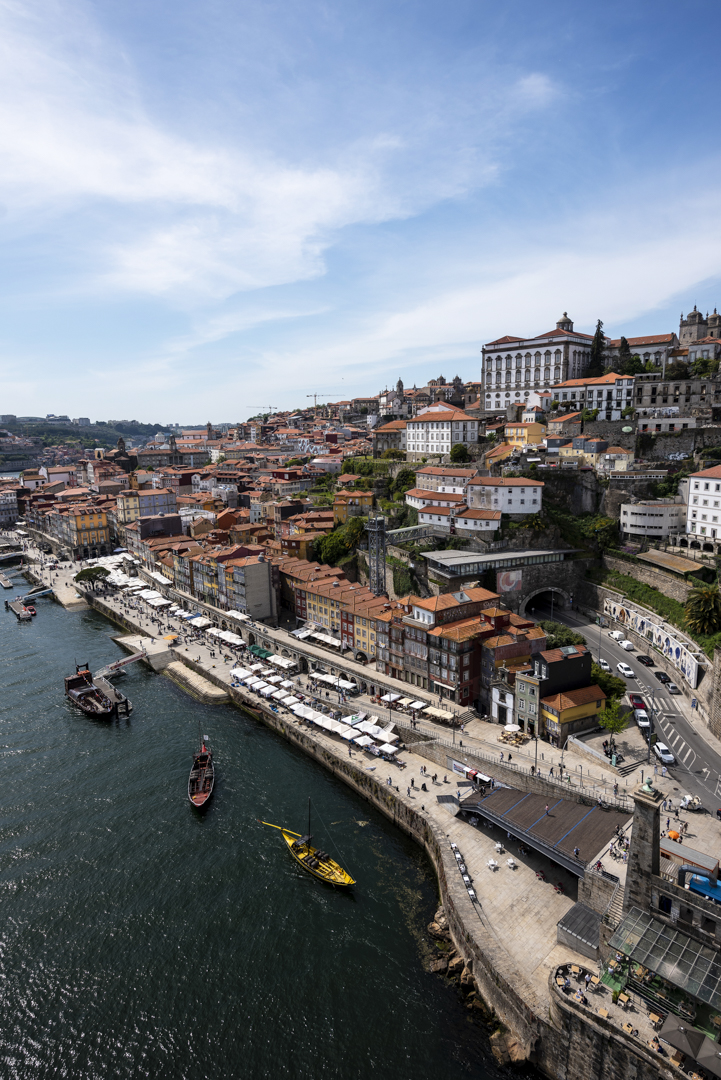 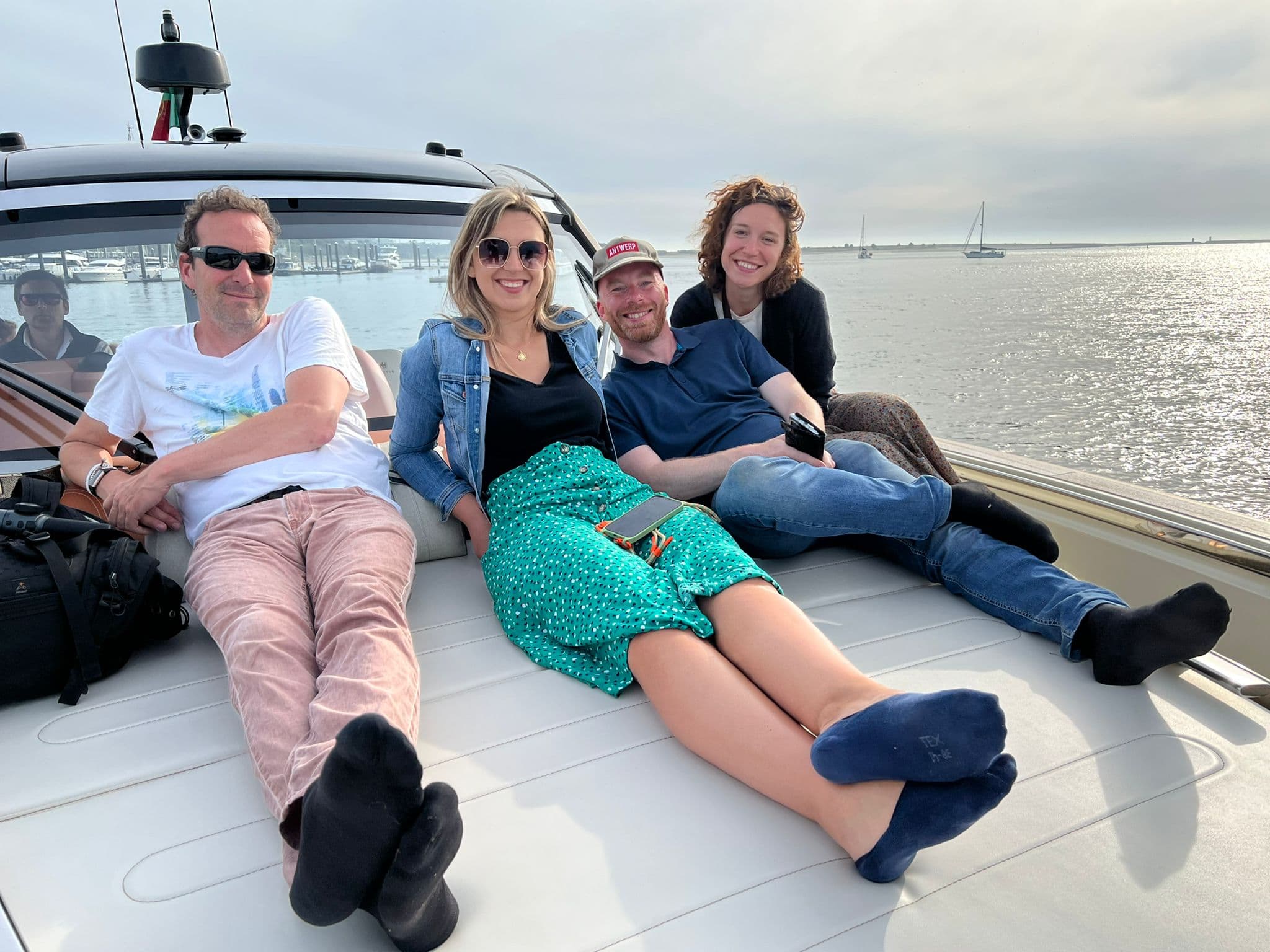 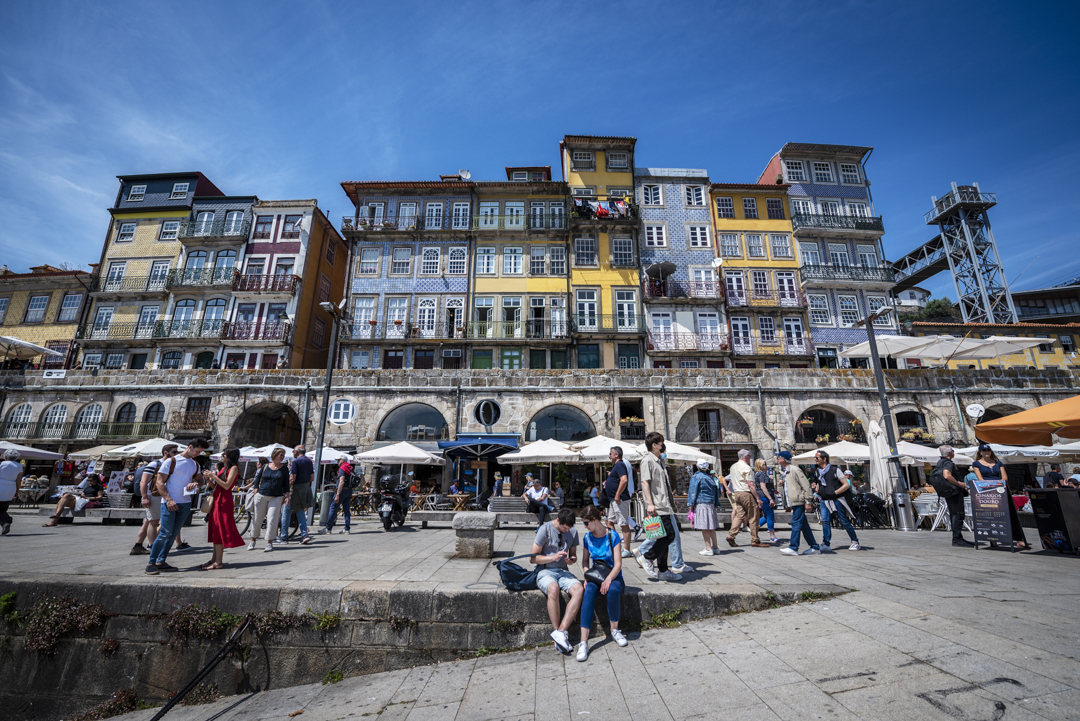 Let’s talk about the big city now. Since we ended up staying for just a day and a half, we didn’t visit too many of Porto’s main sights. The visit was more focused on the general atmosphere and experiences. We did pass the beautiful São Bento Station and the Carmo and Carmelitas church which is full of beautiful blue tiles. We also briefly visited Sé Cathedral and walked to the magnificent waterfront through the colorful Ribeira district. From Ponte de Dom Luis I, which stands 45m above the Douro, you’ll enjoy a fantastic view of the entire city, which was built surprisingly high against the hills. To make things a bit more decadent, we went for a river cruise with Invicta Cruises – straight under the city’s six iconic bridges. These guys don’t cram you into some raggedy tourist boat, but in a brand new yacht, allowing you to watch the sun set over Porto from a soft mattress with a cocktail and some snacks in hand. No complaints, but then again, I didn’t have to pay the bill. www.invictus-cruises.com

5. Taste some port in Porto at Casa Ramos Pinto 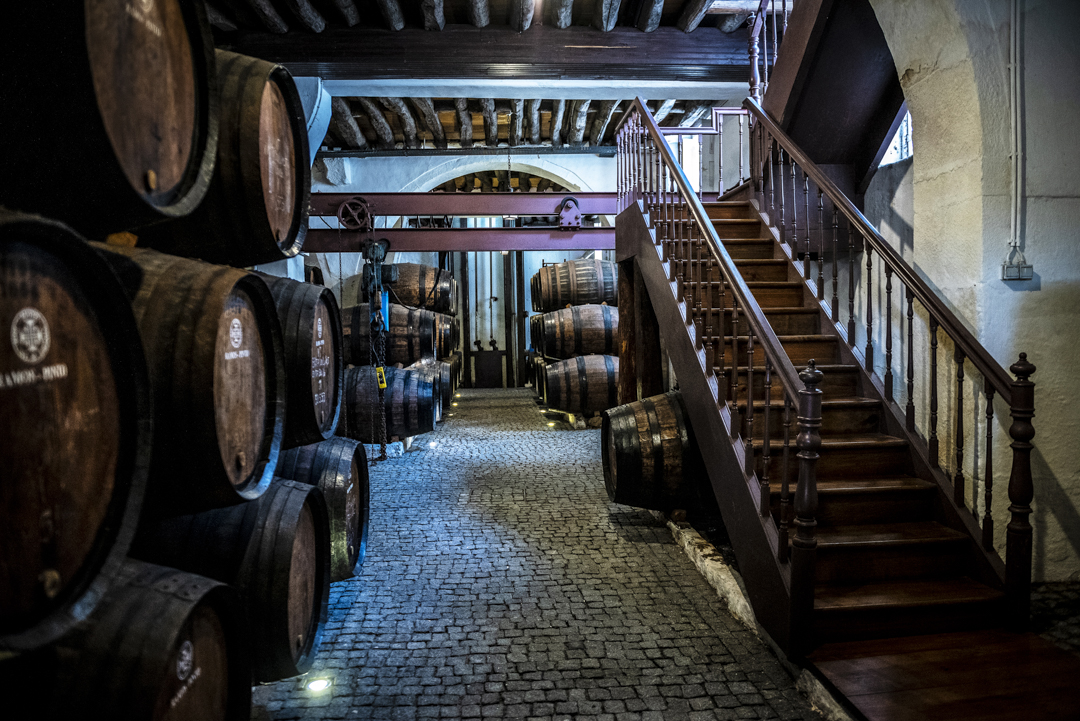 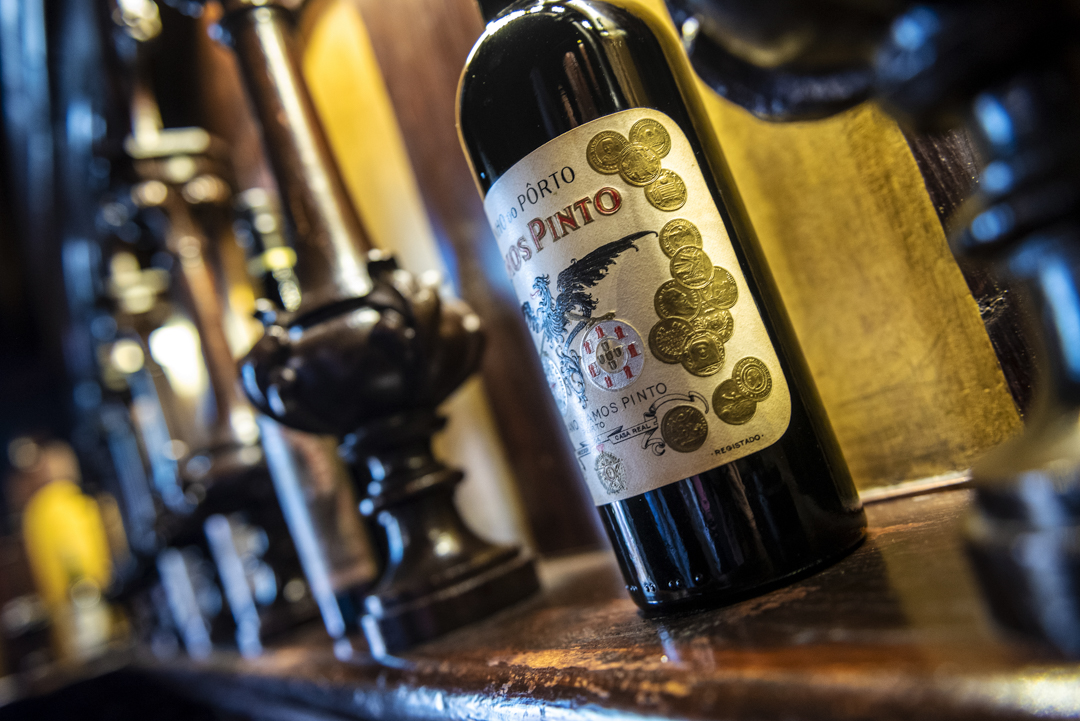 There’s of course much more to see in Porto than what we were able to do in a day and a half. Here’s a short selection of what will be on the program for me next time: Igreja de Sao Franciso and Santa Clara; the Agramonte Cemetery; the modern Casa de la Musica and (why not) some of the many museums. What was planned though, was a visit to one of the many port houses – which can mainly be found on the other side of the river. We chose Casa Ramos Pinto – near the Ponte Luis I bridge on the waterside. Ramos Pinto was founded in 1880, and once half the port shipped to Latin America was produced here. In addition to the cellars and the tasting room, you can also visit the family’s original city palace. There, the company’s history is explained through a number of nicely decorated rooms, with a number of original advertisements on the walls – which were quite controversial for the time. We tasted three different varieties of port. I personally liked the white Adriano best. Five stars! www.ramospinto.pt 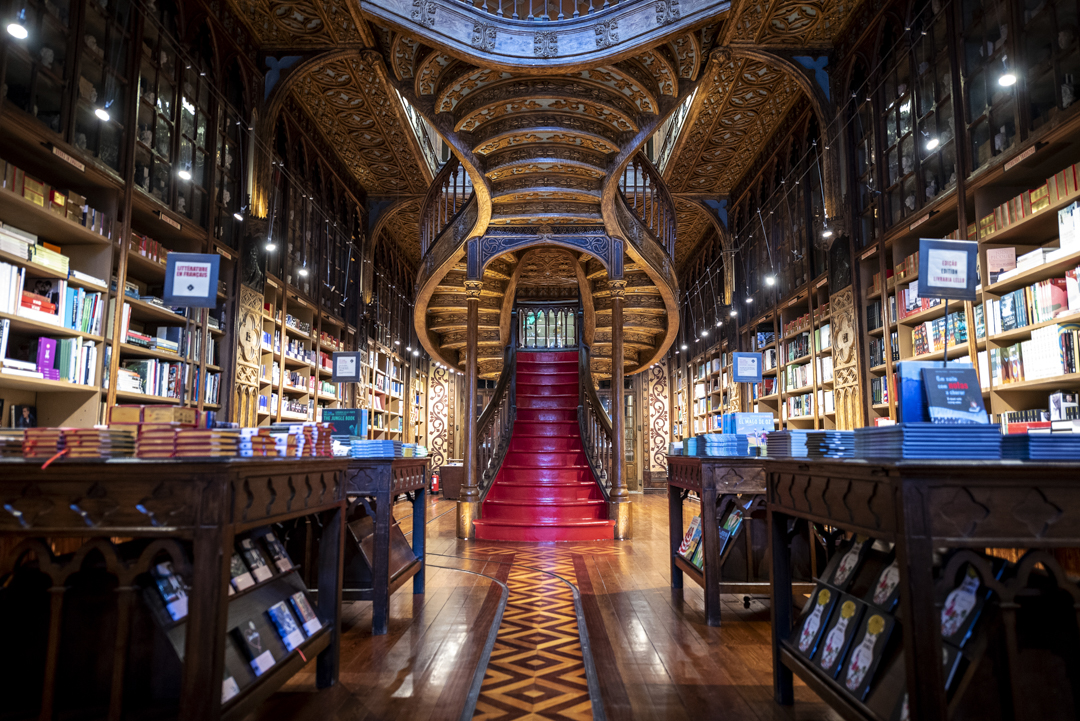 Although time was short, we just had to make one last visit. Livraria Lello is one of the most unique sights in Porto, but it is also one of the busiest. This historic bookshop is located in a truly fantastic building, with the monumental wooden staircase leading to the upper floor as its masterpiece. Livraria Lello was always popular, but this popularity skyrocketed to unfeasible levels when the rumor surfaced JK Rowling found inspiration for her Harry Potter novels* here. This claim is probably total bullshit, but ever since there’s been a long line of impatient tourists waiting at the door every morning.  Unfortunately, these guys took selfies exclusively and bought a grand total of zero books on average, and thus a €5 entrance fee was asked. Don’t worry, you’ll get your money back as soon as you actually buy something (for those in need of a quick gift: they sell some beautiful gilded pocket versions of all kinds of classics). You’ll probably never get the chance to see Livraria Lello as it is pictured here (by which I mean completely empty). After some back and forth, we were allowed to sneak in before opening time. Even better than the actual pictures, were the faces of the people in line I promptly passed. Perks of the job.

*Several cities have such a story. In Edinburgh for example, I heard the same thing about a local cemetery ten years ago. Yes, it’s also popular now.

Hotels in Porto and the north of Portugal 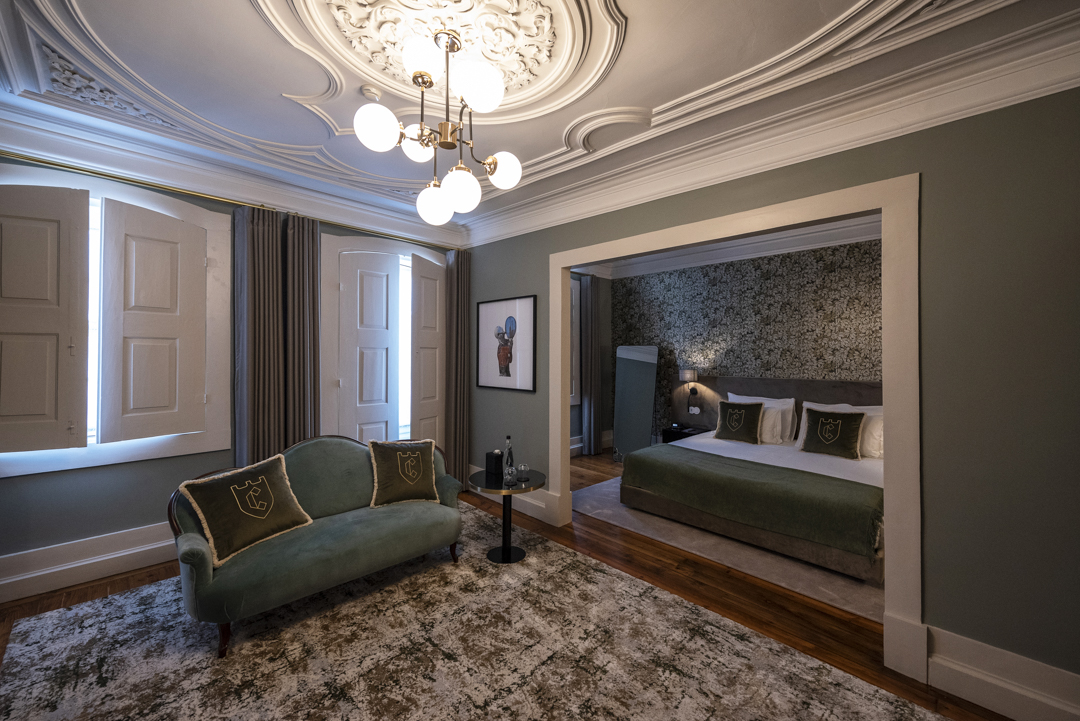 In Vila Praia de Âncora we sat down for a great lunch at Hotel Meira: a family hotel with quite the history.  www.hotelmeira.com

In Guimarães we slept (as mentioned) in the beautiful Conquistador Palace Hotel.  www.conquistadorpalace.pt

In Bragança we stayed at Pousada de Bragança: a historic hotel overlooking the old town, which houses a Michelin restaurant.  www.pousadas.pt/nl/hotel/pousada-braganca

In Porto we slept in Hotel Dom Enrique, which looks like an ugly tower from the outside, but is nicely decorated inside and has a 360° restaurant on the top floor offering a view of the entire city. You also have rooms with an open balcony here, which is a rarity nowadays. There’s always some businessman who just lost it all staying somewhere. www.hoteldomhenrique.pt

For more information about Porto and the North of Portugal, visit: www.visitportugal.com/nl/destinos/porto-e-norte

Fancy a few other European city trips? Then read my blog posts on Lodz, Dresden, Carnival in Tenerife or Amsterdam. 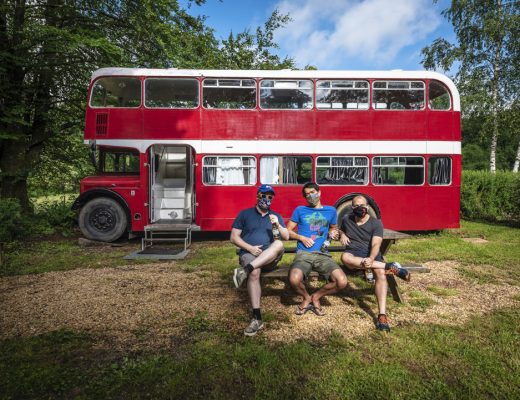 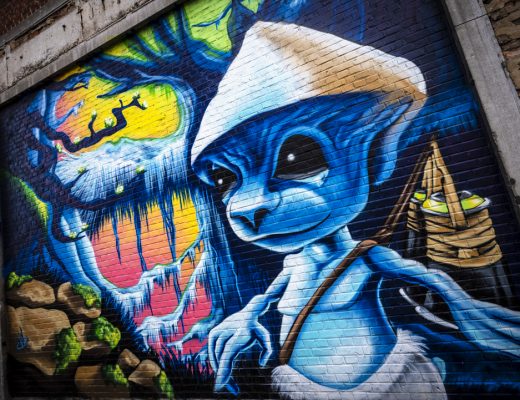